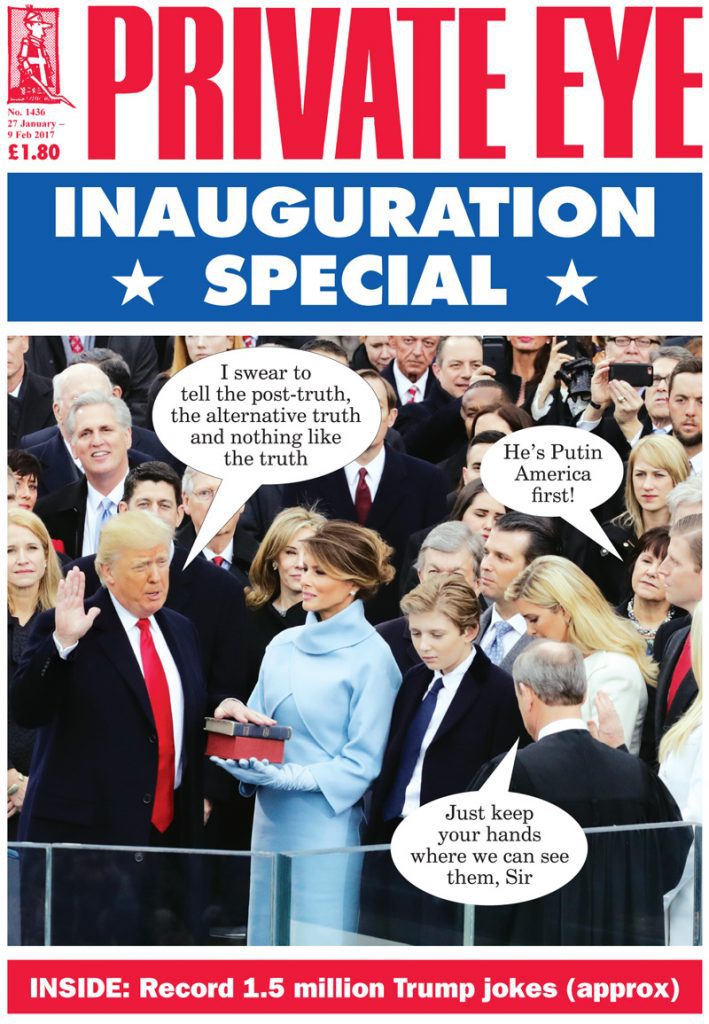 This is an article by Robert Minton-Taylor.

This week’s front cover (27 January 2017) of Private Eye has a picture of Donald Trump with is wide Melania and assembled family looking very reverential at his inauguration as the 45th President of the United States.

The caption, as only Private Eye could, says: “I swear to tell the post-truth, the alternative truth and nothing like the truth.” Another couple of bubble captions on the same page say: “He’s Putin American first” and an aide saying: “Just keep your hands where we can see them, Sir”.

Given the awkward hand holding between our British Prime Minister Theresa May and Donald Trump at the White House, Washington (yes I have remembered it’s ‘Theresa’ not ‘Teresa’ the ex-porn star who mistakenly received an invitation to meet the Donald) it’s an appropriate caption.

Post-truth, false news. Where is all this heading for PRs?

Well as one editor-in-chief of an influential global B2B magazine said to me: “Well that’s what PRs have been engaged in for time immemorial, isn’t it Robert?” He was half jesting, referring to the fact that a PR’s job is to put their client product or service in a positive light and to gloss over or overlook the less than savoury aspects of their client’s business.

But for Donald Trump news isn’t quite like that. It’s a very skewed version of what journalists think it is. And it’s worrying. No, it is really scary.

According to the Daily Mirror (a national UK red top paper) Donald Trump and his team have a “casual relationship with facts”.

Mikey Smith, a political reporter for the Daily Mirror, said: “The new President’s first days in office have been notable for two reasons. Firstly, it says he has the worst approval rating for an incoming President in recorded history. CNN reported the figure today (27 January 2017) at 36% favourable – and that figure has gone down since he took office. Secondly, he and his team have – on an almost daily basis – trotted out a string of false statements.

“When we say false, we don’t mean misleading statements, or something that stretches the truth to spin the perception,” says Smith. “We mean easily disprovable falsehoods. The kind of thing you can debunk in five minutes on Google.”

The Oxford Dictionary describes post truth as “an adjective relating to circumstances in which objective facts are less influential in shaping public opinion than emotional appeals.”

Google and Facebook have both landed in hot water for failing to stop fake news.

After initially claiming that there wasn’t a fake news problem, Facebook has announced that it is to tackle misinformation across the social media platform.

Facebook CEO Mark Zuckerberg said: “We will be ramping up efforts to improve detection, reporting and verification, as well as working closer with journalists and making it harder for spammers to share their content.”

Some of the biggest anti-Hillary, pro-Trump stories, says Buzzfeed, included a report that claimed she had sold guns to Isis and another saying that the Pope had endorsed Donald Trump.

Nic Newman, a research associate at the highly respected Reuters Institute for the Study of Journalism reported that: “51% of people in 26 countries say they use social media as a source of news each week. Around one in ten (12%) say it is their main source. Facebook is by far the most important network for finding, reading/watching, and sharing news.

His report went on to say: “Social media are (sic) significantly more important for women (who are also less likely to go directly to a news website or app).

“More than a quarter of 18–24s say social media (28%) is their main source of news – more than television (24%) for the first time. 62% of US adults get their news on social media. Crucially, and pointing to low media literacy Newman says that more than half of the time people aren’t aware which outlet’s news they are reading.”

For citizens not to know, or deeply care, where their news comes from is worrying in an open society.

Emma Rispoli, an account director at MHP, one of the UK’s leading PR and public affairs consultancy and rising social media star said: “While steps by Facebook may dampen their impact, organisations outside the realm of politics could also be impacted if “post-truth” reporting takes root. Those with a strong reputation will be best placed to counter misleading claims or outright lies – but PRs and heads of comms shouldn’t just look to fatten up their coverage books.”

She went on to say in her blog: “The front page of The Times (of London) or The New York Times won’t reach those denouncing experts, but Facebook might. Social media platforms aren’t just where fake news abound; they’re also a platform for organisations to build goodwill.”

Rispoli makes a compelling point. So where does this leave comms professionals in the post-truth world?

My advice? Stick to the facts i.e. the real facts and source them like any self-respecting academic would do. Don’t spin – I know that’s like asking a F1 driver to stick to the speed limits – but if you hype your ‘news’ with purple prose and use overblown words like amazing, brand new, greatest, unique (and by the way nothing is unique, except God because there is only one of him) don’t be surprised if you are cut down to size by a journalist.

My journalistic training taught me to treat what interviewees told you with a certain amount of scepticism until the facts could be checked with a third party. “Check, check and check again” I remember my news editor telling me. In my early days of reporting news several of my stories were binned because I could not verify the facts, particularly from a third party.

The best way to ensure you are taken seriously is to stick to the who, why, what, where, when and how formula of writing and pitching stories to journalists. And add in a sixth ‘w’ to judge where your story will make it pass the delete button. “Why should anyone care” about your story?

Journalists will respect you if they trust you. Break their trust and you’ll end up stuck in a quagmire. Journalists don’t forget. Believe me if you cross that grey line between spin and reality there is no going back.

Many a time I have been given the benefit of doubt by a journalist when a particularly punchy story was about to break the nice cosy image you had created for your client by giving you time to figure out what was fact and what was fiction and get back to the journalist with the ‘real facts’ before the story broke.

Sometimes it’s not easy especially when, according to the Institute for Crisis Management in Kentucky, US, almost two out of five bosses (39%) fail to keep their word and that the cause of 49% of crises are caused by management as against 33% by employees and 18% by ‘outside forces’.

Donald Trump and his entourage will meet their match one day. No self-respecting journalist or news organisation is going to put up with post-truth antics for too long. When the wall of untruths starts to crumble he and his cohorts will be laid bare for all the world to witness and it won’t be a pretty sight.

Fear not, the truth will always out but it might take days, weeks, months or a few years. Social media will help facilitate it. There will be nowhere to run or hide.