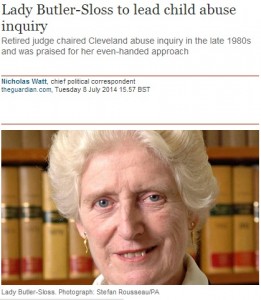 An article by Robert Minton-Taylor

We are undergoing something of revolution in the UK. We are at last coming to terms with our unsavoury past.

Already one so-called ‘PR guru’ has been jailed for eight years for a string of indecent assaults against girls and young women. On 1 May the 71-year-old Max Clifford became the first person to be convicted under Operation Yewtree. Unfortunately, he won’t be the last.

Last Sunday the former Conservative cabinet minister Lord Tebbit admitted on the BBC’s Andrew Marr programme that there may have been a political cover-up of child abuse allegations against politicians in the 1980s. He said the collective instinct of establishment figures at the time was to protect “the system” and not to delve too deeply into claims.

He continued: “At that time I think most people would have thought that the establishment, the system, was to be protected and if a few things had gone wrong here and there that it was more important to protect the system.”

Today one for our most respected retired judges, Elizabeth Butler-Sloss, 80, has been named as the chair of a wide-ranging review into historical child sex abuse. Lady Butler-Sloss led the Cleveland child abuse inquiry in the late 1980s.

Back in the 1960s as a 14-year old studying at a public boarding school (if you are a non-UK citizen read this as a private school) I was sexually abused by my housemaster who ironically was also the school’s biology teacher. It has taken me 50 years and the death of my parents to be able to finally admit publicly what happened to me.

I appreciate that we live in a different age, but in my day sexual abuse was covered up to protect the powerful i.e. those in authority, or at least was never spoken about. I never spoke about it to my parents because I was too ashamed.

Indeed, a former prefect at the school I studied at called me a year ago at home to solicit donations for new facilities at the school. When I tried to politely explain what had happened to me and why I would not be contributing to the school funds he just said “well it was considered part of the growing-up process.” I put down the phone on him.

Groping was a regular occurrence

Many women in PR have told me that ‘groping’ was almost regular occurrence in PR consultancies and advertising agencies in the 1970s, 1980s and 1990s and, I dare say, in the 2000s.

I mention all this because no PR student on a work placement or an internship should ever feel compromised in a job now or in the future. You need to report any unwanted sexual or other advances immediately to your chief executive or if it’s an in-house department to the HR department.

Sexual abuse in whatever form it takes and however minor the offence is wholly unacceptable. Those that perpetrate such acts have no place in public relations.

My story has a happy ending. Six months ago I wrote to the ‘new’ headmaster of my former boarding school. The reply I received meant I could finally draw a line in the sand and move on. It was a full and frank apology for what happened to me and an assurance that my housemaster’s name would not be mentioned again in the alumni list of the good and the great who taught at the school.

As Bob Dylan aptly wrote “The Times They Are a-Changin”.