So you want to work in… Celebrity PR? 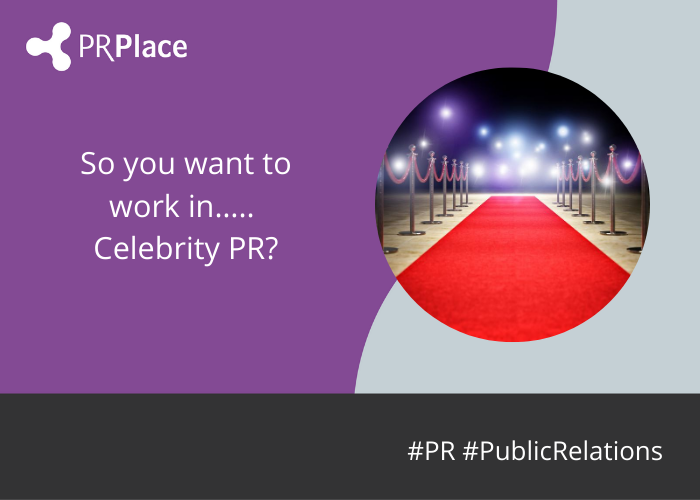 Celebrity PR can take a number of forms, all of which concern enhancing the fame, reputation and ‘brand’ of a public figure.

The most basic is a ‘press officer’ function, which generally involves reacting to media requests and coordinating bursts of publicity around your client’s projects, usually in partnership with other stakeholders – production company, film studio, record label – and often another agency who look after the project. This is the most likely entry-level celebrity PR job and will involve monitoring coverage of your client, analysing it for sentiment, and sending any corrections or clarifications required, as well as fielding media requests, liaising with partner companies, managing interviews, ghosting public statements and, depending on the client, perks like early sight of a film or television show, accompanying them to media appearances, screenings, premieres or album launch parties (but again, this varies wildly depending on client and working environment).

This function is pretty basic and only really applicable to established names whose career and reputation are at a point of manageable equilibrium. Other forms of celebrity PR are more complex.

Firstly, a budding star whose career is on the rise or a veteran on the wane and in need of an age-related reinvention may hire a publicist to push their reputation aggressively and keep them in the spotlight near constantly. This role is more involved than press office services, often involving a close relationship with an agent or manager and usually expanding beyond media relations into more in-depth reputation management such as which causes and charities to support, what view to take on current events, what issues to speak on, which brands to work with, feeding into social media strategy.

The third and final form of celebrity PR is the most complex and challenging: the dark art of crisis and reputation management.

This differs from the other strands of the discipline in that those are primarily about projection; a celebrity engaging a ‘press office’ style publicist or an agent / manger adjacent publicist is generally happy for people to know that they have someone dedicated to promoting them: the more noise the better.

But a celebrity crisis and reputation manager’s job is more to do with protection, more defence than attack. Services can range from keeping a person or incident out of the media, mitigating the damage of something that’s already public knowledge, rehabilitating a damaged reputation through acts of subtle penance and high-level relationship (re)building, or representing your client in a dispute (either legal or in the court of public opinion). These issues are all sensitive and privacy, discretion and the confidence of top level media contacts are required to do the job successfully, making this particular service mostly the preserve of vastly experienced celebrity publicists and reputation managers.

How do I get into celebrity PR?

Work experience in PR is the most direct route into agencies dedicated to celebrity PR, with other useful skills including social media channel and content management, and talent management agency or television production work experience.

Probably the perks mentioned above; parties and premieres. You also get the ultimate ‘behind the scenes’ insight into the real lives of celebrities and their industries – a level of access even celebrity journalists can only dream of. From a professional standpoint, ‘Celebrity’ is still probably the number one news value and the biggest media sub-industry so there’s the security of knowing that if you want a story out there and your client is reasonably well-known and liked within a particular audience, then it’s highly likely that worthwhile outlets will pick it up. Few other areas of communications enjoy this luxury.

Are there any drawbacks?

When emphasising above that the perks ‘depend on the client’ that’s because celebrities can be difficult. These are people who are used to being the most important person in the room, ill-accustomed to being told ‘no’ or having their world view challenged, and who often have a bubble around them which cannot easily be penetrated by home truths or common sense.

If you choose to work in celebrity PR you need to be thick skinned and sharp-elbowed but also able to bend the knee and walk on eggshells where appropriate.

If that image is confusing and manic then it’s probably a fair representation of a career trying to calibrate a celebrity’s public image with their ego.

What’s the difference between doing it in house or in an agency?

In-house celebrity publicists tend only to work on a small number of clients but to perform the second or third functions described above. The relationships are a lot closer and higher maintenance, and the work a lot more in-depth, but for fewer people, meaning that your influence tends to be weightier and level of trust higher.

If you work in an agency, especially earlier in your career, you are likely to be carrying out more of a press officer function at least initially, and build relationships and trust with celebrities throughout bursts of activity on a particular project. .

Is Celebrity PR right for me?

Celebrity PR is more about personal and organisational skills – managing journalist relationships, egos and packed schedules – than creativity or editorial insight. You need to be a highly resilient, highly organised people-person who worships show business but is comfortable in its highest echelons. If you have all these attributes then a career as a celebrity publicist is a potentially rewarding and star-lined path to becoming a vital player in that world.

celebrity Sectors So you want to work in PR?