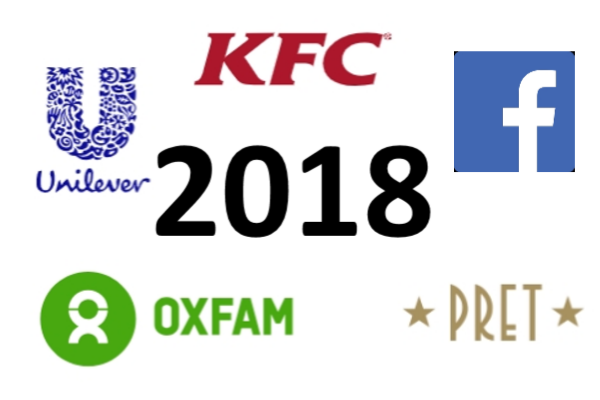 It has been a corker of a year for crises. And much as Tolstoy wrote that all unhappy families are unhappy in their own way so too with the mistakes made and the lessons we can learn from each individual crisis. From broken brand promises to possibly fatally flawed business models there is much this year for the student of crisis communications to pick over. Here’s my top five.

The worst possible crisis. Someone died. And as if it could be any worse it was a young girl aged just 15 who died in her father’s arms. Pret’s brand promise is around wholesome, natural food which unsurprisingly led many of its stakeholders conflated with pure, honest and transparent.

As it turned out the ingredients in Pret’s products were not as transparent as consumers assumed and labelling for allergens was absent. Awareness of allergies has grown in the public consciousness in recent years, so it should certainly have been on Pret’s radar that its products did not carry labelling of this kind. This is a lesson for corporates to pay attention to evolving issues in society and heightened customer expectations.

Once the crisis became public at the inquest into Natasha Ednan-Laperouse’s death, Pret struggled to do the right thing and time was lost.  Contact was made with the victim’s family (it’s amazing how many crisis-hit organisations fail to do this) but it was some months afterwards.

Pret sought to broaden the issue seeking not only to put its own house in order but to campaign for other companies to do the same. As a crisis communication strategy this is known as transcendence or as a past CEO of mine used to say “flip it up” – broaden out an issue affecting your organisation into a wider one for everyone. Fortunately, this cause was also taken up by Ms Ednan-Laperouse’s family.

As often happens with a crisis of this kind another case soon emerged of a death as a result, it was alleged, of Pret-stocked food. This time Pret sought to shift the blame onto a supplier with inevitable results in terms of brand damage. Pret has experienced rapid growth and a number of changes of ownership in recent years all of which are likely to be bringing pressure to bear on maintaining its image of doing the right thing.

Another food-related crisis but fortunately not as serious and which came with a refreshingly brave crisis communications approach.

KFC changed its logistics partner and the switch did not go well. The chain was left with no chicken in many of its outlets as its new partners struggled to deliver the product to where it was needed. A fried chicken restaurant with no chicken was a gift for the media. KFC was silent at first, but customers were not. At least one police force claimed members of the public had called the emergency services to complain!

At that point the crisis had begun to take on a comic edge which KFC’s ad agency, Mother London, played right into. KFC took out full page ads apologising for its screw up cleverly mixing up its brand initials and leaving us to do the rest.

Humour rarely works in crisis situations, so it is not up there as an obvious communications strategy to take.  It worked for KFC because firstly this was not a particularly serious crisis. It was more of an embarrassment to the brand.

To use the language of Timothy Coombs, one of the foremost crisis theoreticians, KFC was a victim (although it did not make the mistake of seeking to shift the blame onto its logistics partners) and there were no ‘intensifying factors’ i.e. KFC’s past reputation is neutral to positive.

Remember this analysis if your senior leadership team are tempted to use humour in a crisis – it can easily backfire.

I have written about this crisis before but it is clear it is one with a very long tail and continues to rumble on.

In terms of lessons learnt it is a perfect demonstration of the adage that the cover up can be worse than the crime.  When Oxfam senior management learnt back in 2011 that executives it had employed to help the people in Haiti suffering the after effects of a natural disaster had used their position to exploit vulnerable young women they had a choice to make: did they go public with what had happened by making an example out of the perpetrators or did they quietly let people go leaving them free to move to other similar charities and situations? We all now know what choice was made.

If a management team ever faces a choice of this kind a simple maxim to follow is to put the victims at the heart of the decision. The vulnerable young women in Haiti were victims who deserved to see Oxfam take seriously what had happened to them and do all it could to prevent it happening again.

Oxfam are still suffering the consequences of this particular crisis. It has lost funding from governments and from the public. It is now considering its future which involves a long planned relocation of its international operations from the UK to Africa (as you will see from this link a move that has attracted some controversy).  This story could run and run and not just for Oxfam.

Charities tend to work with vulnerable people and we now know that this type of work attracts the bad as well as the good. Safeguarding is now a concept we are all hearing of more and more and charities can no longer expect that their good works protect them from the sort of scrutiny corporates have been used to for years.

As Madhumita Murgia, writing in the Financial Times, observed the other day – until recently we tended to equate technology with progress.

Technology firms were often thought of as being a force for good. But now we talk of ‘big tech’ in the same way we talk about the ‘big banks’ and ‘big pharma.’

When preparing for a crisis one of the first obvious steps is to make sure you know what actually is a crisis for your organisation. The ones to particularly watch out for are the ones I describe as being ‘existential’ what I mean by that is a crisis that goes to the heart of your business model. It might be a fatal undermining of your brand promise i.e. what you say you do you actually don’t or, as in the case with Facebook, a fundamental challenge to how your business functions.

There is a saying we are all familiar with now that if something is free then you are the product. That is the case with Facebook. The service they provide linking us with our friends and family etc. comes at the price of helping advertisers and others better target us as prospective purchasers or even voters.

Consumers are becoming ever warier of the threat to their privacy and as a consequence social media platforms such as Facebook have been given notice by governments, regulators and their users. It will be interesting indeed to see how ‘big tech’ gets out of this one.  Mark Zuckerberg’s recent testimony to the US Congress was an interesting example of an ‘apologia’ i.e. a narrative as to how Facebook saw its crisis but it’s not one that many people have bought.

And my final crisis has led to the end of an era for a company I have followed closely.

Unilever, the Anglo-Dutch consumer goods conglomerate famous for brands ranging for PG Tips tea to Dove soap, parted company just days ago with Paul Polman, its CEO for the past 10 years.

Apart from the financial success Unilever has enjoyed under Mr Polman it has also sought to put good corporate citizenship at the heart of the business. Mr Polman set Unilever and himself challenging targets at the start of his reign: to double the size of the business while reducing its environmental footprint and increasing its positive social impact.

His many CSR initiatives such as schemes to bring fresh water and food where both are scarce has been praised by many. However, I fear what Mr Polman will be remembered for is a botched attempt to move Unilever’s HQ from the UK to the Netherlands.

The company has a complicated dual structure, but the UK had always been its home. There are a number of rumoured reasons as to why the change e.g. it is easier to fend off take-overs in the Netherlands and then, of course, there is Brexit, but whatever the reason the actual project appeared to alienate key stakeholders, most importantly shareholders.

Despite growing opposition, Mr Polman appeared to plough on with the move until finally as shareholders became ever more vociferous in their opposition the plan was abandoned. It was then only a matter of time before the change at the top. Sadly, there are numerous crises which have at their heart management hubris.

Despite ten years at the top Mr Polman leaves Unilever under a bit of a cloud. A self-inflicted crisis that if it did not actually directly lead to the loss of the CEO’s job (10 years is a creditable term in such a job) it certainly clouded an otherwise positive reputation for both executive and company.

So that’s my round up of an interesting year for crises.  However, since I began writing this piece we have had Dolce & Gabbana, about which I posted the other day, and now Marriott hotels admitting a hack involving 500 million customers’ personal and bank details.  There should be plenty to write about in the New Year.