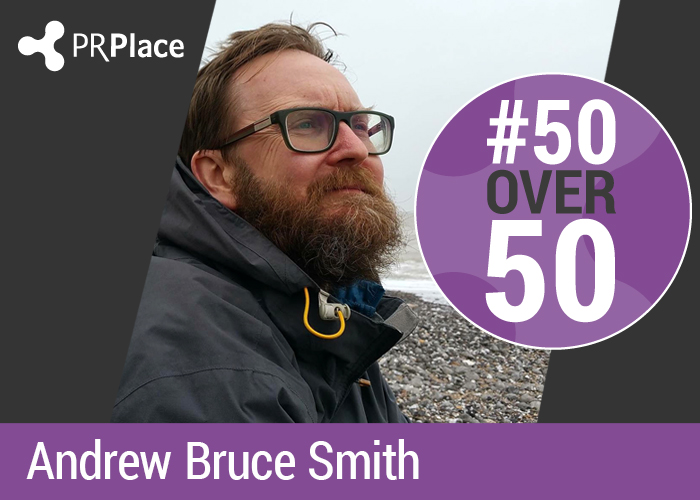 Who would have thought that growing up the son of newsagent in a remote part of Scotland would lead to a career in PR? But that’s exactly what happened for Andrew Bruce Smith who many will know as one of the Chartered Institute of Public Relations popular trainers in all things digital.

While studying philosophy and English Literature at the University of Edinburgh, Andrew worked on the student newspaper and got a taste for journalism.

“After I graduated, I must have sent off 100 job applications with no luck,” says Andrew. “The one for an editorial assistant post on the Retail Newsagent Tobacconist and Confectioner – or the ‘sweetie and fags weekly’ as it was affectionately known – was my last go. I got an interview and headed down to London with my portfolio but when I got there they said ‘forget that – your dad is a newsagent’. And I was in.”

Andrew was able to mingle with the great and good of Fleet Street. For example, when The Independent launched, Ray Snoddy at the FT called up asking Andrew to help him understand the retail aspect of the story. There was that newsagent background coming in handy again!

He also got his first introduction to PR. “When I started in journalism, I thought PR stood for proportional representation. But I soon worked out that PR people seemed to get paid more than me and it looked easy: write press releases and go out to lunch!”

However, his first PR task was more like The Apprentice, being sent out to buy 50 ice buckets for a PR promotion as cheaply as possible. “I did question if I had made the right decision but decided that if I was going to stay in PR it would be in a field that interested me. And that was tech.”

This was an exciting time for tech PR and his career took off. Andrew can claim to be only the second person in Britain to send a press release by email. It was 1990 and he was just beaten to the punch by Frank O’Mahoney, then UK PR manager for Apple. (Andrew was also one of the first people in the UK to join LinkedIn.)

It seems extraordinary to think now that Andrew told his boss in the late 1990s about a new search engine called Google after a tip off from Guardian journalist Jack Schofield. It’s really not that long ago! By now Andrew had worked as a director with leading tech PR firm Brodeur Worldwide for some years, but was ready to do his own thing in marketing communications.

It was after running his own small agency in the early 2000s that losing out in a pitch for business came as a “lightbulb” moment and and made Andrew realise the huge opportunities in SEO and digital channels. The potential client went with a digital agency instead, one of the first to talk about SEO and linking it to sales.

Andrew now trains with the CIPR and PRCA and shows people how to integrate social media and digital into their PR activity. He pretty much knows all there is to know in Google Analytics (GA) and has passed the GA Individual Qualification five times.

So, is all this social and SEO stuff a young person’s game or not? “What nonsense,” says Andrew. “There is an assumption that anything related to social media is only understood by someone under 30. It stands to reason that younger people may be more tactically savvy but they often lack organisational and business experience. The older practitioner has life and business experience. We need to bring the two together, taking the tactical understanding of digital and translating it into something strategic for the business.

“It doesn’t mean forgetting media relations either. Digital media coverage can be shared and is discovered through Google. It is also a big factor in SEO. Media coverage still has a massively important role.”

And what about sector experience? It was that knowledge of the news industry that got Andrew his first job. “I would say that you shouldn’t narrow your options, but if you are prepared to invest in understanding a sector it won’t do you any harm and can set you apart.”

He has been playing in rock bands since he was 14. He did music reviews while at Uni and once interviewed Mark Knopfler, who was a bit monosyllabic!

And as a summer job, Andrew was Rudolph Nureyev’s dressing room assistant during the 1984 Edinburgh Festival.