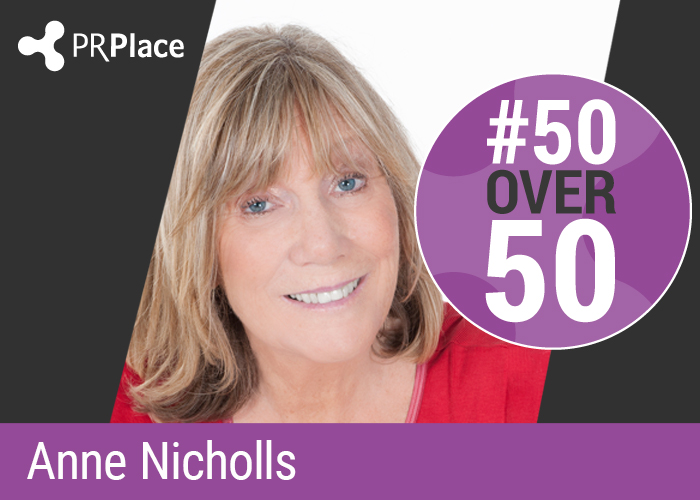 Nominated by Heather Yaxley, who writes: Anne Nicholls is a wonderful example of a ‘quiet’ PR practitioner, who had gained experience and respect in several specialist areas across the education, health and charity sectors. Committed to her own professional development, Anne has embraced new challenges by gaining qualifications in digital marketing, PR and public affairs. Her ‘can do’ attitude is infectious and I believe that Anne is a worthy addition to the #50over50 list.

It’s never too late for a career in PR and Anne Nicholls is proof of that. She took up her first role in PR at the age of 42 and hasn’t looked back.

Anne had spent 14 years in teaching after working for BBC Radio. She found herself teaching media and communications, but decided that she would rather do it than teach it.

She had set up a City and Guilds course for people who wanted a career in journalism, then began freelancing herself, writing features for women’s magazines and educational pieces for the national press. It was writing articles for City and Guilds that led to them offering her what was to be her first PR job.

Of course while Anne was starting out with lots of relevant experience, she had no professional qualifications or training. “I realised that I had to develop my skills and attended lots of short courses and networking events. I’ve kept it going ever since. I think it’s so important to invest in your own training and development. I’m passionate about lifelong learning.” Anne , who already holds the CIPR PR Diploma, has just completed the CIPR Specialist Diploma in Public Affairs with PR Academy. “It was tough, but learning how to apply the theory to practice has been really valuable.”

She is about to embark on a more flexible, portfolio career as a communications specialist in education, alongside writing and as a member of the CIPR Education and Skills Committee.

“I was never a writer as a child, but I have always devoured newspapers and had an urge to get into print myself,” she says. “That interest has served me well in my PR career too. You really need to understand the media, both old and new, that you are targeting – the sort of stories they carry and their style.”

She has already self-published a book based on her father’s war time diaries and another some years ago on public speaking. Her next project sounds brilliant – all about her life at boarding school in the 60s. “We were made to write letters homes every week and I still have them all,” says Anne. “Reading them now it’s like a cross between Adrian Mole and Bridget Jones! The idea is set it against the background of what was happening at the time.”

Being able to work flexibly is particularly valuable later in a career when there may be the need to support elderly relatives. Anne finds it invaluable to be able to spend the time she needs with her mum. She is also a great traveller with deserts seeming to be the theme. She has visited Syria three times, Lebanon twice and Egypt six times.

Finally, an interesting fact about Anne. While at university in Leeds she was in a drama group and got to tread the boards at the Garrick in central London when Leeds University won the Sunday Times student drama competition. “I only had a few lines, but being on that stage is something I’ll never forget” she explains.