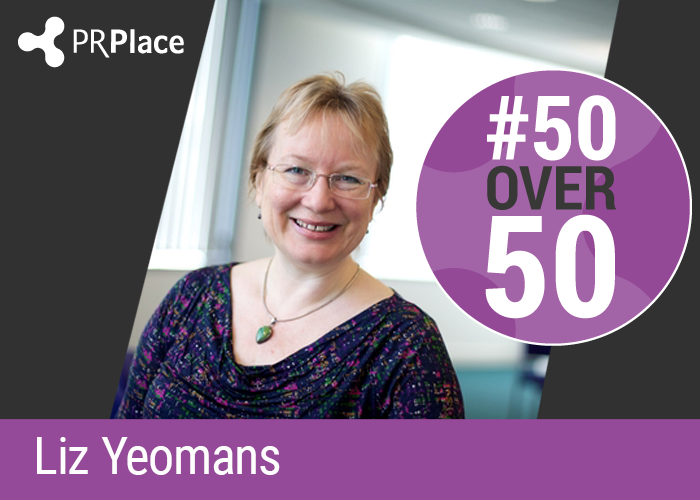 To many PR Academy PR alumni, the name Liz Yeomans is a familiar one. For many years Liz was the co-editor of the book Exploring Public Relations. We must have bought 100s of copies over the years. Still got yours? Tweet us a picture!

Liz is now in what she describes as the third phase of her career which has seen her working in practice, academia and now making time for things that interest her personally.

‘The question is, where can I take my experience and knowledge next’ she says. ‘I’m not sure just yet but I have some ideas.’

In fact, Liz has a really interesting project coming to fruition this autumn – her work on what she calls ‘emotional labour’ which has come out of her PhD research.

‘I wanted to focus on what PR practitioners do through their professional interactions, how they do it and why they do it’, explains Liz. ‘By emotional labour I mean the effort that goes into maintaining relationships with stakeholders like clients, journalists, media influencers and colleagues.

‘Not only do practitioners have to manage their own emotions, they have to manage those of others. It’s about the effort that goes into keeping people onside, it’s an incredibly difficult job and not everyone can do it, so it feeds into the debate we are seeing at the moment about mental health.’

The output – a research monograph – will be quite a theoretical book, but an important one in highlighting the pressures that practitioners can be under. It will be published as part of the series New Directions in PR and Communication research edited by Kevin Moloney.

Liz’s own experience in practice began in publishing, in magazines, then to the Government Information Service and next to become the first PR officer for education with Hampshire County Council in Winchester.

This is where Liz’s interest in internal communication began. This was a huge change project. ‘The council had to define its new role and we had to tell that story to our employees. I found this much more interesting than media relations. It was a real disruption of power because of course power follows the money.

‘People had to start thinking in a different way – the Thatcher project was about getting people to think in market terms. So, while the language we used had to change to reflect the changing role of the local authority, we had to be sensitive, remaining true to community values’.

Interestingly, the council recognised that for this change to work, it would need to be treated as a project and a specialist was brought in from IBM to embed project methodology.

Liz followed up this interest in internal communication and change by focussing on business process re-engineering in BT for her Masters which she did at the University of Stirling.

Her input to delivering this change was clearly very valued as when she moved north because of her husband’s work, Hampshire County Council continued to employ her enabling her to work remotely through pretty basic technology including a dial-up modem and fax machine – remember this was 1992!

‘We saw the move as an opportunity to have a new life away from the London and south east bubble and have time to do more things, other than work and commuting,’ says Liz.

When the Hampshire work came to an end, she was recruited into academia by Professor Anne Gregory. In the early days, it was pretty much all teaching, but her research interests began to grow – partly ignited by her Masters.

‘It was while I was doing the Masters that I said I wanted to write a good text book for the UK. One of the main texts at the time was by Cutlip, Center and Broom and I was frustrated that it was so US focussed. Not just the case studies, but cultural assumptions too.

‘I never thought at that time that I actually would, but our first edition of Exploring Public Relations came along in 2006 – we were surprised at how well it took off.’

At PR Academy, we always like to see a new edition because of the wonderful pictures on the cover – one edition was meerkats (who doesn’t love a meerkat?), another time it was dolphins. ‘We wanted to do something a bit different on the cover instead of loud hailers or abstract people pics’ explains Liz.

Heading into academia is a possible route for practitioners who want to change career while at the same time building on their experience and knowledge. So what advice would Liz give?

‘The big thing for me was getting a PhD, I wish I had done it sooner. It opens doors, people take you seriously. Also, if you have a doctorate, potentially you have a good bank of content to draw on for teaching, although it helps if your teaching is linked to your research.

‘I would say going into academia without a Masters, or maybe the CIPR PR Diploma, is a big leap. Do some part time teaching, I don’t mean guest lectures, but routine teaching through workshops or seminars which gets you reading and engaging with research.

Recently, Bournemouth University announced that it was closing its PR degree and merging it with marketing. So does Liz think PR as an academic discipline has a future?

‘I’m a bit biased – of course! I actually think that the theory has got richer, it has developed more. For example, I have a current PhD student developing theory about dialogue in PR which is under-researched. Where else would you develop that?

PR theory has come on leaps and bounds due to more people going into academia. There is still room for PR: if you start to call it marketing, the focus changes. PR and marketing have different origins. PR has to do with ideas about the public, the public sphere, rhetoric fundamental to understanding PR’s role in democratic societies, as well as a function of business.

My view is that PR should still be taught as a standalone subject, especially at Masters level. There has to be room to debate PR’s origins, purpose and ethics because it’s largely a persuasive discipline.