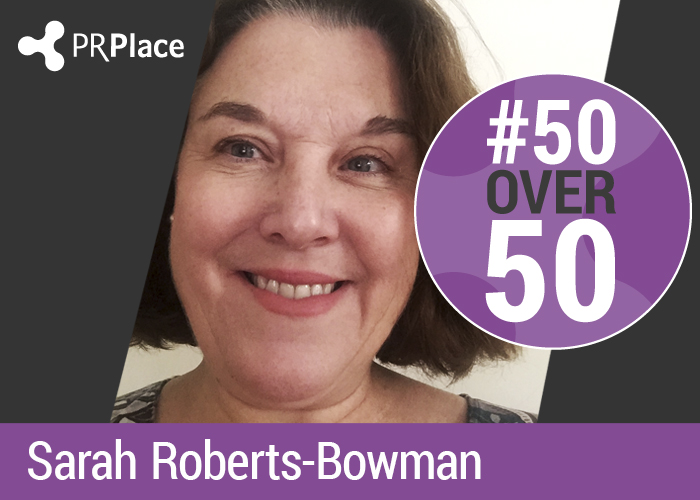 #50over50 is an occasional series designed to recognise people who have made a significant contribution to public relations practice and/or education.

Sarah Roberts-Bowman was nominated by Kevin Ruck, who writes:

Sarah and I first worked together in the early 1990s when she headed up the Corporate Communication team for BT’s London region. What struck me then was her energy and drive which was (and remains) incredible. Her results back in those days at BT were outstanding. Her approach was very strategic with a crystal clear focus on stakeholder mapping, prioritisation and relationship building. Our paths diverged in the late 1990s but we met again when she was a lecturer at LCC. Her commitment to the PR degrees there was incredible. There are no half-measures with Sarah. Everything is full-on and genuine. And stakeholders, clients and students are always put before any self-promotion.

Sarah Roberts-Bowman is at first reluctant to reflect upon her career in public relations on the sensible grounds that she hasn’t peaked yet.

But there are three strands to her career to date, and all have been shaped by her early experiences starting out as a parliamentary affairs executive at BT not long after graduating with a politics degree. That itself was not long after BT’s privatisation, when the public affairs function was new. (She later on learnt that she was offered that role ahead of someone who went on to a high profile front bench career in politics).

She emphasises the importance of connecting with people in any public affairs or public relations role – and this is a running theme throughout her career. ‘Policy is made by people, and has to be communicated to people.’

She studied for an MBA during her time with BT, and this validated her experience in a frontline role. ‘I learnt about the ways in which organisations relate to their wider environments, and models of stakeholder relationship management which I was able to apply to my day job.’

In a subsequent role at BT, working in regional comms, she implemented an approach to analysing stakeholder relationships based on a power-interest matrix. Colleagues in business development told her that this approach led to £50 million worth of business. ‘This validated that I did know what I was doing’, she says.

She was offered a role as head of public affairs for BT, but after ten years in the same organisation, decided to turn this down and move onto the second strand in her career.

As an independent consultant, she was able to take on project work for other FTSE companies, and to work in the not-for-profit sector, at one point heading comms for the Centrepoint homeless charity which had Prince William as patron. Once again, lobbying and issues were important as well as promotional work and fundraising.

‘I enjoyed having the freedom to take my skills to make a difference in other sectors,’ she says. This was also the time when she began her family, which would have been much more challenging in a full-time corporate role.

The common thread so far? ‘An instinctive curiosity about the world around us’, and this leads to the third stand in her career.

She had started accepting invitations to give guest lectures at several universities, and in 2009 made the leap to become a full-time lecturer (and part-time PhD student) at the University of the Arts, London.

The lessons she’d learnt as a parliamentary affairs executive apply to education.

‘The role of PR is to stimulate conversations, to get people talking over the fence. Technology may change, but good PR is still good PR.’

Reflecting on her academic career, she identifies a paradox. Good PR people are jackdaws, constantly seeking new ideas and making new connections. Yet successful scholars tend to mine the same seam, becoming subject experts in a narrow field.

Sarah’s latest move was out of London to the north east for family reasons, and she now has a role at Northumbria University where she’s not only supporting students, but is also making interdisciplinary connections with criminologists and sociologists.

Your nominations for #50over50

We’d welcome your nominations for our #50over50 series in order to widen the net for talent and experience. Broadly, we’re looking for people born before 1970, but age is less of a factor than experience. These should be people who have made a substantial contribution to public relations practice, education, or in developing teams around them. We’d need the name and a one paragraph statement of why you are nominating them. Please send them to us by email.