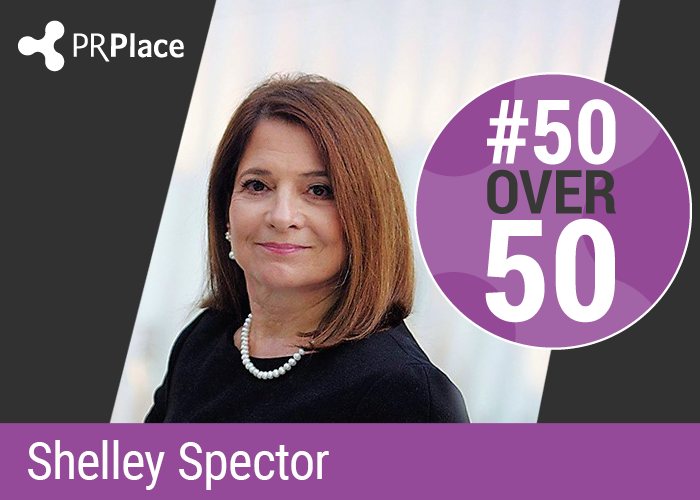 Shelley Spector runs the Museum of Public Relations in New York – did you know there was a PR museum? We didn’t, but talking to Shelley we realised how important it is that there is an organisation preserving the history of public relations and the part it has played in historical events. She is also a PR agency owner and author who recently edited and published the first book on diversity in PR, Diverse Voices: Profiles in Leadership.

She has been nominated for #50over50 by Adrian Crookes, who did his CIPR PR Diploma with PR Academy and now lectures at the London College of Communication.

Shelley got into PR from journalism. She was a Journalism Major at university in the US at the time of Watergate and it inspired her to want to be an investigative reporter.  She notes the similarities with what is happening in US politics at the moment: “I think kids today are being inspired in the same way because of what is going on with our administration at the moment.”

However, back then, PR wasn’t “a thing”. Shelley explains: “During my Journalism studies we only had one class in PR and it was terrible!  Now, I see PR majors coming to the Museum and it’s lovely to see how the subject has expanded.”

Shelley did lots of writing while at the University of Rhode Island. She was an editor for the campus newspaper and worked as a writer for the school’s  PR Department. “It was a time when you could write a feature, send to the newspapers in Rhode Island and get it printed – with a by-line!” How times have changed.

“I wanted to be a reporter but in the 70s, a recession hit and they were bad days in New York. So, instead I went into PR and realised how much I liked it. My understanding of news and journalism was a real advantage. Knowing what makes something newsworthy is extraordinarily important – as much so today as when I started out.  It helps that I was – and still am – a bit of a news junkie!”

In fact Shelley is so much of a news junkie, that she includes the trick of folding the New York Times so you can read it on the subway in her lectures!  Some may ask why bother when we are all reading the news on our smart phones…..  “It’s so important to read the print version, not just online. If you rely on the digital version you’ll miss so much,” says Shelley. “Only by reading the news can a PR practitioner understand how your clients fit into current events, and also see how to make news and how to be a good news writer.

“You’ll learn how to pitch a story, develop different angles for different editors and understand the difference between news, editorials and features.”

Shelley is a passionate advocate for those traditional PR, media relations skills. “We can’t just post it on Facebook!” she says.  “A recent study found that clients value “earned media” – i.e. media relations – as the most important. Kids today grow up knowing social media, but we have to get back to the basics.”

Having said that, Shelley knows the value of social media. Through Facebook, the museum has reached learners and practitioners across the world making knowledge much more accessible. Around 60% of followers are from underdeveloped countries.

So what do you put in a museum of PR? Students of PR and many practitioners will know of Edward Bernays and his Torches of Freedom campaign which encouraged women in the US to smoke. Well, the Museum has a collection of books from Bernays’ house. Some of those books were given to him by his uncle Sigmund Freud. There is Ivy Lee’s address book from 1928 and Arthur Page’s ashtray!

Shelley knew Bernays for the final ten years of his life. So what went on with the Torches of Freedom campaign? Would it be acceptable today? “You need to look at the historical context” says Shelley. “Women didn’t have the right to vote, buy a house – or go outside for a cigarette. So the campaign was part of female emancipation.”

PR has a hand in many historical events. The  Museum also has early examples of internal communication, including from Selfridges, which was doing employee communication back in the 1800s.

The museum is run on an entirely voluntary basis and is doing an amazing job of preserving PR history. If you are in New York do contact Shelley and arrange a visit. Donations – both financial and artefacts – are welcomed, of course.