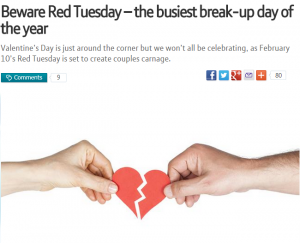 This is an article by Paula Keaveney.

This is apparently “Red Tuesday” the day on which we are more likely to split from our partners.

We’re told that the run up to Valentines day highlights the fact that we have fallen out of love and gives us that extra push to say goodbye.

Evidence based? Papers from the Grimsby Telegraph to the Western Morning News report that a survey of 3,000 people showed that 22 percent of them had at one time or another split up from a partner in the week running up to Feb 14.

A psychologist is on hand to provide quotes about why this happens, and website Illicit Encounters is there to highlight their boost in sign-ups around this time of the year.

If we were taking this seriously we might be asking about other factors. February is after all still cold and dark. It’s a long time from Christmas, even longer from the summer holidays. The debts of the winter break are well upon us by now. No wonder people are miserable. And there could be all sorts of mental health issues to discuss.

But we are not taking it seriously are we?

The survey was done by the website, of current subscribers. And Illicit Encounters is not a name that signals long term devotion!

So here we have another manufactured “news” peg which, like Blue Monday, will probably become a regular in news diaries year on year.

Now don’t get me wrong. I love a created PR story as much as the next person.

But I do wonder if we haven’t gone a bit too far.

The recipe for these “events” had become so formulaic that it is surely only time before they are rejected.

Take one slanted survey, add in an academic or expert for comment, sprinkle with local radio friendly lists and there you have it.

Maybe we should all give up these manufactured days for Lent. (Now there’s something that starts with a real “event day”)

Paula Keaveney is a Lecturer in Public Relations and Politics at Edge Hill University.