Large construction projects are complex and problematic. Just look at the negative narrative around HS2 before it’s even begun.

So how did Crossrail complete Europe’s largest construction project on time and under budget – and with a generally positive narrative around the engineering achievements and archaeology uncovered?

Crossrail’s Head of Learning Legacy (and former Head of Stakeholder Engagement) Simon Bennett has been involved since the beginning, and outlined its approach to stakeholder relationship management in a webinar that’s now available on YouTube.

The project took 16 years from initial planning to final completion. With the phased opening of the £14.8 billion Elizabeth Line in December 2018, this will be the largest single enhancement to London’s transport infrastructure since the Underground was first built, providing a 10 per cent increase in central London capacity.

The project had some advantages. People tend to accept development in central London and much of the line used existing routes. Opposition would be more intense with greenfield developments, as we’ve seen with HS2.

Stakeholders were identified through standard mapping procedures and were reviewed periodically through the project.

‘A major construction project will of course have some temporary – and maybe permanent – impact on communities…. It is very important to contact these communities at an early stage.’

Before construction began, the public was consulted over the choice of preferred route. This was preceded by a public awareness programme with advertising and leaflet distribution at stations. (‘Building awareness is difficult and takes time’.)

‘We established a helpdesk with a local call rate number and staff in-house to respond to calls and emails during the working day. We used an external company to answer phone calls outside that time; but not a call centre, rather a communications firm who had provided the same service for the Channel Tunnel rail link project. We also set up a stakeholder database so we could manage all enquiries, track progress in responding and keep a record of what had been said.’

Information was prepared for the consultation. ‘This was 2002-3 so much of it was printed, but a future project would do much more to deliver this online.’

The ‘Young Crossrail’ programme was designed to excite people who would be future passengers – and possible future Crossrail engineers.

‘We made sure to staff our events with the engineers and planners who were developing the scheme, briefing them beforehand to ensure they had the necessary skills and giving them advice on how to deal with consultee questions.’

‘During the parliamentary process, we focused our communication efforts on petitioners. The consultation team was moved to report to a head of government liaison and became the petition management team.’

‘Internal communications was deliberately not part of this organisation, but was instead in the Talent and Resources Directorate.’

The largest team within external affairs is community relations.

‘The aim of community relations activity is to establish and maintain an outstanding reputation with local authorities, neighbouring residents and businesses and other local stakeholders to enable the successful delivery of Crossrail.’

This was achieved by following a set of principles, first among them being ‘no surprises’.

‘If people have information on what is going to happen in their local area they are much less likely to complain.’

The next principle is ‘do the right thing.’ ‘We aim to put ourselves in the position of a member of the community who is being inconvenienced and do whatever practical to address their concerns.’

‘By being open and honest and by doing the right thing we build trust among and create advocates with the local communities.’

Contractors were obliged to provide community relations representatives as a first line of communication to local residents.

‘In key locations with large amounts of work we established community liaison panels which are independently chaired, usually by a local councillor or council officer. These were initially held quarterly and they give us the opportunity to give a more detailed update on the upcoming works. We try to ensure residents groups are represented but we keep the panels invitation-only to manage the numbers.’

The media team within external affairs is responsible for press and new media relationships. Producing news releases is a part of this, as was working with the producers of the Fifteen Billion Pound Railway documentary series shown on BBC television.

The public affairs team manages the relationship with politicians at all levels. ‘We needed to ensure that route MPs are kept up to date so that they know where to go if there are constituency enquiries. We organised visits for government ministers and arranged Crossrail appearances at committees at Westminster and the London Assembly.’ 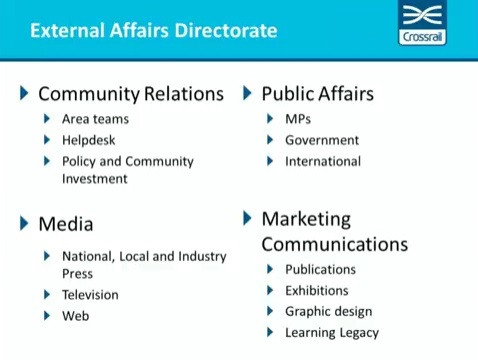 The external affairs strategy, established in 2014, is clear and simple: ‘The aim was to establish and maintain an outstanding reputation for the organisation.’

Progress towards the reputational aim was checked by data, with regular market research conducted by Ipsos/MORI.

‘We think our favourability rating is good for an organisation that is, of course, creating disruption.’

‘The best way to achieve favourability is to build familiarity. Clearly communication is extremely important in building the reputation of the organisation.’