Download our Guide to Storytelling for PR and Internal Communication.

We all tell stories. We use storytelling to shape events into memorable narratives (often involving moments of jeopardy, complete with heroes and villains).

Storytelling is fashionable as it engages emotions in a way that discredited ‘messages’ do not. Messages seem to belong to the previous one-way transmission model of communication They pay more attention to what the organisation wants to say than to what audiences are willing to hear.

Not everyone has a head for numbers and figures. But most of us can remember the shape of a story.

Ann Pilkington has prepared a new PR Place Guide to Storytelling, available free to registered members of this site. It introduces storytelling and, drawing on sources, covers the main types of story and step-by-step models to help shape your stories.

We learnt recently that Jeff Bezos has banned PowerPoint presentations within Amazon executive meetings. Instead, attendees read through a six-page narrative statement before discussing the problem and the proposed solution.

And yet. We say ‘don’t tell stories’ to our children. Stories are made up, and can be seen as fiction, not truth.

Public relations has a bad reputation when it comes to telling the truth. Most of us avoid telling lies (for one thing, we would be too easily called out for this), but our version of the truth is often just that – one version.

Yet even this practice, discredited when described as spin, sounds more respectable when seen as framing.

Just as we select what to include in an image – and what to exclude – we also choose what to emphasise. In other words, we select which story to tell with our images as well as with our words.

It’s said ‘the camera never lies’. Yet even photographs are open to interpretation.

Here’s a recent example widely reported in the media (report and images in The Sun). Seen from one perspective, Prince William was giving the finger to his audience outside the maternity wing. Only when viewed from another angle was he seen to be holding up three fingers, one for each of his children.

In this video, an entrepreneur tells a compelling story about the foundation of her business. Julie Deane of the Cambridge Satchel Company says:

‘I needed to make two sets of school fees and I had a great determination and a passion. It was me and my mum, in the kitchen, £600 budget, and that was four years ago. And now we have 70 employees, and a turnover that’s about £10m a year.’

In a few sentences, she tells a ‘rags to riches’ story, complete with a founding myth. In her case, it was the kitchen. How many Silicon Valley businesses emerged from garages or dorm rooms?

Download your free copy of the PR Place Guide to Storytelling using the form below.

The guide will help you to: 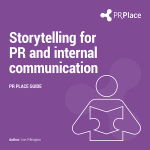 Thank you for downloading your free guide. Your download should start immediately.

We are adding new guides all the time, so check back regularly.