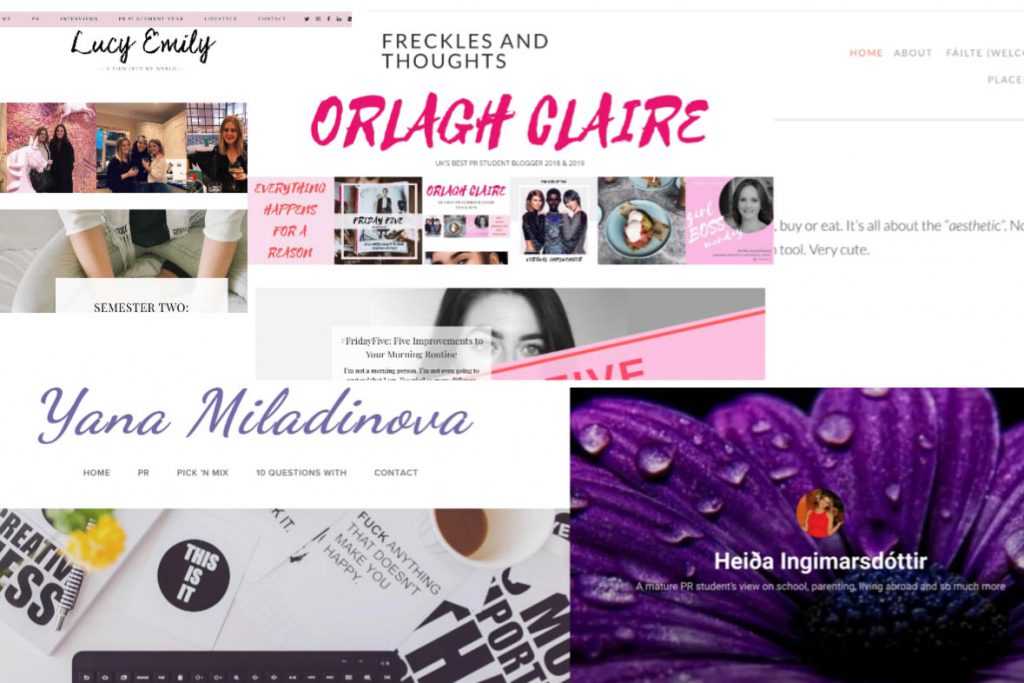 It was a strong contest from beginning to end. 253 blog posts from 73 students at 15 UK universities suggests it was much more than a two-horse race.

Orlagh and Lucy are currently in the final year of their BA degree courses. Of the top ten individuals, four are undergraduate students and six are postgraduates. They’re studying at universities in three nations of the United Kingdom (only Scotland is missing). One is Bulgarian and another Icelandic. All are female.

Men scarcely featured this year. It’s true that public relations courses attract many more women than men, and it’s also true that the blogosphere (ugly word) largely thrives today in female-dominated consumer niches. But I don’t want men to feel excluded: they should look to Marcel Klebba, shortlisted in this competition in 2017 who won a national blogging award a year later and who now leads #CommsSchool with his boss Stephen Waddington.

I’m also conscious that not all university lecturers approve of a contest conducted in public that rewards exceptional individuals but has little to offer the rest of their classmates. I’m even aware of backchat this year from some student bloggers who felt the potential rewards were insufficient compensation for their efforts.

I’m undaunted. By highlighting quality posts and exceptional individuals, I’m helping recruiters identify talent. I also hope to inspire other students to aim high. Where else should they be aiming, especially since university fees are so high and there are so many courses available to students to choose?

Blogging is so simple – at a technical level no more complicated than sending an email – that the success of our top bloggers can seem effortless. I know how hard it is, and I also know why I’ve consistently singled out the top five.

To run a successful blog requires these three things:

In my opinion, these three qualities are a better approximation of the requirements of a junior role in public relations or digital marketing than academic essays or dissertations.

Above all, blogging teaches you that success comes from hard work. The overlapping worlds of celebrity and influencers may give the impression that fame and fortune are easily achieved. Yet those posed pictures of a Bali sunset come as a result of hard work and preparation.

Our top bloggers not only show exceptional skills in creativity, content and connectedness, but they show the commitment to make it happen over a longer period of time.

Here’s what I especially admire about our top five bloggers.

Orlagh Shanks: She’s driven. A blog that was already accomplished when she was a second year student changed gear during her placement year in London. In this last year, she’s maintained consistently high standards, with a content schedule of three quality posts a week. When she was ‘living the dream’ in London, attending launches and events, even when talking about boy band members, I found her conversational writing style highly readable. Now, she’s emerged as an expert in influencer relations: Stephen Davies and Scott Guthrie are ahead on experience, but Orlagh belongs in the same room as them, and there’s much she could teach me. On more than one occasion, she’s been promoted from the student blogging list to appear alongside the industry’s leading voices in #ThisWeekinPR. That’s where she now belongs.

Lucy Hayball: She, too, is a winner. She was our Best PR Student blogger when a second year student in 2017. Like Orlagh, she experienced the glamour of working in fashion PR in London before returning to university for final year. This year her posts have been consistently well crafted, mixing reflection on her studies and career ambitions with interviews with graduates who are now practitioners. I suspect there may be a streak of perfectionism in her, because I’ve never spotted a single lapse in spelling, grammar or punctuation on her blog. That sounds like faint praise, but I read a lot of student blogs, and this level of writing is not the norm; it’s exceptional.

Niamh Murray: She’s different. Where others blog about careers and about work experience, Niamh is the master of the outspoken opinion piece. If these were just rants, they’d become tiresome, but they’re written with such individuality, such voice, that they’re often literary. (Either that, or they’re auditions for a role in the third series of Derry Girls – she keeps me guessing.) Take this example. She’s venting about rapper Azealia Banks insulting Irish women by calling them ‘ugly’. Niamh’s response: ‘This is obviously untrue, I mean, have you seen me? My ma says I’m gorgeous.’

Heiða Ingimarsdóttir: She’s also very distinctive. Rather than a conventional PR student blog, this is really an exercise in life writing. In a series of long, confessional posts, she tells how she overcame adversity in her early years to achieve an education, to travel and become a mother. One of the many things it’s hard to teach on a university course is resilience. She’s learned the big lessons the hard way and has emerged as a rounded human being. Her story deserves to find a publisher: it’s full of shocking details and is told without bitterness.

Yana Miladinova: She’s a connector. Yana is also writing in a foreign language, and she does so effectively and fluently. But I sense there’s more to her than this: she exemplifies what I mean by connectedness. We often forget that at the heart of public relations is the concept of relationships; Yana is someone who makes things happen and is someone other people seem to respond positively to. That’s also something that’s hard to teach, but important to learn. A generation that’s grown up with social media has lessons to learn in getting out there and meeting people. Recently, Yana has been presenting her dissertation research at academic conferences.

The rest of our top ten deserve a mention too: they’re all remarkable, and some forced their way in having only started their PR blogs this calendar year. Congratulations to Beth Smith, Holly Rees, Lottie Wiltshire, Ceri Jones and Megan Tidbury.