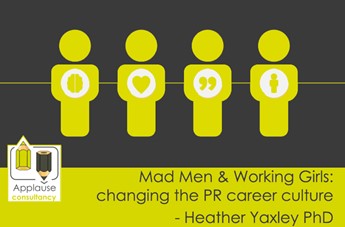 In this article, Dr Heather Yaxley looks at the folk theory of career progression that she terms ‘Mad Men & Working Girls’. She explains how it influences the PR career culture and why a different approach will help improve equity of opportunity.

There’s a set of beliefs about careers in public relations that are viewed as self-evident and true – even when they don’t stand up to examination.

A folk theory reflects everyday thinking and common beliefs. In respect of career progression, an enduring belief is that success is measured in upward movement. This is embedded in the metaphor of a career ladder, where people attain increasingly higher levels of roles within a formal organisational or occupational structure.

For the Mad Men & Working Girls of the 20th century, the career climb literally involved moving up, floor by floor, in sky-scraping office buildings. Senior executives were allocated the most expensive real estate – large offices, deep pile carpets, supersized desks and amazing views. This vertical location matched their place at the top of the company organogram.

Moreover, there’s a belief that hierarchical positions are earned by individuals who have the ‘right’ attitude – often defined as an innate personality characteristic. Typically, this is equated to working hard, being competitive and other behavioural traits. Personality is matched to suitability for particular career roles – and the idea that leaders are born and not made.

With this narrow portrait of successful career progression, there are a limited number of seats at the top table – and only certain types people who can fill these. This thinking is found in stereotypes that are predominantly masculine in nature. Hence the 1950s’ sharp-suited Mad Men image, and its echo, the 1980s’ power-suited Working Girl.

There is a paradox in the Mad Men & Working Girls folk theory of career progression. Equating success with a singular career direction and beliefs about a particular type of aptitude and drive, ignores the cultural context within which career opportunities are constructed to favour certain individuals.

This cultural context affects how people experience careers within an occupation. For instance, there is a disconnect between most initiatives to improve D&I and on-going emphasis on seniority. Equity of opportunity involves more than claiming that ‘top jobs’ are open to everyone, especially while the career culture predominantly supports a select few.

One reason why the Mad Men & Working Girls folk theory is problematic for public relations practice is that, at best, it describes the career experiences of a minority, not the majority of practitioners. To put it another way, it promotes a PR career culture of winners and losers.

The Mad Men & Working Girls folk theory portrays career progression as a contest. Organisations compete to attract and select ‘winners’ who over time comprise an increasingly reduced group of individuals. By virtue of their success these people are believed to be exceptional. This may not be the case as a ‘tournament’ career culture bestows unequal benefits.

A fast-track trajectory up the promotional pyramid provides a competitive advantage. A new role with a higher status in an organisation, is likely to lead to an enhanced profile, more challenging assignments, and investment in career development opportunities. This further differentiates ‘winners’ from ‘losers’ – although at some point, advancement up the career ladder will plateau as the promotional pyramid narrows.

The influence of this Mad Men & Working Girls folk theory on the PR career culture is evident in how successful careers are portrayed by recruiters, employers, professional bodies, industry publications and academics.

For instance, there is a dominant belief is that public relations can only be valued a strategic management function and that practitioners should aspire to achieve leadership roles. Tactical execution is viewed as a junior role and younger recruits into the industry are expected to work their way ‘up’ by gaining practical experience and on-the-job-learning.

Whilst graduates from PR/communication degrees are expected to be ‘oven-ready’ for employment, the face competition from those without any prior knowledge but who have the ‘right’ personality. They are led to believe that career advancement is based on merit and are ill-prepared for a career culture that results in a high level of churn.

There is an argument that ‘talent’ is in short supply, but investment by employers in qualifications and CPD is often lacking. At the same time, those with backgrounds in journalism and marketing may be appointed to more ‘senior’ positions.

The Mad Men & Working Girls folk theory of career progression is dated, dysfunctional and irrelevant for the contemporary workplace which offers a variety of opportunities beyond hierarchical progression in an organisation or occupation.

Modern careers have been called ‘squiggly’. This reflects two concepts:

Careers in public relations should be understood as multi-dimensional. They require individuals and organisations to make choices – and address constraints – by adapting continuously to a career context that is dynamic and unpredictable.

Beliefs about careers in public relations need to acknowledge the liquidity that is found when examining 21st century workplaces.

Undoubtedly 2021 will bring even more challenges and opportunities than has been the case in 2020. Home/distance working is accelerating a trend towards flatter organisational structures – which will mean even fewer hierarchical career moves.

At the same time, new forms of working can present career development uncertainty as well as practical difficulties.

We can anticipate continued growth of entrepreneurship (eg agency start-ups) and flexibility from freelance working and independent practitioners. This may be the result of choice or necessity.

All of these changes (and more) will affect what we think, feel, say and do in developing careers – and making sense of what success means. This will be the focus my next article.

See also my previous articles where I have explored new ways of approaching career development: