Misinformation and the climate crisis

Teela Clayton is a practitioner and researcher who is a member of the PRCA's Strategy Group on Climate Misinformation. 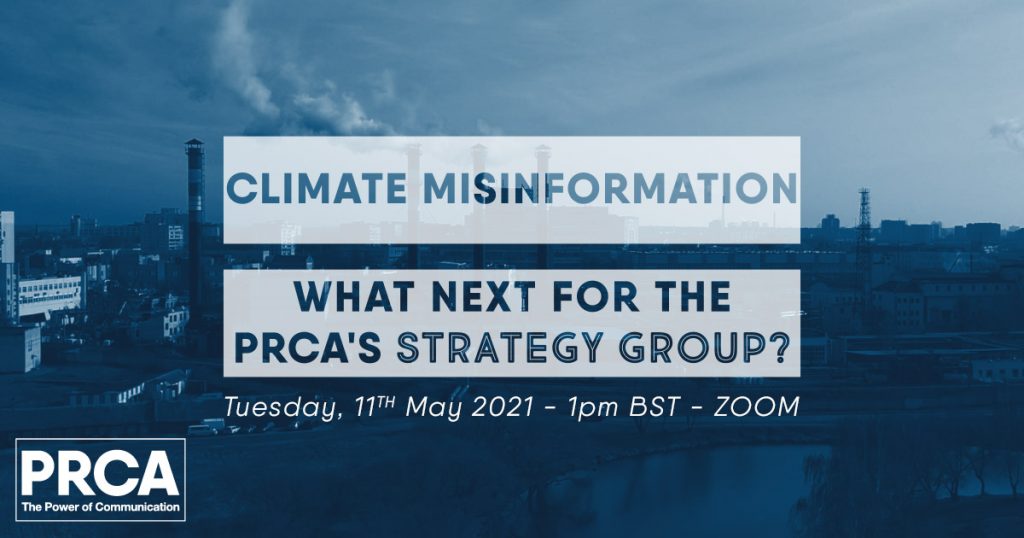 What more should the PR and communication industry be doing to tackle the deluge of misinformation about the climate crisis?

A dedicated PRCA strategy group has surveyed the public and PR professionals to measure the current perception of the climate crisis and misinformation, the role of communications professionals within it and the challenges that need to be addressed. Teela Clayton reports on the initial webinar delivered by the group.

Climate change has loomed large in the public consciousness for decades now, with crisis terminology entering our vernacular from the early 2000s. More recently, the global emergency – in an epoch defined by its crises, not least Covid-19 – has become synonymous with Greta Thunberg and Gen Z issues. But it is a crisis for us all to tackle. As UN Secretary-General António Guterres pointed out in September, “the climate emergency is a race we are losing, but it is a race we can win”.

So what more should the PR industry be doing about the climate crisis?

It’s a question John Brown posed to our PRCA working group – comprising Koray Camgoz, Laura Sutherland, Si Francis, David Gallagher and me – several months ago as we embarked on our research, surveying both professionals in the industry and consumers.

71% of comms professionals agree they are giving advice on the climate crisis more frequently than five years ago.

As communicators, we have a huge role to play in winning the race, not least because we often act as the gatekeepers between knowledge and publics. Our content and the way we communicate can shape public perception, and crucially, public behaviour.

But in an infodemic era with a proliferation of information, we must approach data cautiously, with a critical eye to build on and develop our knowledge. Over half of respondents of our survey (60%) felt that their clients had more of a propensity for token gestures rather than any real action towards climate change, and respondents were reluctant for those organisations to even be involved in the debate without being experts.

According to our Opinium survey, it’s estimated 21.8 million UK adults have been misinformed about the climate crisis on social media in the past month. The World Economic Forum (WEF) listed online misinformation as one of the top ten global trends threatening the world.

The ‘net zero claims’ and ‘sustainability communications’ jargon may also be contributing to the spread of misinformation. Cook et al in ‘Deconstructing Climate Misinformation’ say: “When people lack the expertise and skill to evaluate the science behind a claim, they typically rely on heuristics such as substituting judgement about something complex (i.e. climate science) with judgement about something simple (i.e. the character of people who speak about climate science) and are therefore vulnerable to misleading information.”

As Covid-19 studies have highlighted, fear can help drive behaviour, but trust in science upon fear levels may have been muted or polarised, further impacting the potential for action.

Large corporations have contributed to the noise with lobbying campaigns, and with global liberal solutions built into many of the climate agreements, the crisis is inextricably linked with politics.

Perhaps, then, no surprise that the questions posed at our first webinar concerned both misinformation and politics. As one of our attendees noted: “misinformation itself is not understood in a consistent way.” Indeed as we found in our consumer study, when asked to describe what misinformation is from a list, only 45% were able to accurately define it, reiterating the need for a clear definition. Another attendee asked about the connections between misinformation, purpose washing and malpractice, highlighting the need for citizens to be taught the resilience of how to recognise and discern misinformation.

Though we’re under no illusions that we’ll solve misinformation, now that we have our survey data, we have a starting point for how to start to tackle it and with 80% of those surveyed already playing an active role in advising the organisations they work for on how to navigate the climate crisis debate, our website will champion the best practice in the industry as well as providing help and guidance. We are collaborating with lots of experts, including the Met Office and recognise that this is transcendent of any political affiliations. As Michael Collins, PRCA, puts it: “It’s popular to corner misinformation as a right [wing] issue. But as the pandemic has shown, misinformation is very much prevalent on both sides of the political spectrum.”

We maintain a calendar of events for those working in or studying public relations and communication, and always welcome news from events organisers.

Also, if you’d like to write a review of an event you’re attending, then we’d like to hear from you. editor@prplace.com