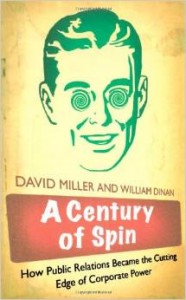 Commentators are sharply divided in their assessment of the achievements of Ivy Lee.

To some he was a pioneer who did more than anyone else to introduce the concept of in-house journalists, or ‘public relations officers’, to allow organisations to tell their own story fully and truthfully rather than to rely on biased publicity handouts.

To others he was a model of the new powerful breed of spin doctors who were prepared to work for anyone and do anything to protect the vested interests of their powerful clients.

A Century of SpinSociologists and critical theorists David Miller and William Dinan fall clearly into the sceptical camp and they detail, amongst others, two very serious accusations against Lee, one involving the massacre of striking miners and their families and the other involving collaboration with the Nazis (Miller and Dinan, 2008).

The first of these accusations concerned Lee’s role in the public relations battle that took place during a very hard fought coal miner’s strike in Colorado in 1913 and 1914, which ultimately led to him being dubbed ‘Poison Ivy’ by his detractors.

Lee was at the time working for the great industrialist John D. Rockefeller, whose family owned several of the affected coal mines in Colorado and he was asked to help in the public relations battle against the union involved, the United Mine Workers of America.

The strike was a particularly prolonged and very bloody affair, lasting some 14 months in total and resulting in the deaths of dozens of the participants on both sides.

The bloodiest event of the strike took place on 20 April 1914 in the small town of Ludlow, Colorado and came to be known as the ‘Ludlow Massacre’.

On that tragic day a fierce battle took place over many hours between the Colorado National Guard, who had been brought in to control the situation, and miners from the union at the site of a 1,200 strong tent colony just outside the town of Ludlow.

This encampment had been set up to house the miners and some of their families during the many weeks that the strike lasted. Whilst the battle was raging outside, the wives and children of the miners hid inside their tents in order to try to gain some protection from the fight.

Tragically, during the course of the battle one of these tents caught fire, with a large group of family members trapped inside. Many of them were seriously injured and a number of family members, including 12 children, were burnt to death. In total 19 miners and their families perished on that fateful day, along with a National Guardsman (Norwood, 2002).

According to Miller and Dinan, Lee wrote a publicity leaflet for Rockefeller in the wake of the Ludlow Massacre claiming that the deaths were the fault of agitators paid for by the United Mine Workers of America.

Rather than being a truthful and accurate account of events, as Lee maintained, Miller and Dinan claim that this leaflet was a piece of crude propaganda put out on behalf of his employer to attempt to lay the blame for the deaths at the feet of the union, rather than accept that they had resulted from the battle between the strikers and the Colorado National Guard (Miller and Dinan, 2008).

Not surprisingly, the events surrounding the Ludlow Massacre, including the attempt to shift the blame onto the union, raised the temperature of the situation even more and were followed by ten days of armed conflict between the miners and the National Guard. This reportedly resulted in at least another 50 deaths and the fighting was only stopped when Federal troops were ordered into Colorado by President Woodrow Wilson to regain control (Norwood, 2002).

Lee himself disputed this version of events when he was called to give evidence before the US Commission on Industrial Relations on the subject, claiming that he stuck entirely to his principles of advising his client to tell the full and frank story. He also claimed that both he and Rockefeller had been misled by mine managers who only told them what they thought they wanted to hear (Cutlip, 1994).

This is controversial enough, but worse was to follow. The second principal accusation against Ivy Lee is based on the well-documented fact that Lee acted as an unpaid public relations adviser to Nazi Germany in the early 1930s.

Miller and Dinan cite sources that record a meeting between Ivy Lee and both Adolf Hitler and German Foreign Minister Herman Goebbels during a visit to a German business client in 1934. According to the reports Lee was introduced to the Nazi ministers by Dr Max Illgner, the Managing Director of I.G. Farben, whose company he was advising at the time (Hiebert, 1966).

Lee reportedly advised Goebbels to cease propaganda efforts in the United States and urged him to meet personally with foreign diplomats and press in an effort to establish better relations with them. According to the US Ambassador to Berlin at the time, William Dodd, Goebbels followed that advice to the letter in the course of a conciliatory speech to foreign diplomats and press less than a month later (Hiebert, 1966).

Ivy Lee’s contacts with the Nazis did not go unnoticed back home in the United States where there was growing concern at the developing events in Germany.

Later that same year Lee was called before the House of Representatives Un-American Activities Committee to explain his relations with the Nazis. Lee defended himself by saying that he had not engaged in any propaganda in the US.

However, he did concede that he had given public relations advice to the Nazis and had briefed US journalists in Berlin on their behalf.

Lee’s reputation, and perhaps his state of mind, was badly affected by his appearance before the Committee and he died shortly afterwards, in November 1934 (Miller and Dinan, 2008).

It was the widespread use that the Nazi government made of wartime publicity material, particularly its anti-Semitic films, which did much to endow the previously neutral term ‘propaganda’ with the entirely negative meaning it carries today.

It is also well-documented that the German Foreign Minister at the time, the notorious propagandist Herman Goebbels, was a keen student of the theories of Edward Bernays on the subject of manipulating public opinion. This historical cross-over between public relations and the birth of the modern concept of propaganda has undoubtedly contributed significantly to questions raised by some over the ethical position of public relations even today (Miller and Dinan, 2008).

As with many of the historical figures associated with public relations, the impact of the career and contribution of Ivy Lee is a contested one.

The issues he handled on behalf of his mostly corporate clients were controversial ones. It would be a surprise if all sides in these battles for public opinion agreed on the merits of what he did. As with Barnum before him, Lee did claim for himself a position of some ethical principle, for Lee it was the advice to his clients to tell the full and frank truth and let the facts speak for themselves.

Whether in the heat of battle Lee was able to live up to this high aspiration is a matter for history to decide.

Ray Hiebert – Courtier to the Crowd: The Story of Ivy Lee and the Development of Public Relations – Iowa State University Press (1966)