PR is wrapped up in paradox 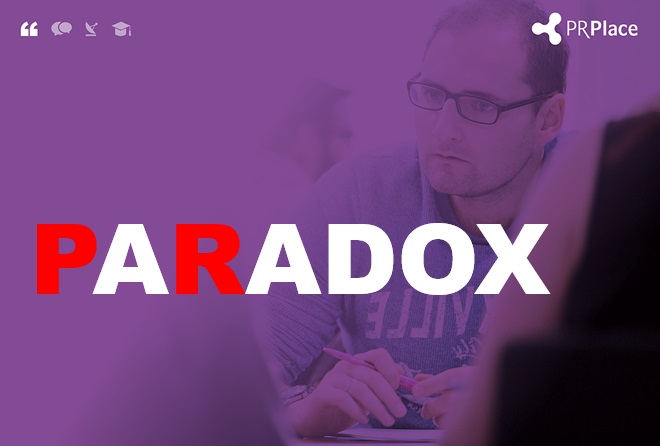 Paradox: ‘A seemingly absurd or contradictory statement or proposition which when investigated may prove to be well founded or true.’ Oxford Dictionaries

Let’s try some paradoxes that have been preoccupying me as an educator.

Is public relations the hardest of all easy jobs?

Everyone communicates, so how hard can it be? Employees are a captive audience, just get the management message to them. Our latest news is really interesting. Get it on the front pages!

Of course it’s easy… in theory. The challenges are all in practice.

It’s because everyone communicates that the job’s become harder in the past two decades. Imagine if every email went public. Imagine if every conversation was overheard. (We call our discipline public relations, but shudder at the thought of all of this taking place in public.) Coordinating all this communication is a complex matter (don’t even try to control it!). Then there are the conversations you certainly don’t control: the ones that take place behind your back. Some of these are public too. Are you aware of them, and what are you going to do about them?

The response to this paradox is to keep a sense of perspective. We start out thinking we’re the centre of the world: it’s all about ‘me, me, me.’ As adults, we gain a sense of perspective and realise that other people have agency too: they have their own thoughts, their own problems and concerns, their own interests and attention spans. Shouting louder is rarely the best way to enter a conversation.

And yet, organisations are rarely as grown-up as individuals. They still assume that their interests and their news is somehow more important than everyone else’s.

The educator’s paradox is how to teach a subject that’s deceptively simple. How soon to allow messiness and complexity to intrude into the pretence that the world can be explained by simple models and memorable theories? Too simple, and it’s an inadequate preparation for life. Too messy, and the learner becomes disheartened.

But the short answer to my question is ‘no’. Public relations is far from being the hardest easy job. Being a celebrity, even being a social media influencer – these are much harder ‘easy’ jobs. Why? Because high rewards involve high risks. In other words, there’s a much higher failure rate.

In a world where Google knows so many answers, creativity is knowing which questions to ask.

This is another way to look at the familiar paradox that we’re drowning in data but lacking in insight.

Google is free to use. So is Wikipedia (though it’s a not-for-profit site that needs your donations). So what price can you put on knowledge? How much of your time and student debt is well spent acquiring knowledge?

Education must serve some purpose other than the acquisition of knowledge if it’s to be fit-for-purpose and future-proof.

Information is one thing machines will always manage better than humans. So we need to find a place where we’re a move or two ahead of the bots.

My favourite quotation of the year came from the AMEC conference in Barcelona: ‘Research is a backward-looking probability to inform a forward-looking possibility.’

Public relations is rarely about what happened yesterday. It’s about what’s likely to happen tomorrow, and how our actions (or inactions) might affect future events.

We’re in the business of predictions. But are we any better than palm readers (Robert Cialdini provides a brilliant psychological insight into why they’re more right than wrong) or astrologers? The ‘what if’ calculations can be complex, but a human ability to gain insight from data (learning), empathy, creativity and experience are still better than computer alogorithms. It’s a quality the European Communication Monitor researchers call ‘solidity’.

But how to teach it? And how to assess students who arrive at university thinking that acquiring knowledge is important in itself?

Ideas are at the heart of PR, yet practitioners are anti-intellectual.

Long before there was any talk of professionalism, public relations was a trade. PR people were first and foremost practical problem-solvers, judged on their craft skills. Historically, many came from journalism and shared the same passion for telling compelling stories. They could hammer words into a well-forged story, but saw no need to have studied English Literature.

Only later was public relations taught at university; only then did we gain the publications that attempted to fit theories around the practice. While there was some obligation on academics to reflect on practice, there was no obligation on practitioners to be aware of theory. The world did not stop turning for lack of an academic explanation of the phenomenon.

This has been slowly changing with the professional project. There is a thirst for qualifications and for professional development among many – but it’s not universal, nor is it widely spread. There’s still surprisingly little cross-fertilisation of ideas between industry and academia.

That was our starting point for PR Place, to try to bridge the academic and practitioner worlds and allow a greater exchange of ideas. It’s a work in progress.

I can anticipate a future involving more work, but fewer jobs.

I know of one graduate who left a top job with a global technology firm to become a social media influencer. But at least this person once held a job.

I know of others who’ve gone straight from university to working for themselves or setting up their own businesses. They may never be an employee, though they will still have to find work to pay the bills and save for a pension.

So my paradox is explained by more flexible labour markets and near-universal wifi connectivity.

It sounds futuristic, but we’ve been here before. Pre-industrial economies are plagued by underemployment and its flipside, that people simultaneously hold multiple roles to make a living (subsistance farmer, labourer, craftsperson).

Now, in a post-industrial economy we’re more likely to be offering services than labour. (One academic has dismissively grouped these post-industrial jobs together and described them as ‘bullshit jobs‘.)

There are obvious upsides: individuals have greater autonomy and earning capacity. There are obvious downsides: many will miss the structure and camaraderie of a workplace, and there are issues around pensions, the minimum wage, holiday pay and so on. Trades unions do not welcome this world.

There’s probably a middle ground in our industry between the rigidity of the workplace and the isolation of freelance life. We need ways for people with different skills and experience to come together to work on projects; we need ways for individuals to feel a part of a group.

For this reason, there’s a preference among many thinkers and observers to spell out ‘public relations’ (and avoid PR). Jordi Xifra made this point forcefully in Experiencing Public Relations. We share this sentiment in principle, though make exceptions for the case of brevity in titles and on social media (that’s why we’re PR Place, not Public Relations Place).

We’re aware that many others will conclude that public relations is the problem, and choose ‘communication’, or ‘reputation management’ or some variant of marketing instead. It’s an ongoing discussion, and one that all practitioners, industry bodies and academics share. How to describe their departments or consultancies? What to call their degree courses? What to call their books?

It’s much more than the PR 101 debate about definitions (though we can offer you some help with that). It’s about purpose. It’s about distinctiveness. It’s about the future.