Research: Proving the value of PR

How Can We Prove The Value Of PR For Agency-Led Campaigns?

In this summary of her dissertation, Liverpool John Moores graduate Jessica Pardoe explores the problem of proving return on investment (ROI) of public relations.

It’s been over a year since I handed in my dissertation and waved goodbye to my academic life. Three tough-but-brilliant years of studying the practice of public relations all boiled down to producing an epic dissertation. I’d been ready for it since first year, and I wanted to give the project my all.

After completing a number of PR internships during my summer breaks and reading weeks, I’d already identified a problem within our industry that I wanted to research, and when completing my literature review I confirmed that this was a topic worth investigating and writing about.

That topic was ‘how can we measure the value of agency-led PR work?’

I didn’t know how to tackle my dissertation at first, all I knew was that I wanted it to be worthwhile. For me, it wasn’t ticking a box and getting a mark. It was creating something that would be of actual benefit to those both studying and working in the public relations industry. Therefore, it was with great honour that I accepted the editor’s invitation to write up a summary of my major project.

My dissertation achieved a first-grade mark at university, but I (regrettably) never developed it into an academic publication (maybe one day, eh). Therefore, it is with immense pleasure that I can share at least parts of it with you now.

So here’s the overview of my study. Condensing 11,000 words to 1000 (give or take) has proved perhaps even more difficult than actually writing the dissertation itself. Nevertheless, I’ve given it a good go, and I hope you can find some interest or value in the product of three years worth of hard work.

Introduction – The Struggle Of Calculating PR’s Return On Investment

There’s no doubt that there’s tremendous value in public relations; many would argue that it’s the backbone of all businesses. Bill Gates even once said, “if I was down to my last dollar, I’d spend it on public relations.”

That being said, there are also some (typically those dubious about investing money into public relations) who would ask how you can prove that there’s any value in the practice at all. Robin Tracey argued that good PR should be invisible, but if what we do isn’t supposed to be seen, how can we ever prove that it has any weight at all?

It’s true that many don’t like to invest money without knowing what their Return On Investment will be, but it’s also true that many PR professionals find it difficult to illustrate the value and the effect that their efforts have returned. Clients want numbers, yet all we typically tend to care about are the results. Trying to find a balance between the two saw the dreaded AVE come into play, that almost all PR’s that I spoke to during my dissertation research are now working hard to toss to the backburner.

If you aren’t familiar with AVE, it stands for Advertising Value Equivalent and it aims to compare the physical results of PR with how much the exposure and coverage would have cost you in advertising fees. When completing my preliminary research, and whilst doing my literature review, I found that wherever ROI for PR was mentioned, so was AVE. And it was seldom followed by praise or support.

Issue – How Can We Find A Happy Medium In Illustrating ROI For PR Campaigns?

After studying pretty much all the literature there was on the matter, I’d found my ‘gap in the research’ that I’d been searching for.

There was plenty of academic material to discredit the current ways in which Return On Investment for PR campaigns is measured – such as AVE, along with other quantitative and qualitative methods such as Perceived Value – but few recommendations as to what can be used in their place.

We recognise the problem: that clients want to see numbers, they want to know that their money is well spent. But we lack a solution: how do we demonstrate the value in what we do without hard figures that example results?

Research – What Do PR Professionals Have To Say?

Knowing there was an issue, and determined to at least make a step towards solving it, I decided the best way to work my way around this was to speak to working PR professionals. I did this through in-depth questionnaires, of which I got many results, and through two longer interviews with working practitioners: a PR consultant and an Account Manager.

Here’s a summary (and it is only a summary, as I fear I’d be writing near tens of thousands of words again if I was to recount everything I learned from my interviewees and questionnaire respondents) of what I found: 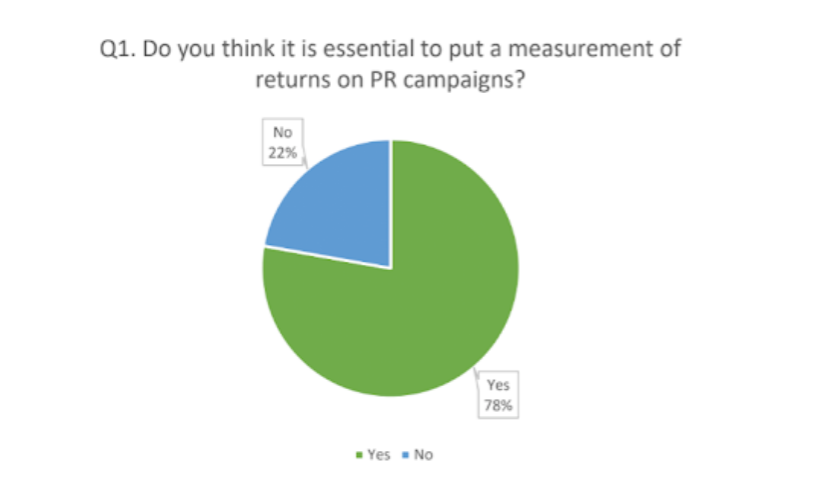 Despite the disdain around the methods that are currently in use. PR practitioners (78%) would largely say it’s essential to measure the ROI of PR campaigns.

The most common way that PR professionals have found to report their successes is through presenting coverage achieved, through using AVE (despite literature discrediting its value) and through utilising more digitally-focused metrics such as web traffic and conversions. 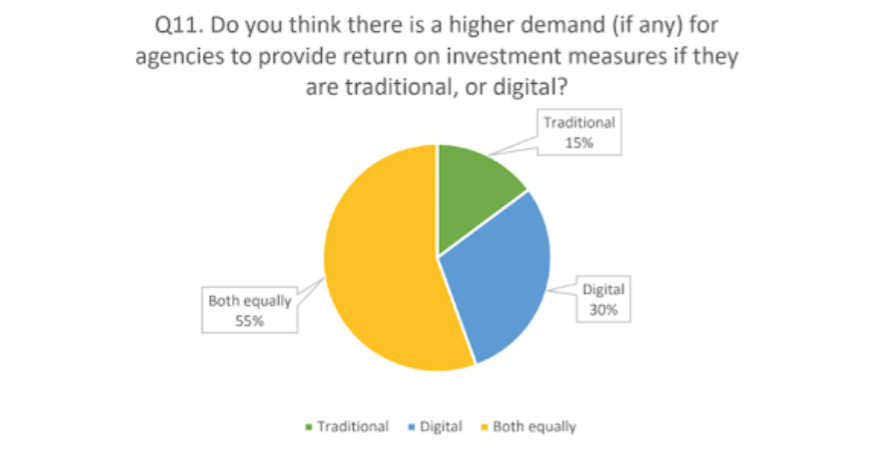 More thought (30%) that there was more of a demand for presenting digital PR ROI than traditional. 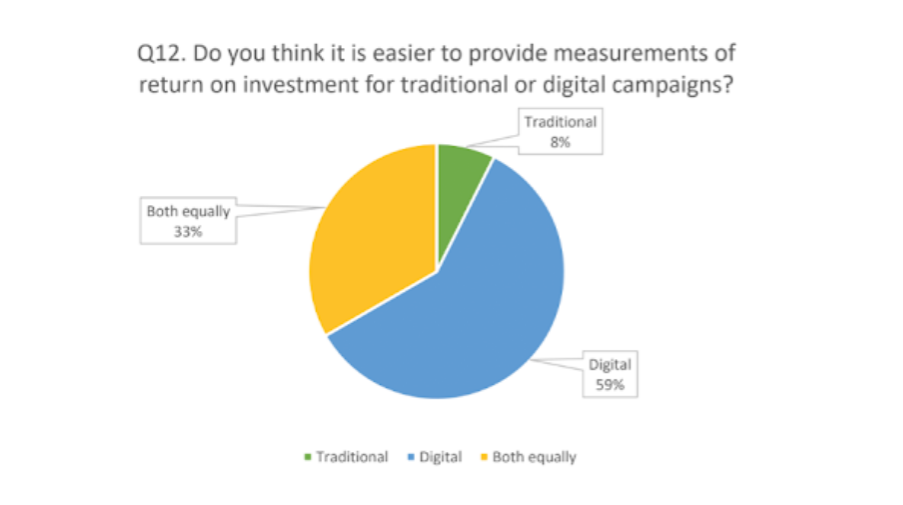 But that being said, 59% argued it’s easier to report digital ROI than traditional ROI. 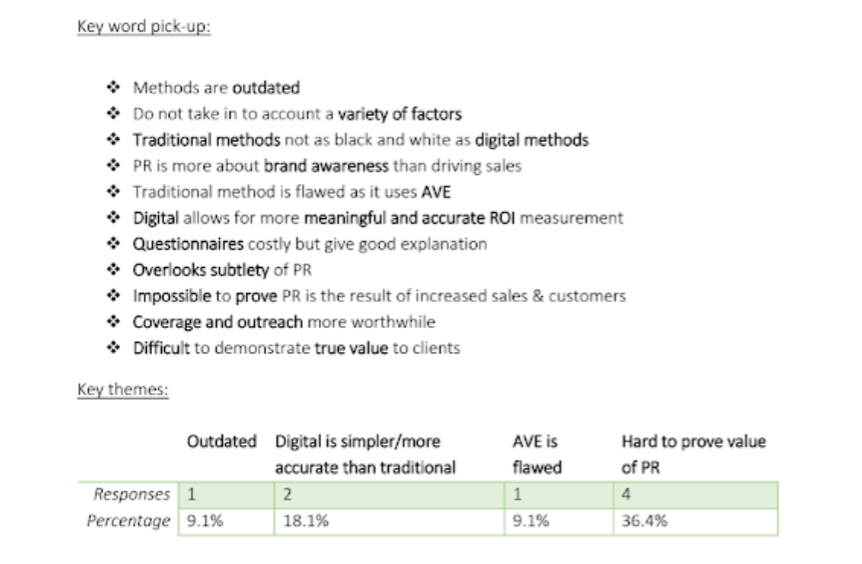 When asked in an open question of what the issue is with presenting ROI for PR campaigns, varying answers were returned. However, the general overview and most common themes were that: it’s hard to prove the value of PR, even more so in traditional campaigns, and that reporting its Return On Investment overlooks the subtly of the industry (remember what Robin Tracey said, that good PR should be invisible).

Results – What Can We Do About The PR ROI Issue?

So, after completing a 3000-word-or-so literature review, and further in-depth analysis through primary research, I found out that there’s an issue with measuring ROI for PR campaigns. We know it needs doing, but there’s no one true method that demonstrates value and gives credit where it’s due.

AVE is inaccurate, and presenting coverage on a page is too vague. (There were several other methods that were used, but also credited as flawed such as analytical data, the Barcelona Principles, Perceived Value and so on…)

So what can we do?

I proposed that there were two steps that could be taken to address the problem: