Review: Business And The Culture Of Ethics 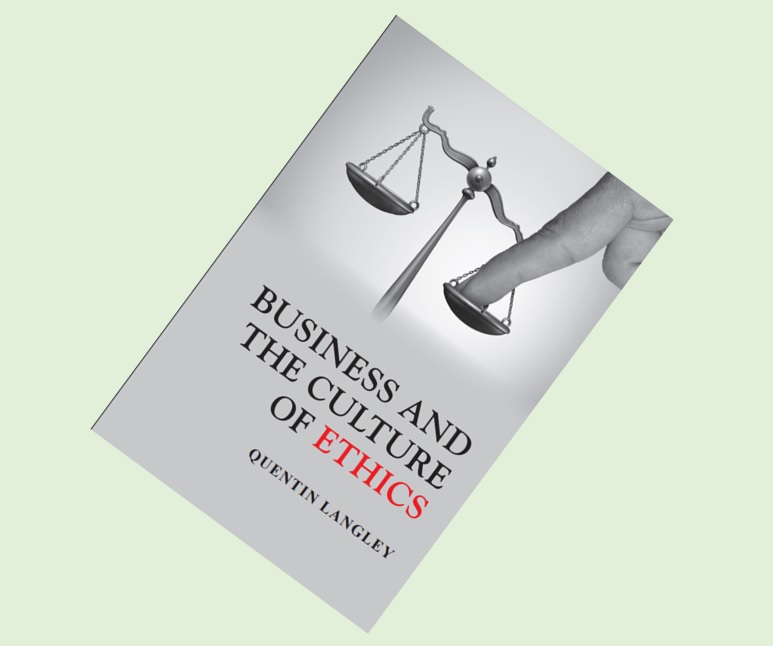 Business and the Culture of Ethics
By Quentin Langley
Business Expert Press, 2020, 164 pages

I’d not noticed this book when it came out, perhaps because the author, who is a British practitioner and educator and Fellow of the CIPR, has been living in the United States for the past few years working as a coach, consultant and lecturer in New York.

But having been sent a PDF version of the book by the publisher, it’s time to take a fresh look at ethics, this time from a broader business perspective rather than the more usual professional or academic perspectives.

The book has been written for educational purposes – either for use on university business courses or within business training.

The first chapter, What Are Ethics?, opens with a novel distinction between morals and ethics. Langley writes: ‘Morals are absolute guiding principles, whereas ethics are more contextual.’ He goes on to explain that the context depends on the business or profession.

If you tell a police officer that you’ve committed a murder, you can expect to be arrested. If you tell a lawyer, then they might be willing to prepare your defence. If you tell a psychotherapist or a priest, they might explore your feelings or your conscience. Same situation, different ethical approaches to the problem.

It’s a refreshing and surprising approach, and Langley writes in an engaging style. Here’s how he introduces deontology, one of the main schools of ethical thought.

‘When is it okay to lie?
Kant would argue never.’

He goes on to explain the ‘categorical imperative’ in simple terms. When he turns to the rival school of consequentialism, he warns us that this approach ‘can lead to you torturing seven-year-old girls’ (no time to explain this leap, but it’s another fresh and surprising insight).

Adam Smith and Karl Marx are cited here alongside the usual suspects Immanuel Kant and Jeremy Bentham. Each chapter ends with a practical and an academic exercise depending on which type of class or course an educator is preparing.

After primers on ethics and morality, the book turns to business challenges and dilemmas: corruption (should you ever pay to facilitate an overseas contract or to secure media coverage?); accountability (should descendants of slaves be compensated?); diversity (what about affirmative action?); animal rights (should we eat meat or wear fur?; should ritual slaughter be banned?); safety (is it ethical to manufacture and sell cigarettes?). There are also chapters on data and on the media.

The chapter on Corporate Social Responsibility gets to the heart of business ethics. Langley points out that it should be in a firm’s best interest to act well in relation to employees, suppliers, customers and wider society (the stakeholder view). Should. Yet CSR feels like an outmoded concept, in part because it’s incapable of being externally audited unlike ESG which is driven by shareholders and institutional investors.

Beyond ESG, there was an opportunity to discuss the nature of capitalism and to explore purpose (as well as greenwashing and purposewashing). This demands a discussion of contrasting approaches to capitalism, shareholder capitalism and stakeholder capitalism. Langley approaches this by contrasting the well-known view of Milton Friedman – that managers of a business are solely accountable to its owners – with Freeman’s stakeholder theory. He discusses the pros and cons of co-operatives, which in theory square this circle, though in practice often lack the decision-making agility of a for-profit business.

Forms of capitalism could have been explored further. It may be oversimplifying to suggest the US favours shareholder capitalism while Europe favours a stakeholder approach, but the author would be well placed to take this discussion further having worked and taught on both sides of the Atlantic. Perhaps a stakeholder view is too limited; some who defend China’s undemocratic model of state capitalism argue that it’s a better long-term approach, able for example to take into consideration the interests of unborn future generations, a group who never appear on anyone’s stakeholder mapping exercises.

I recommend John O’Brien and David Gallagher’s Truth Be Told to those wanting more on purpose and sustainability and a broader discussion of the future of capitalism.

Langley’s book reads like a thrilling university seminar: it asks the questions, and leaves the students to explore their thinking and reach for satisfactory answers.

It’s written from a US perspective and makes frequent references to the clash between liberal and conservative world views. Could this US perspective explain the frequent mentions of ‘the invisible hand’ – a concept drawn from moral philosopher Adam Smith’s The Wealth of Nations?

Smith was a Scotsman but his book was published in the same year that the United States declared independence. The ‘invisible hand’ argument can be interpreted as a case for small government in that Smith argued individuals are best placed to make decisions over matters that affect them. Note how there’s a visible but disembodied hand tipping the scales in the design for the book’s cover.

To take the ‘invisible hand’ argument further, it suggests that the seemingly insignificant actions and decisions we take as individuals collectively amount to something significant. You can see how this works when individuals cast their votes in a democracy, or make purchasing or recycling decisions, or change their diet. But will an invisible hand be firm enough to guide us away from extinction?