Gareth Thompson is a Senior Lecturer at London College of Communication. His book Post Truth Public Relations: Communication in an Era of Digital Disinformation was published by Routledge in 2020. 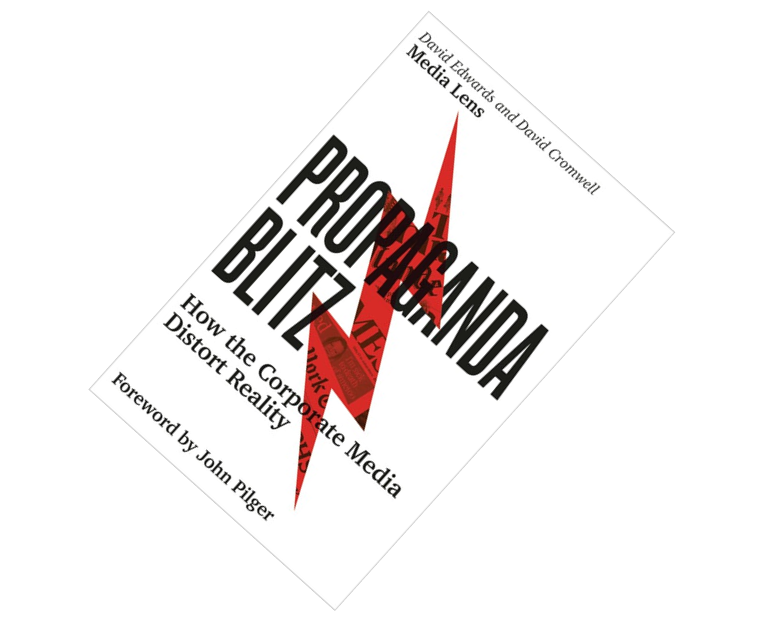 The authors of this 2018 publication, David Edwards and David Cromwell, founded the critical news site, Media Lens in 2001 and their thought-provoking book draws on many years of monitoring and analysis of what they describe as the “corporate media”.

Despite its relevance to the field of public relations – and warm endorsements from high profile figures, including Noam Chomsky who recommends Propaganda Blitz as “a great book” – I had not encountered the work of Edwards and Cromwell before nor seen it cited in relation to public relations. So putting aside that oversight and the resulting gap between publication and this review, what follows is an introduction to a book that is rigorously researched and novel in its outlook, that unsettles some long-held orthodoxies about balance in mainstream media coverage in ways that have relevance to all PR people.

In April 2021, the playwright David Hare published a satirical poem on the pandemic, which targeted the British media as well as what he describes as a “corrupt government.” In an interview about the project with The Guardian (Brown, 2021), Hare was critical of the media in general for its “tremendous dereliction in the public realm” during a pandemic when it simply went on “walkabout” and abandoned its job of “holding the government to account.” According to Hare, one result is that the nightly BBC TV News now resembles “more or less something you might expect from Pravda or the Russian state broadcasting office”.

In their ongoing analysis of the British media, Edwards and Cromwell make a similar set of criticisms of bias and negligence in Propaganda Blitz. Their method is innovative and involves writing polite emails asking why an individual journalist has presented such an unbalanced report, with the letter including the counter-balancing evidence. Beyond the meticulous level of research behind these interventions, their work is not just another voice listing alleged failings in the right wing media but focusses on those media outlets that would describe themselves as producing reliable, factual liberal journalism, such as the BBC, Channel 4 News and The Guardian.

The book is also prescient in many of the themes and media outlets it pursues, which have become prominent as a result of the UK’s response to the global pandemic. There is a lengthy chapter on “The BBC as a propaganda machine”, for example, and another on issues relating to the NHS. Several chapters include the authors’ analyses of the media coverage on varied themes and recent events, including the Scottish Independence referendum, climate change and the Middle East, with separate chapters on Libya, Syria, Yemen and issues relating to Israel and Palestine.

However, one of the main claims of the book that I found simultaneously fresh, convincing and unsettling was that the very idea of a reliable mainstream media or free press is an illusion, or, to quote Edwards and Cromwell, it is “a political, cultural and intellectual prison masquerading as a window on the world”.

Despite the appearance of a diverse spectrum of media opinion, “corporate media conformity” results in a narrow set of views and news as so many supposedly critical and independent journalists all end up “travelling in exactly the same direction” and imposing “the same power-friendly propaganda on key issues,” whether it is the geopolitics of the Middle East, national politics or climate change. In the view of the authors, it is only exposing the “fraudulence of the ‘free press’” and “corporate media bias” that the public can “know and understand about all other issues” in order to make positive change on issues such as climate change possible.

The authors’ second main point of claim is that instead of fulfilling the idealised function of a “free press” in fearlessly and independently reporting the facts, corporate media engages in a form of manipulation consisting of fast-moving attacks – the “propaganda blitz” of the book’s title. Edwards and Cromwell put forward a set of criteria for this mode of attack within and by the mainstream media in a useful chapter on the anatomy of the Propaganda Blitz. The components include “dramatic new evidence” and narratives that are infused with “high emotional intensity”. The desired state of understanding is then given what the authors call the “illusion of informed consensus” in which the media spectrum generates coverage that gives “the impression that everyone knows that the claim is truthful”. In turn, this “snowballing consensus puts pressure on dissidents to toe the line” with condemnation coming to anyone who offers an alternative view.

The first case study to which the authors apply this model of analysis, is the media’s treatment of Jeremy Corbyn who became leader of the Labour Party in 2015. The title of the chapter, “Killing Corbyn”, confirms the direction of travel but the investigation of the media coverage of the Labour leader is meticulous. The chapter offers an original telling of the Corbyn years, including the sometimes hysterical ranting against the leader and his supporters (“Corbyn’s morons” according to The Sunday Times) as “senior corporate media figures virtually queued up to smear Corbyn”. Beyond the usual suspects on the right, the authors list The Guardian, The Independent and the BBC’s Laura Kuenssberg as among the “trophy hunters”.

Other detailed case studies follow this chapter, with the 63 pages of reference notes in the book giving some indication of the thoroughness of the research. A chapter on the mainstream media’s own coverage of the fake news theme concludes the book with a fresh flourish of the originality and insight that runs throughout Propaganda Blitz and which make the book’s viewpoints of such potential value to all who work in the media and PR, alongside those of us who research the field.