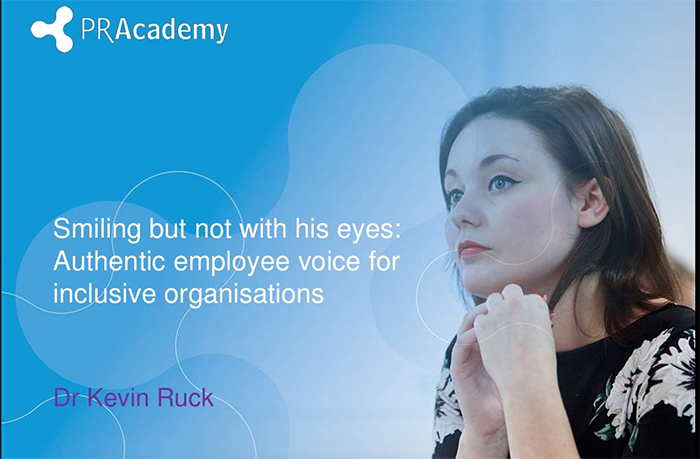 Smiling but not with his eyes: Authentic employee voice for inclusive organisations

Employee voice is starting to get more attention within the internal communication community. It was discussed as part of the CIPR Inside Group’s Making it count report discussion at their conference on 1 November. And the Institute of internal Communication (IoIC) recently ran a dedicated seminar on voice.

Voice is not a new concept. It dates back to associations with trade unions in the 1980s, although it has broadened in scope to be seen today as the way that employees have a say about what goes on. It featured heavily in the respected MacLeod and Clarke ‘Engaging for Success’ report in 2009 as one of the four enablers of employee engagement. More recently, voice has been included in the government’s Industrial Strategy White Paper as a foundational aspect of success.

In my PhD research, a significant and positive relationship was found between employee voice and emotional organisational engagement. The CIPD reported this year that satisfaction with voice is increasing and claim that “employee voice features prominently in research on high-performance work systems, which points to links between ‘high involvement’ management styles and performance”.

In the interviews and focus groups I conducted with employees, voice emerged as a prominent concern. Three critical aspects of voice were established from template analysis of qualitative data:

Participants said that when managers listened to them it is a sign of a progressive organisation. However, when managers do not listen it can have a profound impact, as the following quote illustrates:“You know, he was not interested in listening to me. So after thinking of an idea, I actually stopped my input”.

A lack of interest in listening to what employees say is symptomatic of a culture where communication is primarily reflective of management interests.[i]

Participants understood that not every comment may get an individual response. If they can see that, in general, feedback is being taken on board they said this would be engaging and make them “feel valued”. However, participants said they can sense when there is a feeling that what is said is not going to go anywhere – described as “smiling but not with your eyes”.

The fear of retribution in speaking out is real for participants, as illustrated by the following quote:

“I think you will find a lot of people won’t come forward and ask the burning questions that are keeping them awake at night because they’re scared of the response, no matter how pleasant the senior person”.

The results of the study are being presented at the CIPD Applied Research Conference in Glasgow today (1 December 2017). The results support a “discursive leadership” approach focused on unplanned, informal and brief conversations.[ii] This approach to leadership means that communication becomes “the primary concern rather than a secondary or tertiary consideration”.[iii]

Participants stated that that they prefer informal communication settings for employee voice where senior managers talk the language of employees rather than corporate jargon. These can be face to face or using Enterprise Social Network (ESN) platforms; it is the informality that participants stated creates trust and safety to speak out.

To conclude, the study suggests that not only should managers develop specific communication capabilities required for employee voice such as authentic listening and responding, they should also consider communication to be a primary concern. This entails prioritising the allocation of time for systematic employee voice as part of a broader internal communication strategy.

Smiling but not with his eyes: Authentic employee voice for inclusive organisations from Kevin Ruck