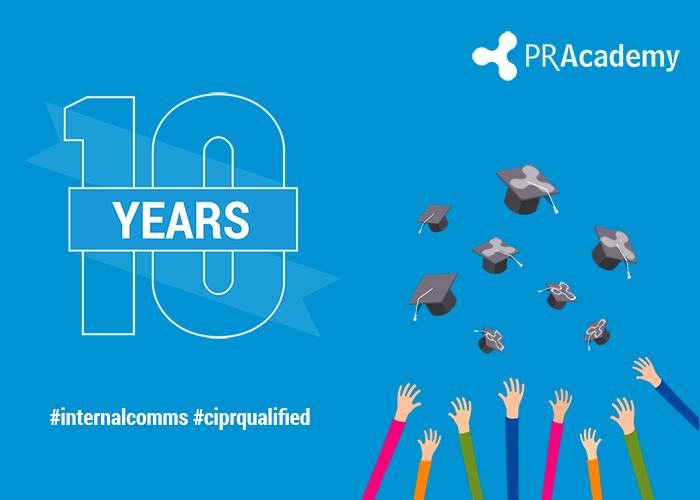 The Chartered Institute of Public Relations (CIPR) internal communication qualifications that I initiated and designed are ten years old this year.

It’s hard to believe, but prior to 2008 the only professional internal communication qualification in the UK was a post-graduate course provided by Kingston University.

In the past ten years, more than 1,000 practitioners have completed the CIPR Internal Communication Certificate or Diploma qualifications provided by PR Academy. Many have gone on to forge a successful career as an internal communication specialist. Some have moved into a broader public relations role. Others have moved to a different organisation where internal communication is highly valued. And it is always a joy to catch up with graduates at a conference or event where they often tell me they are still using some of the models taught on the course.

The qualifications are grounded in theory and concepts that can be applied to practice.

But when the first courses started in 2008 there were no dedicated textbooks on internal communication.

The first edition of ‘Exploring Internal Communication’ that I edit and co-author was published in 2009 specifically to support the CIPR qualifications and it is now in its third edition. There is also evidence that more theory is being established through academic research. A quick search in the journal Public Relations Review shows that the number of internal communicate articles, book chapters and conference abstracts has increased significantly. There was an average of just 90 publications per year from 1998 to 2007 but this has risen to 169 per year for the past ten years.

The publication of the government sponsored report ‘Engaging for Success’ in 2009 was a watershed moment. In identifying two of the four enablers for engagement as strategic narrative and employee voice it highlighted the role that internal communication plays in engagement. This was helpful for practitioners in building a business case and for academics who provided underpinning research to support the association between internal communication and employee engagement.

Digital communication has also had an impact on practice during the last ten years. It is covered in the course when we discuss channel management, content creation and content curation. Although platforms such as Yammer and more recently Workplace by Facebook have been relatively slow to be adopted (see my report on this here) there is no doubt about the potential for enterprise social networks (ESNs) to transform practice in the next ten years.

Professional qualifications are part of what it takes for a strategic discipline to be recognised.

That was a main driver for establishing them. Recognition and credibility takes time. But after ten years there are positive signs that qualifications do matter. In research conducted recently by recruiter VMAGROUP, it was reported that some employers are now insisting on a specialist internal communication qualification.

Congratulations to the 1000 plus internal communication certificate and diploma graduates for making a commitment to professional development. Slowly but surely, by applying concepts from the course you are playing a vital role in establishing what you do as an important, strategic management function that is good for organisations and good for employees.