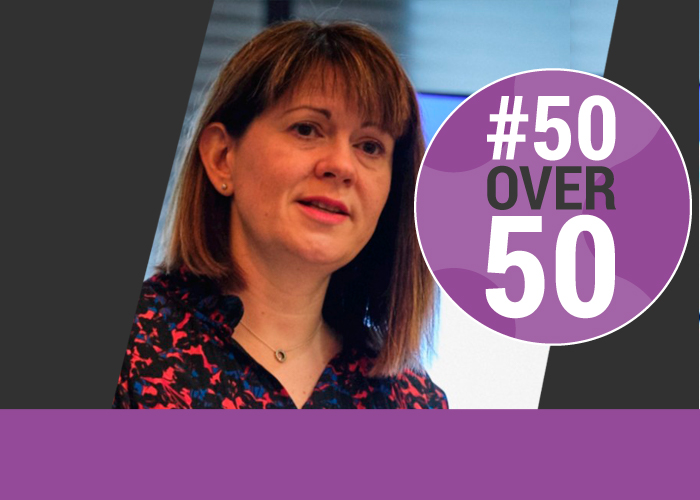 Is there anyone working in our sector with a greater commitment to education and professional qualifications?

Emma Leech has two degrees, she is a fellow of seven professional bodies and is chartered in three and has worked in public relations and comms roles for seven different universities.

‘I’d been surrounded as a child by women who were bright but never got further than a basic level of education. My nan was working from 14; my mum started working straight from school at 15. Both were bright but unable to capitalise on that.

I always saw education as a tool to freedom and autonomy. I’m a passionate believer that education changes lives.

‘My first job in PR was working in fashion and consumer. I did that for a number of years and it was quite exciting, but it felt a little bit soulless to me and I realised in my early 20s that I wanted to move into something a bit more important (and that’s not to be dismissive of those who work in other sectors at all). It was about values.’

Her first university role was at Leeds Beckett as is (Leeds Metropolitan back then) as PR manager. She has subsequently worked for Bradford, Salford, Manchester Met, Nottingham, Loughborough and now Nottingham Trent universities.

‘Education provides people with the power to take their destiny into their own hands; to meet new people; to extend their networks; gain skills; have opportunities they would not otherwise have.

‘Another important aspect of universities is their research. A few years ago, I sat at a dinner table next to Sir Peter Mansfield, the inventor of the MRI – and this was a couple of years after I’d been diagnosed with cancer. To be able to sit there with someone who had invented something that had actually helped save my life with an early diagnosis –  that really hit home to me the importance of the work universities do.

‘The other strand is the civic impact in making towns stronger and more vibrant. Student-bashing is fashionable, but students also contribute masses (and not just financially) to local economies in terms of the energy they bring to towns and cities and in relation to the volunteering they get involved with.

‘There’s so much about working in a university that I love; the fact that I’m surrounded by really bright, passionate people all day. And I get to learn so much about so many different subjects.

‘Unlike companies with a similar turnover where profits go in dividends to shareholders, universities put a lot back into the communities they serve. They are economic multipliers. I’m not going to claim that the fee income isn’t important to universities, but that is not the one overriding motive to explain why universities exist.

‘It is a big role; it’s intensive’ she says of a university comms role that embraces marketing, recruitment, employee engagement – and with the challenge of frequent crises. She’s also proud of her community-building achievements, citing Loughborough as an example of what can be achieved with a tight budget.

‘Loughborough is smaller and campus rather than city based. Where I’ve been lucky in my career is seeing things others don’t, and identifying the USP of an organisation, and how to genuinely build on that. I was lucky to work with some talented people at Loughborough; by sorting our messaging and by advocacy work the ‘Loughborough family’ concept is now firmly embedded.’

‘Where I’m currently working [Nottingham Trent] is a different type of institution, and it’s one that has a strong and passionate vision and a drive to reinvent what university can deliver for people, with a huge focus on widening participation and social mobility – offering opportunity to people from very different backgrounds.

Given the breadth of her roles, why the commitment to public relations professionalism?

‘I worked really hard to gain my qualifications part-time, many of them self-funded. I did it alongside working because I was not able to go to university at 18. For me, the opportunity to develop professionalism was important. PR was my very first area of interest and I worked hard to gain my CAM Certificate and CAM Diploma because I didn’t have a degree at the time – and couldn’t be admitted as a [CIPR] member until that came through.

‘If the messaging and the narrative is right, and the creativity of thought is right, then marketing is for me much more about channels and opportunities.

‘I went on to join the Chartered Institute of Marketing and gain a CIM Diploma; I’m a fellow of seven professional bodies and a member of two more; I’m chartered in marketing, in PR and in management. I’ve tried really hard to ensure that my skill set is rounded but still, everything I do comes back to communications at the core.

‘I placed comms and the messaging at the heart of everything I did. For me the CIPR has always been my mothership organisation. I’m less interested in the constant discussion about having a seat at the table: you gain a seat at the table by proving your worth. Whether you call yourself PR or communications is a moot point: one of the beauties of language is that it constantly evolves.

‘Rather than whingeing about other disciplines eating our lunch, let’s be more proactive. We have the ability to reach out and to reach into their markets. We have the ability and talent and energy to prove what we can do – particularly in crisis situations. The PR folk are the first people called into the room when there’s a problem. Good communications supporting employee engagement is critical.

‘PR people can generate ideas that can be built on in marketing campaigns. Take content: is it PR? Is it marketing? Well, rather than sitting about navel gazing, let’s grab it.

‘For me, PR is a forward-looking discipline. If you deliver something that’s good enough, you’ll be at the table.

‘A big part of my role has always been ‘speaking truth to power’. The Yorkshire accent comes in handy: people can assume you’re a little bit slow. You just listen, hear them out, and then double-whammy them at the end of the conversation with the right advice.

‘I’m the first person that’s called as soon as there’s a problem, whether I’m on the board or not. It’s the quality of your input that’s vital.

That Emma started out in fashion PR promoting wedding dresses comes as a surprise. Another is her past involvement in the RAF.

‘I spent a number of years (teens to late 30s) being actively involved in the Air Cadets (Royal Air Force volunteer reserve)’ she tells me. ‘I also qualified as a mountain leader at the time and did my training with instructors from the marines.’