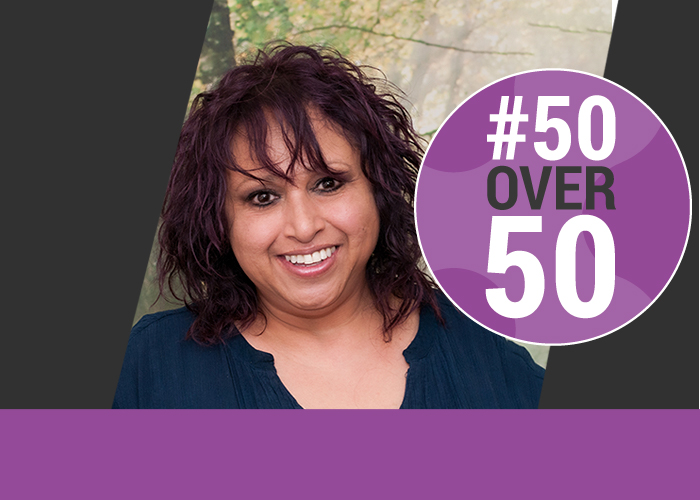 Katy Howell wears a t-shirt proclaiming ‘The Future is Female’ during our conversation. Yet, she tells me, ‘Google thinks I’m a 30 year old man because of my interest in technology. I come across as being younger, and technology focused – and therefore male. So AI can get it wrong!’

Perhaps it’s no surprise that Google has misunderstood her. She’s many things: behavioural scientist, social media expert, enthusiastic knitter, Jedi – and this year she’s also become an activist. More on that later.

Most of all, she’s a serial high-achiever despite claiming to have hit the glass ceiling and feeling that her face did not fit in a previous ad agency role.

I’ve had a really wiggly career. I came to the workforce in the late 1980s with a degree in plant sciences and genetics. But my mother and my sister have both worked in comms.

‘My first job was in telesales. I bought my first house at 23 as a consequence of this.

‘Later, I only lasted about eight weeks as a recruitment consultant, but then worked in exhibitions and stayed for six years during which time I had two children.

‘I have a maths head and an arts head. I always encourage people to be more than they are: don’t put yourself in a box.’

‘My mother calls me a ‘why child’. I’ve always got my fingers in things asking how they work. While at [ad agency] DDB I started to work in interactive TV and gained an interest in digital.

‘Back then the company was mostly from similar backgrounds, well-educated and rather homogenous: my face did not fit on any level and I hit the glass ceiling and had to keep justifying my existence. I’d been supporting their nascent digital agencies and realised there was this amazing opportunity for companies to get close to their customers.

‘So I resigned, took clients with me and set up on my own. I had 20 clients including EMI. I was operating like an agency but it never occurred to me that that’s what I was doing. I was a consultant talking to people about how they could use what was at the time called digital PR because there was no social media as such.

‘I was getting up at three in the morning and working until midnight, with two small children, so I persuaded my wonderful husband to give up work and look after the children.

‘I’m an accidental agency owner, but was driven by my fascination with social. Alongside the technology came an absolute love of behavioural science which is what has sustained me. New tools allow us to look at swathes of unstructured data: I’m fascinated by why we behave the way we do.

‘We’re seeing a behaviour change this year. During the pandemic people are investing more time in researching products, and you can see this in the data. I find it so interesting.

‘Why do we assume old people aren’t on social media when I can see them on Facebook? Why do we focus on the young when the people with disposable income are more like me?

‘The thing I love most about communications and marketing is it’s a craft. Marketing is never about what you want, it’s about what the audience wants. I am a master craftsperson: that’s how I view what I do.

‘Social media combines behavioural science and technology. The wonderful thing about social media is the mobile phone. It is such an intimate place in which to capture people’s attention in an extraordinarily intimate way because you’re in the palm of their hand. You’re right in front of their face, all consuming. But it’s not a conversation anymore, because the idea that anyone wants a conversation with a brand other than when they’re complaining is idiocy.’

She’s been CEO of Immediate Future, her social media agency, since 2004 (a time when there was little social media). She’s been driven by the need to ask ‘why?’ and to find out how things work, ever since putting herself through an MS-DOS operating system training course aged 16. ‘We work with recognisable brands from Fujitsu, Thompson Reuters, Sony Music and Princess Cruises. We live, breathe, eat social. There’s always something new to learn: I love that.’

So to her newfound activism in 2020. ‘As Black Lives Matter broke, I got increasingly frustrated at the virtue signalling that was going on by agencies when I knew it was bollocks. I am not black, but rather of Indian parentage. But as an older person who’d been through this I felt someone should call out the agencies for not being as honest and truthful as they should be.

I haven’t got the luxury of waiting another 20 years for things to change: I want to change things for the youngsters coming up. I want no woman, no person of colour, to feel isolated.

‘In our industry no one would come out and be openly racist but there would be microaggressions.

‘When social came along there was incredible hope. I set up Immediate Future because there was this opportunity for brands to have a conversation with their customers. But in the ensuing years we’ve seen a tangle between politics and subversion and commerce and companies that have used social in ways that are not always ethical. It has left us all trying desperately to understand what role social media plays in our lives.

‘If you look beneath the headlines, you’ll find lots of good things [on social media]. I belong to our local neighbourhood group on Facebook; there’s a wonderful community spirit.’

It may have been a ‘wiggly’ career, and she may defy categorisation by Google, but it seems to me that Katy Howell combines a breadth of interest with a focus on what it takes to succeed.