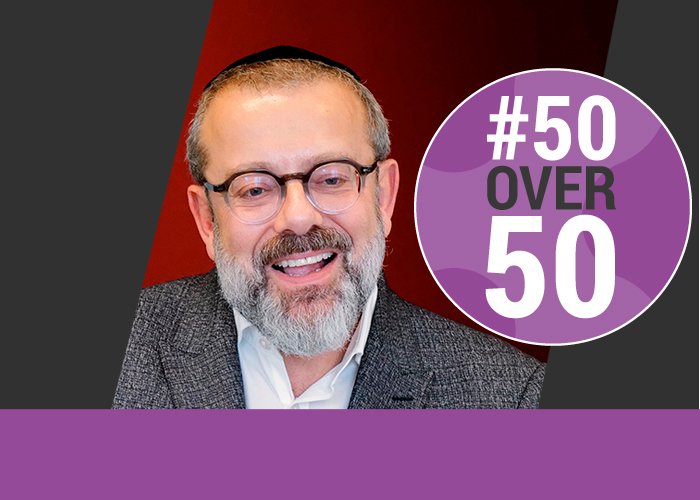 ‘I don’t run a business: I do the business’

‘Being Jewish is central to my life,’ Shimon Cohen tells me.

It also explains how he first gained high-profile experience in public relations, how he was introduced to Tim Bell and why he later found himself writing a speech for Nelson Mandela.

Cohen’s great-grandfather’s family had emigrated from Ukraine in 1911 (then a part of Tsarist Russia) and had settled in south Wales, learning English and Welsh and integrating into society. Shimon grew up in Cardiff.

He’s now chairman of The PR Office which he established in 2004. The firm has grown consistently, even through the pandemic, and now employs 16 people with a high ratio of revenue per fee earner and a strong reputation in the industry.

It’s a tried and tested formula, yet The PR Office will not operate in the same way post-pandemic. For one thing, the office will be less important.

‘We left our current office at the end of the lease. We’ll be moving on 22 June to a much smaller space and we’re asking our team to work from the office two days a week and to work wherever they choose on the other three days.’

Pre-pandemic he’d been a busy international traveller, but, he tells me, ‘none of our business has stopped in all of those countries we have clients: we’ve all recognised that the third Monday of the month in Dubai was more of a habit than a necessity.’

‘I’m spending more time at home which I love and the client is saving a lot of money. Yet I understand it’s not as easy for everybody who may be sharing kitchen space with others.

I learned pretty much everything I know about public relations from Tim Bell: it was about telling your client’s story. A simple way to understand the process is: where are you now, where do you want to be and how are you going to get there?

‘If you understand that you get it right. Understand who your audience is. The media is not an audience, it’s a conduit. Once you’ve missed who your audience is, you haven’t a chance of success: your message will always fail. It’s simple really, it’s public relations – relating to your public.’

‘At The PR Office, we’re true to what our profession is, that’s why we have the measure of success we have today.

‘I’m an advocate. I communicate people’s stories for them. I may have to do that in five different ways to five different audiences. In parliament, I have to anchor stories in legislation. With the public, it’s about what’s of interest.’

Before joining Lowe Bell, which later became Bell Pottinger, Cohen worked for ten years as Private Secretary to the Chief Rabbi of the United Kingdom and Commonwealth. ‘In effect, I was his PR guy but we didn’t use that term then. The Chief Rabbi needed to communicate to Jews but also to wider society. I was writing his speeches and we started to talk to the newspapers – this had hardly been done before.’

‘The Chief Rabbi had been elevated to the peerage and retirement was looming. Lord Young, Secretary for State for Industry in Margaret Thatcher’s government, took me to lunch. This is what he told me.

‘Let me give you a piece of advice: when he retires, you will be the most important person in the office of the Chief Rabbi because the successor will need you desperately. But then after a few months he’ll edge you out because he’ll want his own people around him. So my advice to you is to get out now while your currency is absolutely at its highest. I’ve got a friend called Tim Bell. I think you should go and see him.’

‘I went along to see Tim Bell one evening. ‘So, what do you do? He asked me. I said I was interested to know what he did and he talked for about an hour. At the end I said, ‘I do exactly the same as that.’ Only I didn’t know it was called public relations.

‘And Tim Bell said: when are you going to start?

‘The Chief Rabbi was going to retire in nine months. I spoke to him and he said I shouldn’t miss an opportunity like this.

‘Soon after I started, Tim Bell told me to go to Cardiff to get to know the Welsh Development Agency, a client. So I went and related to my public: we talked about rugby, about beer, and about life in Wales. We renewed the account and they became my premier client.

‘I’ve a huge amount of warmth towards Tim Bell. But in my opinion it was a mistake to float Chime Communications on the Stock Exchange in 1994. We all made money, but it was still a mistake. Our audience ceased being our clients and became analysts. The focus changed. The emphasis was the stock price rather than the clients.

A decade later I left in a huff. Around 2003, I won an account with a group of people who used to be at EMI Music. They, together with Dave Stewart of the Eurythmics and Brian May of Queen, had agreed to organise a concert with Nelson Mandela to raise awareness of AIDS in South Africa. My job was to run international comms. As well as this, I had to write a speech for Nelson Mandela to deliver at Green Point Stadium to 100,000 people.

‘I’ve had a very fortunate career, but that was one of the highlights. I flew back and arrived in London early in the morning. Should I go straight to bed (I was exhausted), or take a taxi and join the 8.30 management meeting and show off having just spent a week with Beyonce and having written a speech for Nelson Mandela?’

‘The chairman of the meeting would go around the table asking people what they’d been up to. There were about a dozen of us in the management team. He then gets to me and says, ‘time’s up’. OK, I’m a show off, but I have no time for small minded petty jealousies.

‘So I went straight up to Tim Bell’s office and told him I was resigning, explaining what had happened. The company had lost its way, it wasn’t a PR business anymore. I have to add, that all this was 15 years before Bell Pott went so very bad!

‘When I told my father, a successful businessman, that I’d left a job in a large business to set up on my own, he gave me this advice: the most important thing you need to know is what you’re not very good at. This led to me outsourcing HR, finance etc. I do not run a business, I do the business.’

‘I left a business rather than starting a business. I set up on my own and the business grew around me. If I’d had a business plan, I’d probably have started it with a partner.

‘This is the most exciting and wonderful industry in the world. I love talking to journalists; I love the public affairs and advocacy side; I hope that legacy lives on. I’ve had clients for 20 years: it’s about relationships.’