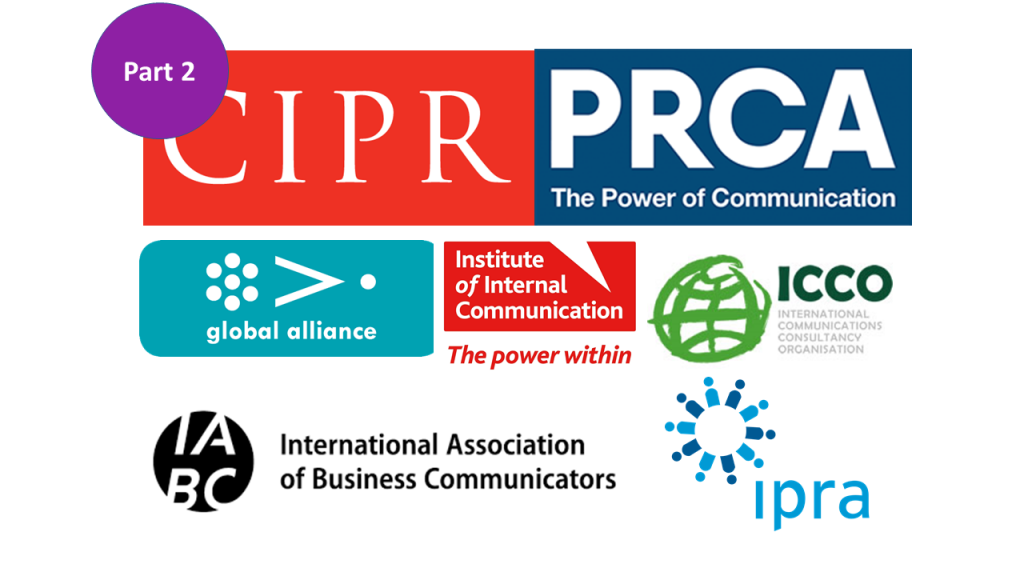 In part one, we focused on national membership associations, from a UK perspective.

In this second part of the briefing, we turn to international associations. Who provides leadership and global governance of public relations? Is such a project possible or desirable?

The timing was no coincidence. The US and UK had been instrumental in winning the Second World War (though the Soviet Union’s contribution should not be overlooked), and there was a need for postwar reconstruction along with the promotion of liberal (free market and democratic) values and, in the case of Britain, a necessary retreat from empire. The rebuilding of a (since reunified) Germany and Japan as economically successful and politically stable are prime examples of the merits of this project.

This was the era of optimism around the United Nations (to this day based in New York city), and a consensus around ‘peace and prosperity’. This postwar consensus was further boosted by the collapse of communism in the late 1980s. Western-style liberalism appeared to have triumphed.

Why is this narrative relevant to public relations? To establish that there was a postwar consensus around economic and political models, and that public relations was part of this project. It explains why public relations is widely seen an Anglo-American export and why English has become the global language.

It’s a flawed narrative, though. The rise of China (some market liberalisation within a one party state with tight controls on the media) did not conform to the Western model, and the nationalistic and populist turn in US and European politics (tighter controls on immigration, barriers to free trade, attacks on international institutions) represents an end to the postwar consensus. Nationalism seems to be winning over internationalism.

Nor would all agree with this narrative. Liberalism is now framed negatively: the term neo-liberalism (meaning new liberalism) is only ever used to depict an unequal world which has benefited the elite, not the masses and which places dogma (for example around privatisation) over a public service ethos.

Yet a narrative is useful in order to analyse the contribution of international public relations associations to the growth in public relations and the drive for standards of ethics and professionalism while achieving societal legitimacy.

Our story starts with the PRSA and CIPR, but these are primarily national membership associations that make no claim at global reach or governance. (They both have some international status, though, and the CIPR has exported its professional public relations qualifications to countries in Africa and Asia.)

The international story gains some momentum with the International Public Relations Association (IPRA).

IPRA had high aspirations, and it attracted senior practitioners to its membership and so became an exclusive club with membership in the hundreds spread across many countries.

We have already seen from part one of this briefing that associations compete for members and compete to establish a credible and representative voice. This is also true in the international context.

Where IPRA set out with great aspirations to lead the profession, the Global Alliance has arguably taken on this role today. Not an association for individual members, this is rather the umbrella group for the various national public relations associations (including the UK’s CIPR). By aggregating the membership of these various bodies, the Global Alliance claims to represent 160,000 practitioners and academics worldwide.

From the Stockholm Accords in 2010, through the Melbourne Mandate in 2012 and the Madrid Momentum in 2014, the Global Alliance has challenged those in public relations to go beyond merely serving their paymasters’ interests to acting in the public interest. This statement is taken from the 2014 Madrid Momentum:

‘Public relations and communication management must aspire to a social purpose, serve social cohesion, and aim to bring communities together.’

I sense the influence of Professor Anne Gregory in this statement (she, let’s remember, was the then-president of the IPR who secured its Royal Charter in 2005).

Some practitioners may remain sceptical of such assertions. Others may wonder who has the time and budget to attend global meetings to discuss such lofty matters. But serving society is one of the defining characteristics of a profession and while it remains aspirational, it’s undeniably important.

So IPRA is an association of individuals and the Global Alliance is an umbrella organisation for national associations. But what about consultancies; what about internal communicators; what about academic researchers, what about those with an interest in measurement and evaluation? We’re not finished yet.

If the Global Alliance represents the CIPR and its members, then there’s an international organisation representing the global public relations consultancies.

The International Communications Consultants Organisation (ICCO) claims to be ‘the voice of public relations consultancies around the world.’ It’s led by Francis Ingham, who is also director general of the PRCA in the UK and who featured as a key player in part one of this briefing.

Its emphasis is on providing services to its members and promoting achievements through sponsorship of awards such as Cannes Lions. Don’t expect ICCO to compete with Global Alliance with grand statements about the social purpose of public relations.

IABC: The International Association of Business Communicators is a membership body for corporate communications practitioners (often with an internal communication focus). Established in 1970 and despite the international focus, IABC has more of a North American feel than the other associations in this briefing. Its Accredited Business Communicator (ABC) standard has achieved some status (there were over 800 worldwide in 2015).

AMEC belongs in this briefing as its full name is (now) the International Association for the Measurement and Evaluation of Communication. Led by Barry Leggetter, AMEC holds well-regarded conferences and achieved impressive cut-through with its Barcelona Principles from 2010 – part of its ‘Say no to AVEs’ campaign. AMEC has also developed an Integrated Evaluation Framework, available as a free online toolkit.

Embedded in the name is the most dramatic transformation of any organisation in this briefing. That’s because AMEC began as a trade association for press clippings companies (known then as the Association for Media Evaluation Companies).

It’s a long journey from media evaluation to banishing AVEs and providing an integrated framework for evaluating communication up to and including behaviour change.

It’s another way of viewing the slow transformation from a trade to a profession that provides the narrative for most of the organisations mentioned in this briefing.

Even then, there’s one more body that deserves a mention as it represents two groups with a rather different focus.

EUPRERA is the European Public Relations Education and Research Association. It exists to serve educators and research academics in Europe and is open to individual and institutional members.

English may be common language adopted for EUPRERA conferences and publications, but it’s not the first language in many European countries.

So there’s a narrative here too. Where our briefing opened with leadership coming from the US and UK at a time of postwar reconstruction, there has been a shift towards scholars from other European countries taking prominent positions in the development of public relations thinking in recent decades. (Professor Tom Watson was keen to make this point in a comment on a previous post on this site.)

Betteke van Ruler from the Netherlands, Dejan Vercic from Slovenia, Ansgar Zerfass from Germany, Oyvind Ihlen from Norway, Jordi Xifra from Spain are just some of the many examples.

In summary, there’s respect for the leadership role provided by the US and UK in the development of global public relations (both as an industry and as an academic discipline), but it’s now time for other voices to be heard.