Campaigns That Shook The World 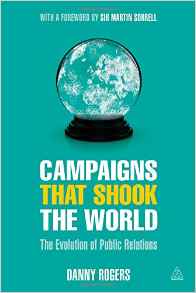 Danny Rogers, a former editor of PR Week, has a problem with the term ‘PR’. He argues that:

PR has ‘almost totally converged with other communications disciplines such as advertising and digital content marketing’. Yet he recognises the value of PR’s strength in conversational communication.

It starts with the election of Margaret Thatcher – Britain’s first female prime minister – in 1979. Tim Bell is identified as the campaign star, and he exemplifies convergence as someone who has been a leading figure in advertising and in public relations. ‘His integrated approach to advertising and PR has become the norm in corporate and political marketing’.

The book’s approach places the campaign into its social context, narrates the events and reflects on the lessons learned.

Progressing through New Labour (campaign star Alastair Campbell) and the rescuing of the British royal family after the death of Princess Diana in 1997 (Paddy Harverson), to the reinvention of The Rolling Stones (Alan Edwards) and the creation of Brand Beckham (Simon Fuller), the book demonstrates the overlapping worlds of politics, entertainment, sport and business.

The final chapter argues that the campaigns were chosen to narrate the evolution of communications from the late 1970s onwards. They share ten defining characteristics:

Reflecting on the nine campaign stars (those named above plus Matthew Freud, Jackie Brock-Doyle and David Axelrod), Rogers notes ‘all are charismatic and thoughtful, often verging on the intellectual. I would posit that such characteristics are essential in professional comms today, where one needs to grasp and distil complex issues, as well as dealing with stakeholders from the worlds of politics, business, NGOs and the media.’

‘The single thing that will define the campaign stars of the future, from being simply adequate modern comms professionals, is a strong sense of personal purpose. If their work is to engage with – even change – the world, they will need their own determination to do good, to make things better.’

It’s an uplifting and challenging conclusion and Rogers has provided a highly useful campaigner’s resource. But does the focus on campaigns work? While it does emphasise the convergence of PR and marketing in the digital age, not all aspects of the job can be viewed through the lens of a campaign – and not all campaigns are welcome (Greenpeace notoriously targets high profile corporations with its campaigns).

Not all PR jobs involve trying to win elections and repositioning bands, brands and celebrities – though his journalistic preference for headline acts and a strong narrative makes for a highly readable account.