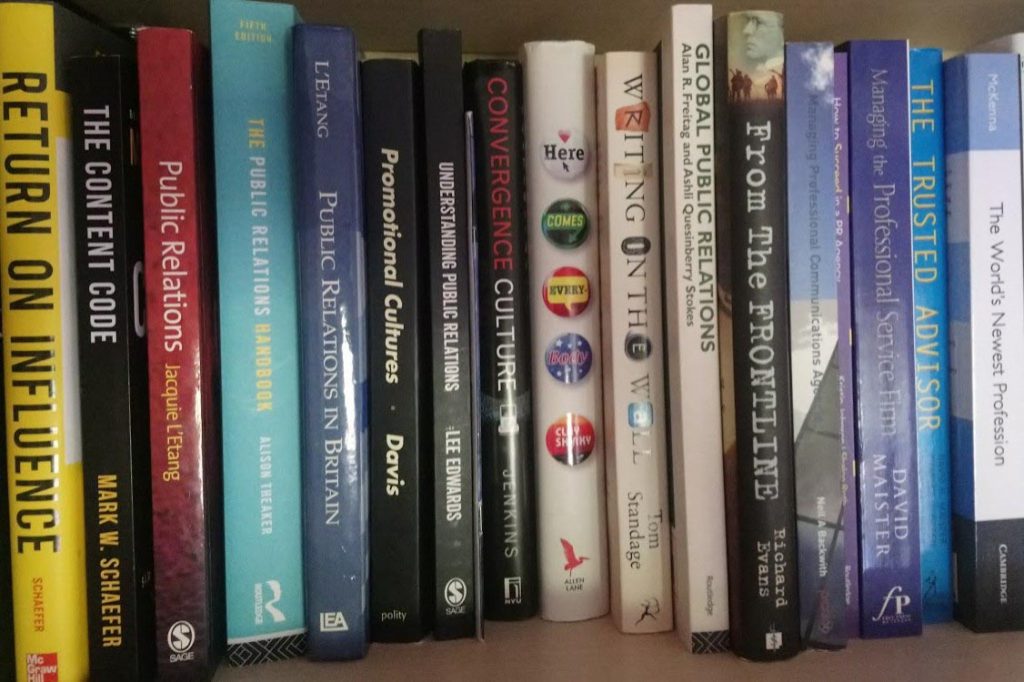 We have no intention of adding to your beach reading. Instead, here’s our pick of ten recent and forthcoming books that should interest advanced students and intelligent practitioners.

Kristin Johnson and Shalon Roth (2019) How to Succeed in a PR Agency, Routledge
This is a book written for newcomers. There’s much to admire, but one message leaps out loud and clear. From our review: ‘PR people need to be good with numbers. It’s not just that agencies need to bill for work and run at a profit, it’s that everything done on behalf of the client needs to be accountable and measurable. Hours need to be counted, outputs calculated and outcomes evaluated.’

Tony Langham (2019) Reputation Management, Emerald Publishing
An impressive first book by the Lansons co-founder. From our review: ‘There are so many interesting things in this valuable book that I don’t want you to miss the message about the direction of public relations. So here it is again: ‘There need only be two core functions: integrated marketing and reputation management’.’

Richard Millington (2018) The Indispensable Community: Why Some Brand Communities Thrive When Others Perish, Feverbee
Many of us see public relations as a consensus-seeking and community-building activity. Richard Millington has a different view of public relations, but he has unrivalled experience in the field of community management. From our review: ‘As presented here, one purpose of community engagement should be advocacy. ‘The most successful advocacy programs begin with the members most likely to advocate for the organization and gradually expand the circle from there. But finding advocates is only half the battle; keeping them is harder’.’

Mike Sergeant (2019) PR for Humans: how business leaders tell powerful stories, Practical Inspiration Publishing
Former BBC news reporter Mike Sergeant is critical of public relations practice, and is keen to reassert the role of storytelling in building reputation. From our review: ‘PR for Humans is the name of a podcast and now a book. It’s also a manifesto, with the author arguing that ‘the most powerful communication is always delivered by humans, for humans.’ And that ‘for tens of thousands of years, stories have been the main method of moving audiences and shifting opinions’.’

Sandra Stahl (2018) The Art & Craft of PR, LID Publishing
Public relations is often seen as a low-grade activity – a sub-set of marketing, or as a career option for frustrated journalists. Sandra Stahl’s skill is to depict a sophisticated advisory role that needs well-developed listening and analytical skills. From our review: ‘The chapter ‘Think attraction, not promotion’ is excellent. ‘Promotion is one-way communication, a ‘push’ of information… It is, essentially, a demand to be heard and seen.’ ‘Attraction is different. Attraction is mutual. It is a joint desire to connect.’

Lee Edwards (2019) Understanding Public Relations: Theory, Culture and Society, Routledge
The question asked by critical scholars is about the effects of public relations on society. From our review: ‘I had expected a polemical book (having anticipated the focus on race and gender and discourse around power). What we have instead is a balanced and nuanced read. (‘Public relations cannot be definitively framed as positive or negative in society and culture, since the power that it generates for different actors depends on the contexts in which it is deployed.’) This might make it less appealing to the general reader, but it’s much more useful for advanced students and educators, for whom this book will serve as a useful reader.’

Johanna Fawkes (paperback edition 2017): Public Relations Ethics and Professionalism: The Shadow of Excellence, Routledge
There’s a limited, circular argument that says that public relations is a profession because it has professional bodies; that it’s ethical because members adhere to a professional code of conduct. Fawkes looks beyond this to explore the field within the context of other professions, and in doing so provides a robust critique of the dominant theory in public relations literature. From our review: ‘Fawkes writes ‘I have long believed that the central shadow issue to PR is persuasion, and its murky relationship to propaganda… The denial of PR’s roots in propaganda leads to the denial of persuasion…. The chasm between the concept of ethical guardian and advocate undermines the field’s attempts to evolve a meaningful approach to ethics’.’

Kevin Moloney and Conor McGrath (2019) Rethinking Public Relations: Persuasion, Democracy and Society (third edition), Routledge
Published in August, this new third edition continues Moloney’s exploration into the effects of public relations on politics and the public sphere (he argues that public relations is weak propaganda). With the support of Conor McGrath, the new edition adds in a rhetorical perspective and is written to appeal more widely to advanced students and practitioners. (NB I have read a publisher’s proof copy, but have not reviewed the final version.)

Ralph Tench and Stephen Waddington (2020) Exploring Public Relations (fifth edition), Pearson
This has become the bestselling textbook on public relations in Europe since its first edition appeared in 2006. For the new fifth edition, expected next year, Ralph Tench is joined as co-editor by Stephen Waddington. (Disclosure: this textbook emerged from the public relations academics and educators at Leeds Beckett University, where I teach part-time.)