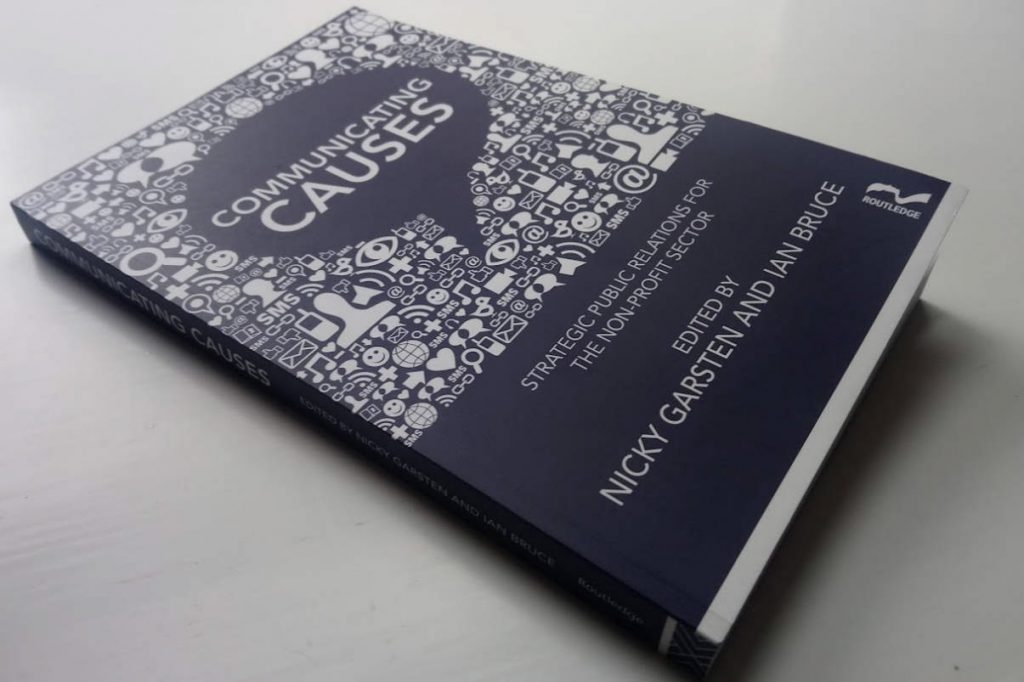 There’s a telling sentence mid-way through the book. ‘Modern NGOs are very similar to organizations in other sectors. They have professional management teams, they worry about income, and costs and effectiveness.’

With well over 150,000 charities in the UK, each one faces a competitive landscape in which to establish its brand, raise funds and maintain its legitimacy.

So one purpose of this book is to bring best practice in public relations, internal communication, branding and marketing to not-for-profit organisations.

This purpose supports the teaching of a distinctive ‘Third Sector PR’ module at the University of Greenwich, and the MA in Media, Campaigning and Social Change at University of Westminster.

The chapter authors are a mix of academics and practitioners – and one contributor is a recent graduate of the BA Public Relations course at Greenwich.

It’s a much-needed and timely book that shows how mature and varied the non-profit sector is, and how important public relations and communication now is to any organisation.

Beyond a binary world view

The book avoids the trap of assuming that all non-profits are good and that profit making businesses are necessarily less so. It explores the recent, problematic case of Kids Company, the good cause that was brilliant at building its profile and raising funds, but bad at managing money. This case is considered in a chapter on governance covering roles and responsibilities of trustees. Another chapter considers the challenges of strategic partnerships between NGOs and corporates.

There’s an attempt to provide the wider context involving an explanation of civil society and the public sphere. This is important (especially for students), but I felt that the academic referencing sometimes hindered understanding rather than aiding clarity. (I wonder why academic referencing was chosen for a book with a mix of academic and practitioner contributors, and with a readership that deserves to be far wider than university students?) Here’s one convoluted example that makes sense, but doesn’t explain itself well:

‘A brief examination of modern concepts of civil society which emerged in the late 18th century through Smith, Kant and Hegel, though the idea stretches back through Locke and Hobbes to Aristotle (Laine 2014), can inform current PR practice.’

That quibble aside, this is a valuable book with an impressive list of contributors.

Modern NGOs may not be that different from other organisations. But in large commercial organisations, public relations is sometimes seen as less important than marketing, say, or operations.

With not-for-profits, led as they are by purpose, focused on stakeholder relationships and measured by social change, public relations is undeniably central. So a book focused on ‘strategic public relations for the non-profit sector’ becomes a useful book for asserting and demonstrating the importance of public relations and communication more widely.

Modern NGOs, remember, are very similar to organisations in other sectors.

The editors and publisher have made a sample chapter available (Chapter 4 by Ann Longley and Tove Nordstrom: Beyond Clicks for Causes – Enabling agile digital communication.