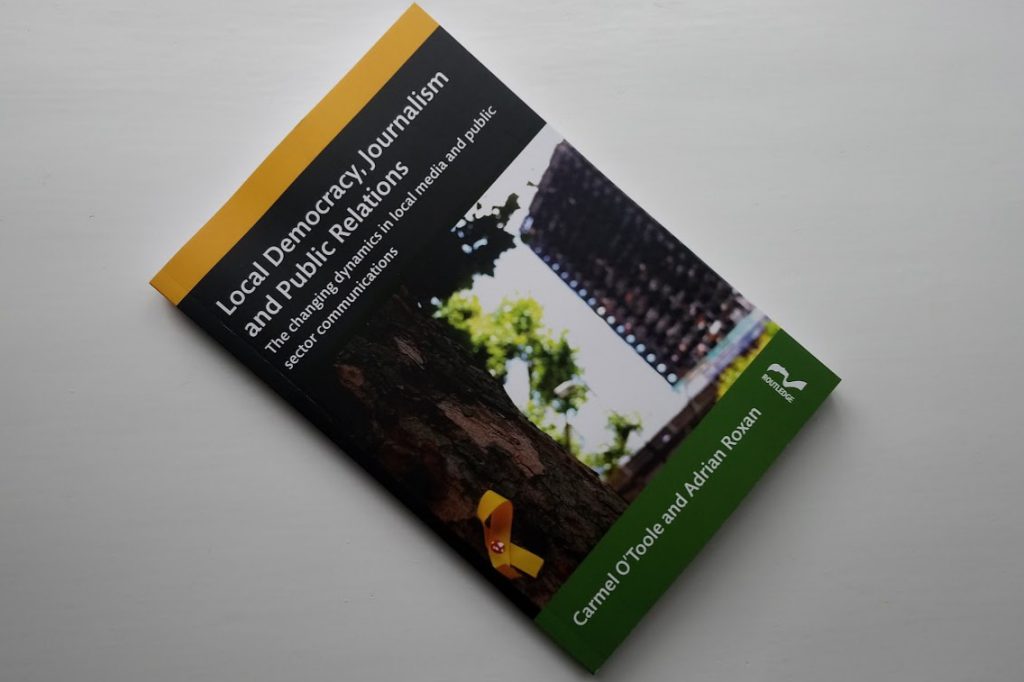 The authors, now lecturers in public relations at Sheffield Hallam University, both began their careers as local newspaper reporters four decades ago. It must seem a long lost world to their students, many born after the millennium, who will have grown up with smartphones and who may never gain the habit of reading newspapers (as well has being denied the opportunity ever to work for them).

This experience allows the authors to comment on the decline in local journalism, the shift in advertising from print to online, the growing role of the private sector in local service delivery and the ascendancy of public relations. Above all, they’re concerned with what this means for local democracy and for a sense of community. What’s left of local in a globalised world of online communication? If public must give way to private, then what’s the role – or even the meaning – of public relations?

‘The overriding theme which emerges from this book is the question of local democracy and, in particular, accountability, with the role of both the communicator and the reporter under our scrutiny.’

The book takes us through the role of local government, leading to a focus on the past decade (‘the austerity years’). The assumption made here is that public is always good, and that private is necessarily bad. Does it seem that way to their students, I wonder, who watch Netflix in preference to the BBC and may prefer to use taxis hailed through apps to travelling on public transport?

We’re reminded that four publishers account for almost three quarters of all local newspaper titles. While there has been a hollowing out of local newspaper resources, there is some hope in the rise of ‘hyperlocal’ news, often blog-based publications produced by amateurs.

It’s a negative narrative, though. Local government has been squeezed of resources; local newspapers are dying; turnout is low at local elections; local government comms teams are trying to do more for less. The overall tone of the interviews with experienced reporters and with local authority comms managers is ‘things aren’t what they used to be’. So is there any hope?

One clue is in the statistics. The editor of the Sheffield Star is quoted here saying: ‘We’ve got a much bigger audience online than in print, so yesterday the Star will have sold around 16,000 copies, and online we had roughly 130,000 unique users.’

The same editor spots a financial problem in the ecosystem for local news: ‘She muses that PROs would sell the prospect and benefits of media coverage to clients to whom they were charging a fee. They would then work to persuade local journalists to use their provided content but for free… She now charges agencies for commercially-related content.’

That in itself is not the answer as it represents a return to the past (remember ‘colour separation charges’?) and would raise greater questions about the credibility of local news if editorial were replaced by advertorial. But it’s a reminder to those in commercial public relations that the days of easy media coverage (counted as AVEs) are coming to an end.

The focus here is on localism and the frame of reference is local government rather than the wider public services (police, hospitals etc). They’re also looking at newspapers as the principal source of local news and have little to say about radio and television. Nor is there any focus on other aspects of local community engagement such as volunteering or support for local football teams.

Meanwhile, a very different narrative comes out of central government comms over the past decade. It has faced similar financial constraints and job losses since 2010 (the Central Office of Information was closed down and thousands lost their jobs). What has emerged is a high performing Government Communication Service that has shifted from a focus on media outputs to measuring behaviour change outcomes. Surely there’s a lesson here for all communicators – and above all, to those working in local government and the public sector.

There are some glimmers of hope from national newspapers too. The Guardian has shown that it’s possible to return to profit by making high quality journalism freely available while asking for voluntary subscriptions from readers – who mostly now read the ‘paper’ online.

Yet the narrow focus is also a strength of this book in that it provides a valuable historical narrative of the past decade.

For a wider discussion of the effects of public relations on democracy and the public sphere, I’m eagerly awaiting the August publication of the third edition of Rethinking Public Relations, co-authored by Kevin Moloney and Conor McGrath.