Disclaimer: I have known the author since 1989. This review is based on a pre-publication proof copy; the book has now been published by Routledge. 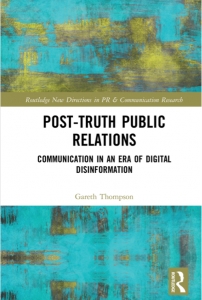 We are decades into the digital age. Computing, the internet, the worldwide web, smartphones and social media are firmly established. Much has been written from a practitioner perspective about changes to the media landscape and to public relations work, but academic opinion seems to have diverged rather than converged in recent decades.

Perhaps one simple narrative is that we’ve moved from a modernist perspective (exemplified by the Grunig and Hunt Four Models of Public Relations from 1984) through postmodern and critical perspectives. It’s Gareth Thompson’s contention that we’re now ready for a new model of post-truth public relations.

The modernist view argues for human progress and assumes that the present day is more evolved than the past. It fitted a generally optimistic western world view in the late twentieth century when there was confidence in the triumph of globalisation, free markets and democracy (‘the end of history’).

Thompson argues that the classical era of public relations lasted from 1930-2010 (reaching a ‘corporatist peak’ around 1990-2010) but that it’s now coming to a close.

He sides with critical theorists in suggesting that this classical era ‘saw PR as largely organizational and corporatist.’

Another way to frame this argument is that since public relations is largely a product of western liberal democracy (or an ‘artefact of American culture’), then what happens to it when liberal democracy – and the US – is no longer the dominant global player?

What if Russia, or China, or non-state actors like IS provided the model for post-classical public relations? Why should other countries look to the US, the UK or other European countries for leadership? Instead, we see examples of post-classical public relations all around us. Thompson describes it as ‘a performative mode of political communication that prioritises entertainment over substantive policy explications.’

He even identifies the moment the world reached ‘peak PR’, citing the remuneration of Sir Martin Sorrell, then of WPP. ‘The peak was signalled when in 2014, Sorrell earned £43m and was named as the highest-paid chief executive in the FTSE 100, beating bankers, insurers and oil company CEOs by some margin.’

This is a strength of this book. Other authors can provide a narrative based on a reading of sources from Plato onwards, but some scholars overlook or dismiss the events around them – or are incapable of providing the context to explain these events. Having built up and sold a public relations consultancy business, Thompson understands the world he writes about.

In parallel, he describes ‘PR’s capture of politics’ which reached its high point during the 2010-2015 coalition government in the UK (both prime minister David Cameron and deputy prime minister Nick Clegg had backgrounds in corporate public relations and public affairs).

Citing another interesting book in the same Routledge New Directions series, Thompson observes that peak PR period ‘found expression in the academic sphere with Robert Brown’s (2014) book The Public Relations of Everything, in which he argued that until around 2010, “dominant theorists had tailored a suit much too small for the realities of PR.”

Thompson provides an economic perspective on the way classical public relations – the world we both worked in – operated. He describes how public relations consultants added value and made money.

‘The classical form of public relations was partly about professional skills in the area of written, spoken and sometimes visual communications but was also about relationships. The point of value came from the quality of relationships and trust that existed with a tightly held circle of editors and journalists, in which economic rents (in the form of fees) were charged to clients, on the basis of access to media and the resulting press coverage.’

‘In mainstream PR practice, social media is not about business as usual, supporting a routine PR system of announcements, launches and good news stories in the commercial world.’

One driver is convergence – of media and of marketing services. This leads to some novel intersections, and Thompson explores how law firm Schillings promotes itself in language familiar to public relations consultancies, offering to “find the fix” and “control the crisis”, “because privacy is vulnerable and reputations are under attack.”

This is an academic book, priced for university libraries rather than the general reader, but Thompson draws widely on politics and popular culture for his examples.

Politics provides the most fertile context. The move from classical to post-classical public relations mirrors the move in politics from the pursuit of consensus to a populist politics of conflict, or dissensus.

‘The template for delivery of the post-truth style of state PR has been developed most completely in Russia.’ Citing Russia’s response to the attempted assassination by novichok in Salisbury, Thompson writes ‘Russia’s confidence in its post-truth PR approach is so strong that it ignores the communicative norms of international relations and deploys it even in incidents where video evidence is available that contradicts its case.’

The relationship between emotion and algorithms is an important one. As Thompson writes when reflecting on the success of the Brexit campaign for Britain to leave the European Union: ‘Social media rewards engagement and digital campaign planners were swift to recognise that emotions in general and anger in particular, are potent accelerators of engagement.’

A useful case study presented here – particularly in the context of the current global coronavirus outbreak – is the anti-vaccination groundswell. ‘The continued prominence of the anti-vax movement is an example of a cultural trend of promoting ignorance in a strategic way as a virtue that empowers “ordinary people”… The anti-vaxxer example, which dates back 20 years, is an enduring example of the contagious nature of misinformation.’

This book presents an important argument that deserves wide dissemination and discussion.

I wonder if the author shares any of my generational guilt. We benefited from relatively easy money by specialising in technology sector public relations consultancy in the era of classical PR. Now we both teach students knowing that they do have great opportunities but will experience much less certainty and security in the post-classical age of public relations.

One question left underexplored in this wide-ranging book is what this means for professional ethics in a world where the winners are so often the least scrupulous. The only lesson to be drawn from the very public failures of Bell Pottinger and Cambridge Analytica, the author suggests, is ‘don’t get caught.’

It’s a strange form of reassurance, but Thompson restates the inherent fakeness of public relations in his conclusion. ‘PR people create communications materials, and then operate as representatives of a third party on whose behalf they are deployed, and so some degree of inauthenticity has always been present in PR work.’ This may dilute the clear distinction between the classical and post-classical eras, but I find it more credible than the golden age theory through which some scholars argue that public relations began as a pure and perfect discipline, only to become sullied over time.