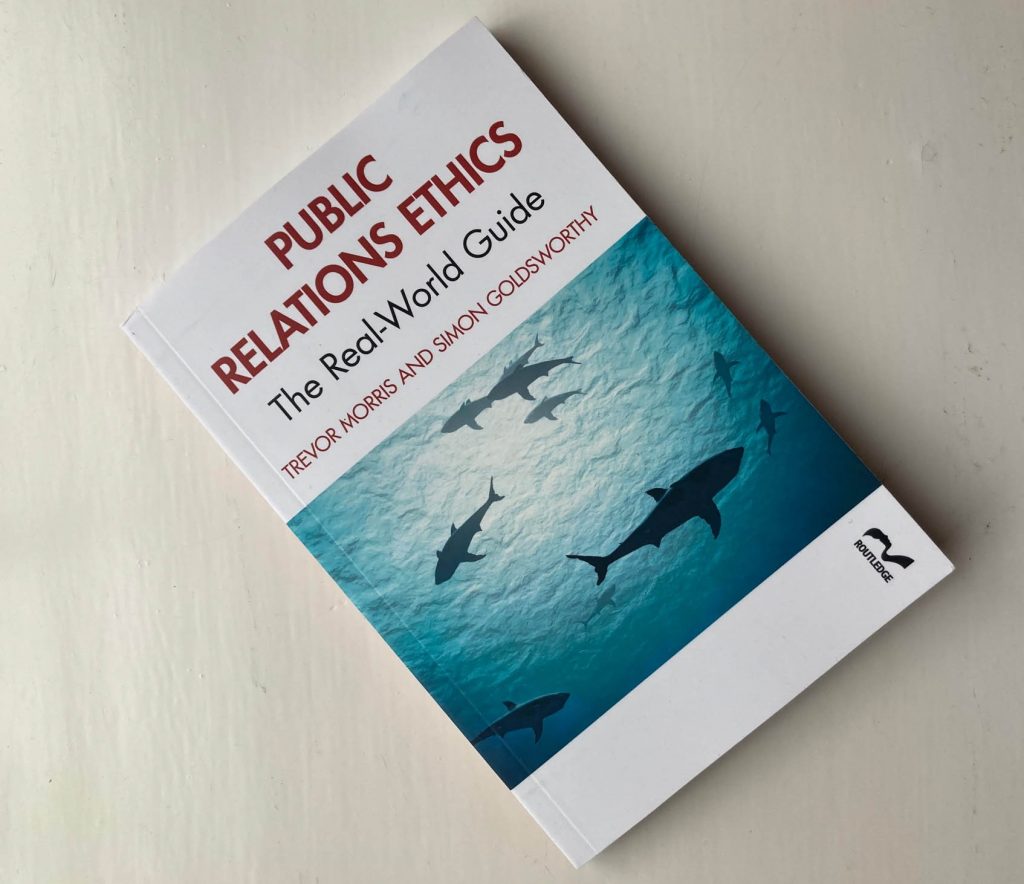 The approach is clear from the subtitle: theirs is not an abstract, philosophical approach, and they have little time for discussions of deontology or utilitarianism – these concepts are given just a page each.

Previous academic contributions to this field are only fleetingly mentioned. Morris and Goldsworthy would no doubt contrast their realism with the perceived idealism of many academic texts.

So here we are in the murky waters of real-world ethics. And no case study is more central to this than the events leading to the collapse of Bell Pottinger. The authors present the case made by the PRCA that this was a clearcut breach of its code and that Bell Pottinger’s expulsion from the trade association, which precipitated its collapse, shows that such codes have teeth and that the industry is principled.

Yet they also explore counter-narratives, describing this as ‘The Strange Case of Bell Pottinger’s Downfall’. The collapse led to many job losses and longer-term reputational harm to many individuals who had no involvement in Bell Pottinger’s questionable work in South Africa. And wasn’t the enthusiasm to expel this big beast consultancy an easy choice for its rivals and competitors?

And what of the highly questionable role of the late Tim Bell? The co-founder of the agency, who had helped win the contentious client in South Africa, had only recently left in acrimonious circumstances and was clearly embittered with its present management. Was his notorious car-crash Newsnight interview a wilful attempt at sabotage rather than an example of drunken arrogance?

What are we to make of Tim Bell’s legacy? Had he not succeeded by playing by his own rules, and had he not always rejected the professional body requirement to disclose who he worked for, arguing that even repressive dictators deserved international representation? So how come Bell Pottinger had been accepted into PRCA membership in the first place?

In this world, the reputation problem faced by public relations (many have pointed to the irony of this statement) is caused in large part by its relationship with journalism (‘it can be likened to a long-standing but difficult marriage’). Yet ‘as the people who produce media content, they have the last word.’

There’s also the sense of moral superiority: journalists see themselves as independent seekers after truth, and they regard public relations practitioners as morally-compromised advocates.

Then there’s the contrast with the highly-visible, transparent and tightly-regulated world of advertising. By operating in the shadows, public relations has largely avoided external regulation – but this has not helped the impression that it’s a murky activity.

The ideas presented here are rarely new. They have been articulated by these authors from their 2008 book Public Relations – A Persuasive Industry? onwards. Nor are they as original as the authors imply: Morris and Goldsworthy argue that there is no distinction between propaganda and public relations since both practices are essentially amoral. That’s effectively the argument long made by Kevin Moloney that public relations is a form of weak propaganda.

Yet there is a freshness to their approach: they look at the Cambridge Analytica scandal as explored in the documentary The Great Hack and take this in an unexpected direction. Don’t all political campaigns seek to win? Wasn’t Barack Obama elected in 2008 thanks to an earlier example of Facebook campaigning?

These authors write with uncommon flair and this text follows their earlier books in being entertaining and provocative. The global perspective is also very useful as it introduces different cultures and customs.

Their summary of public relations academic debates around the ‘two-way symmetric model’ is well judged. Then comes the sting: their objection to fashionable critical perspectives that focus on ‘perceived power imbalances, inequality, feminism and issues around diversity, identity and inclusion’ is that these academics are ‘simply talking to themselves and losing touch with the realities of the industry they are supposed to study.’ Back to reality, then…

The authors describe public relations as an occupation with ‘aspirations to be considered a profession.’ They present the counter-arguments to the narrative that public relations should seek full professional status. Among these are the reduced diversity of background and experience that this might result in, and the comparison with the creative industries where people are often highly skilled but rarely seek professional status. The argument was made in a chapter title in the same authors’ first book: ‘Professional, but never a profession’.

The authors are keen to expose what they perceive as a left-liberal consensus among public relations practitioners and authors. Sometimes their provocation raises interesting questions, but often it feels like they’re waging old right-left battles that mean little in the twenty-first century.

Is it true that people tread softly around China because it’s a communist country, while being quick to find fault with autocracies in the Middle East?

They’re right to argue that some of those who criticise public relations do so because of its associations with large, globalised business. These critics are opposed to capitalism (a way to identify them is in their frequent use of ‘neoliberalism’ as a description of what’s wrong with the world). Yet, like the left-right debates of old, this one has also moved on. While governments come and go in democracies – and policies change: consider the US decisions on the Paris Agreement on climate change – businesses are proving steadier and more far-sighted in their planning. Could talk of CSR and ESG be more than just talk? Could it lead to change? Is there a purpose behind all the talk of purpose?

Morris and Goldsworthy explore the ethics of capitalism and consumption by turning their spotlight on the fashion industry. They don’t offer ready answers, but their questions would make for a lively university seminar (which is presumably where it came from).

Elsewhere they address the ethics of media relations; of lobbying; and touch on healthcare public relations, financial public relations, charity comms and internal communication (presented here as a purer form of unmediated propaganda).

Practitioners and students will find this an accessible book. Educators will find plenty of discussion points and classroom exercises. Scholars should look away.

Is anyone working on a full-length biography of Tim Bell (his ghost-written memoir tells only some of the story)? A well-researched biography might reveal more about real-world ethics in advertising, public relations and political communication than is possible in one short book.