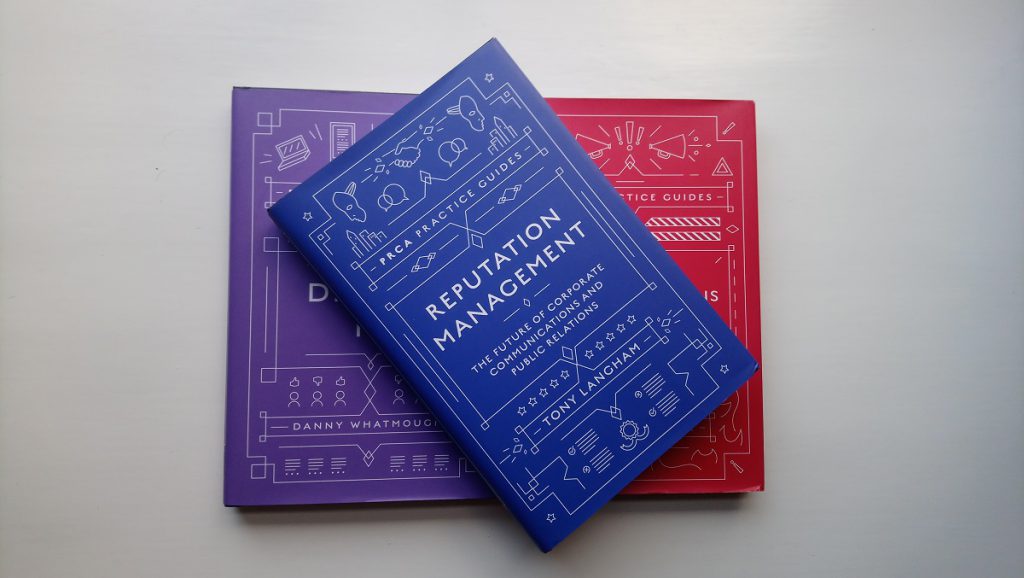 The latest publication in the PRCA Practice Guides series is the one I’d most been looking forward to.

And two differences are immediately apparent. This is a fatter book at 269 pages than the recently-published Digital PR (172) or Crisis Communications Management (134). And it’s been ‘written and curated by’ Tony Langham, so we’re gaining more than just one author’s wisdom and perspective here. We also have models and diagrams, absent from this book’s stablemates.

Most important, for an industry that claims to be ‘all about reputation’, my bookshelf is surprisingly thin in this area (several established authors in this emerging field contributed to this text). So this is a welcome and eagerly anticipated new book.

Langham avoids purely academic debates around definitions when discussing the overlapping concepts of image, brand and reputation on the grounds that ‘we all understand implicitly what this is – that seemingly indefinable quality that makes success more likely. That magic ingredient is best described as reputation.’

It starts with culture (‘how an organisation behaves’). ‘This explains why the fastest growing area of the PR industry revolves around culture and employee engagement. It’s why almost every organisation in the world is striving to define its purpose, its reason for existing.’

This leads on to a discussion of the future of public relations. Langham sees a split. ‘At one extreme, former PR practitioners and consultancies are heavily focused on marrying creativity with digital know-how and have become ‘integrated markers’… At the other extreme of former PR… leading practitioners are focused on the key decision makers in the Boardroom and Government and describe their role as strategic, corporate or financial communications; or public affairs or PR.’

‘In future, these disciplines of strategic, corporate and financial communications and public affairs and PR will be absorbed within the more integral function of reputation management.’

There are challenges, though. John Doorley, writing here, notes that most large corporations have risk managers addressing financial and legal risks – but rarely focusing on reputational risks. Crisis management is already big business – so why not reputation management?

One challenge for those in public relations and communication is that most problems are related to performance, behaviour or identity – and cannot be fixed by communication. ‘If communication did not cause the problem, it cannot fix it.’ Apologising when the organisation or individual did nothing wrong – as advised by many crisis managers – ‘may stop the bleeding, but it is untruthful and bad behaviour. It will, therefore, harm reputation over the long term.’

The examples, testimonies and perspectives given here are dizzying: we have James Bond as an example of longevity; Goodwood exemplifying perfectionism; Unilever advocating purpose alongside profit; Money Saving Expert Martin Lewis standing for trustworthiness; a psychologist explaining why our brains try to protect us from admitting wrongdoing; a talent agency talking about its clients’ careers; a reflection on China’s international reputation; a city journalist wondering why more CEOs can’t just tell the truth and sound like human beings; a lawyer’s perspective on the tussle between privacy and free speech. There’s also 39 new case studies from around the world.

I only know Tony Langham by reputation (how appropriate) – but can see from this book how he exemplifies all that’s admirable about the best people in our business. They demonstrate curiosity and connectedness – with a lack of vanity and pomposity. They are more natural as chairpeople than chief executives.

To use another metaphor, Langham has conducted an orchestra of different sounds into a coherent symphony on the theme of reputation – with few discordant notes.

I’d have welcomed even more on the advisory role. If there’s consensus that corporate reputation is owned by the CEO, then what’s the role of the reputation manager? Late in the book Paul Holmes addresses this question. He argues that we have been hindered by too narrow a definition of the role of corporate communication.

‘The twenty-first century reputation advisor will need to approach his or her responsibility more assertively, more wisely and more courageously. First and foremost, reputation consultants need to ensure that they are involved in making decisions, not just communicating them…. Second, reputation counsellors need to focus on corporate values. Most organisations today claim to be guided by values that go beyond the basics of making a good product and selling it at a fair price. Few live those values in a consistent way.’

There are so many interesting things in this valuable book that I don’t want you to miss the message about the direction of public relations. So here it is again: ‘There need only be two core functions: integrated marketing and reputation management.’ Which one best describes your future?