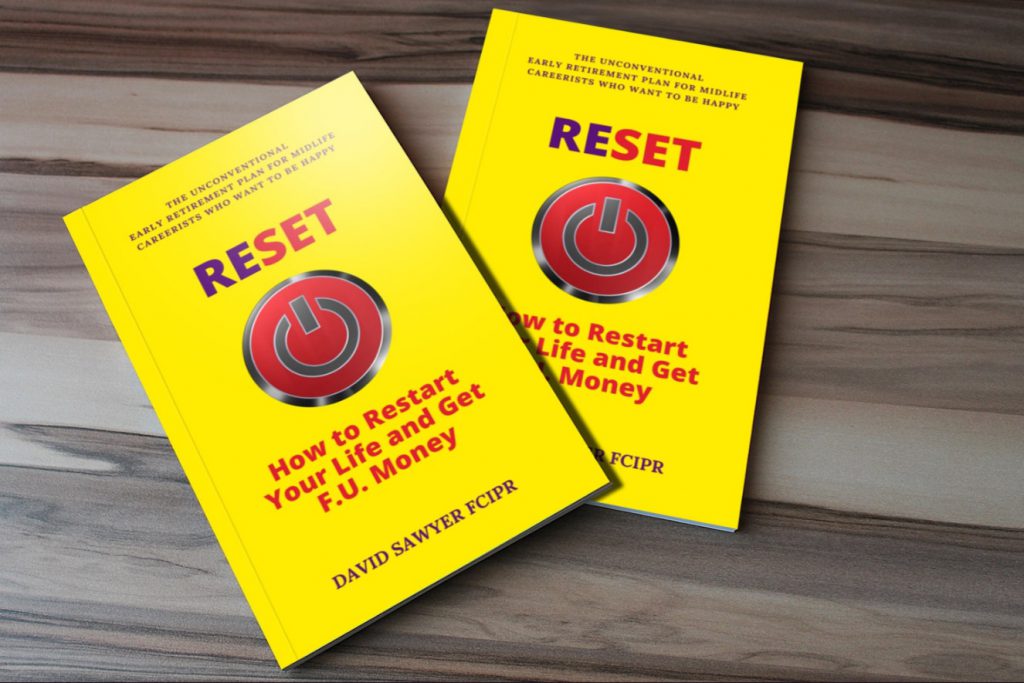 RESET: How to Restart Your Life and get F.U. Money
David Sawyer FCIPR
2018, Zude PR Ltd

Dude from Zude is no ordinary bloke

People working in public relations have an undeserved reputation for being lightweight and second-rate. This goes back a long way. John Betjeman depicts someone spivvy and evasive in his poem The Executive (‘I’m partly a liaison man, and partly P.R.O.’).

We need more memoirs and biographies (and obituaries) to set the record straight.

In their absence, this self-published book by a Glasgow-based PR practitioner is an eye opener. Sawyer presents himself as everyman, and claims to be writing for ‘every middle-aged, middle-class midlifer’.

He’s put himself through a six year programme to reset his life with the goal of early retirement and financial independence. ‘I have no God-given talents. Anything I’ve achieved has come through hard work.’ (Yet in his middle years he’s run a marathon in 2 hours 40 minutes – he’s that kind of guy.)

‘I was rubbish at running at school, didn’t have a clue what I wanted to do when I left university, fell into PR, shambled into digital marketing.’

So how did he change his life? What can he teach us?

‘A lost generation of professionals – sandwiched between the devil-may-care attitude of the millennials and the final salary scheme of the baby boomers – is stumbling through life unhappy, unhealthy and overwrought.’

You may be wondering what the connection is to public relations. Sawyer ran a big city office of an international public relations consultancy before setting up on his own.

‘In January 2014, after 17 years in corporate life, I walked through my office door for the last time. This was a wrench, to put it mildly. Overnight I went from 250 emails and 50 questions a day to nowt. I was lost.’

This isn’t a book about work, but rather a book about those caught-in-the-middle trying to balance life, work and money while keeping an eye on the meaning of it all.

It’s a very well written book – though in the breezy style of a US self-help manual (Sawyer admits to having read many of these). It’s a book about the meaning of life; about angst and the search for purpose.

I may scoff at the idea of self-help manuals, but all he’s doing is providing external advice in the way that public relations practitioners advise organisations. So one way to view this book is as a guide to creating a strategic plan for the rest of our lives.

It starts with future-proofing your career. Starting up on your own may sound risky, but it’s no longer a safe choice to choose a salary. Your fate is not in your own hands.

I was unsure about reviewing a book that wasn’t about public relations – though the author assured me that there’s plenty of PR in here. He describes the shift to digital, presenting it as a threat to those familiar with the world of media relations and crisis management.

‘Not having to reach people through the filter of press and television should be liberating for PRs who are, at their core, frustrated writers (just ask the late great Terry Pratchett). Digital should be a chance to learn new skills, a chance to write creatively, not in the style of a press release.’

What follows is a 25-point (PR) plan for a mid-career professional to extend their influence and ensure longevity.

It starts with advice on technology suitable for nomadic workers and moves on to reading habits. He reads blogs, but recommends something else:

‘Books, though, are the writer’s best shot: something they’ll be proud of for the rest of their lives, something they’ve edited and re-edited to ensure a smooth read. If I think someone’s worldview is worth exploring, that what they have to say is consistently valuable, I buy their book. The best are timeless and you can refer to them repeatedly.’

Leading on from this is writing. ‘To be a good writer you have to read.’

‘Writing a blog is the single best thing you can do to teach yourself how to rank highly on search engines. But don’t write with SEO in mind. Share your best thoughts with the world and build a community around them: you’re writing for readers, not Google.’

There’s a useful chapter on digital decluttering. ‘If you’re checking your smartphone every five minutes, there’s a void in your life.’ This is a preamble to a chapter on decluttering your house. I enjoyed the detour into minimalism, because the focus is on less rather than more (the stated purpose of the book, remember, is more time and more money).

The section on financial independence (FI) is very American, as Sawyer has absorbed concepts and lessons from US advisers and bloggers. The advice is designed to help you become your own financial adviser.

‘There is only one true measure of personal wealth. It’s not how big a house you’ve got, what car you drive, or what salary you’re on. The only measure you should be interested in is your net worth.’

The book ends with a list of tips, and some dos and don’ts for living a good life. It’s impressive. It’s exhausting. Sawyer suggests he’s everyman. I think he’s superman.

We’ve strayed from our normal topic, so let’s end with his summary of working in public relations.

‘Being a public relations practitioner is exacting, given it ain’t life and death. It ranks in the top ten of the world’s most stressful jobs. This is because, in the words of a friend of mine, PRs are always in the middle of a “shit sandwich”.’

Now, what was that about public relations being for lightweights?

Note: the review copy was a pre-publication PDF supplied by the author. The book is available in print and on Kindle from Amazon and you can read more about it on the author’s website.