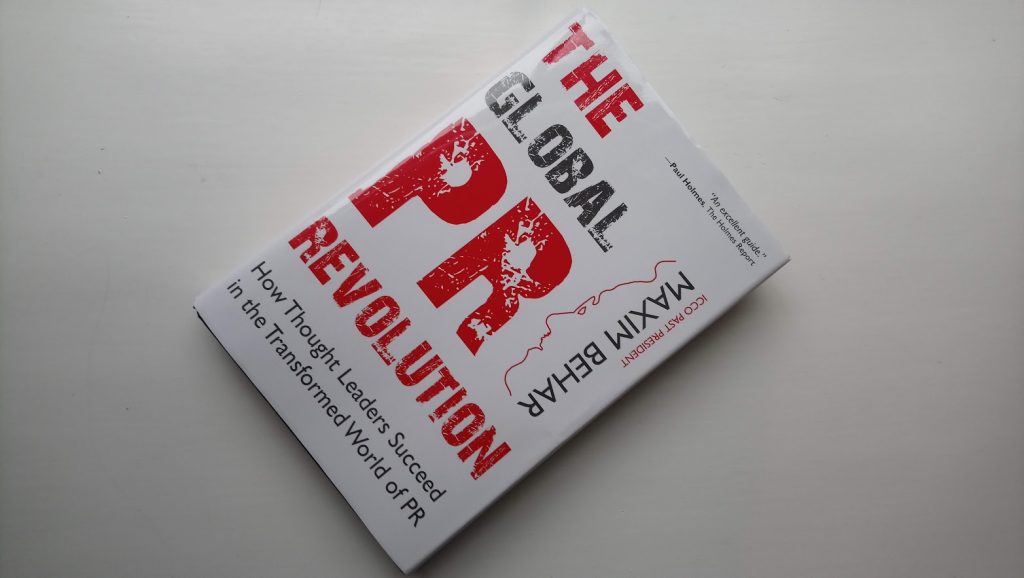 The Global PR Revolution: How Thought Leaders Succeed in the Transformed World of PR
By Maxim Behar
Allworth Press, 2019, 297 pages

There’s a place for memoir alongside historical accounts, academic monographs and how-to guides. Memoir reflects the lived experience and, hopefully, allows a ‘warts and all’ reflection to set alongside idealised or over-generalised accounts of public relations practice.

But there are risks in the genre. They’re so often used for aggrandisement and even for score settling. They’re not often well written (Tim Bell’s memoirs were ghost written). They usually recount the victorious war stories of great white men. These are the trophy hunters and explorers of the first century of public relations when there were easy victories to be won, new lands to be conquered and rich spoils to be grabbed.

Max Behar’s account is a mix of all these things. Where it’s distinctive is that he’s from Bulgaria and so his life experience has spanned loyalty to communism and advocacy of capitalism. But he’s also less interested in the past than in the future of public relations.

Mostly, he’s the bluff practitioner who tells it as he sees it. ‘My current definition of PR’, he writes, ‘is “telling the truth in a way that people understand’.”

Clearly, this takes journalistic instincts (as with so many of his generation, he started out in journalism). It also echoes McCann’s famous dictum about their advertising work: ‘the truth well told.’

Indeed, he set out to offer advertising services in post-communist Bulgaria before changing direction and becoming a public relations specialist.

Behar’s great insight – and business gut instinct – has been to anticipate the merging of advertising, public relations and digital.

He argues that public relations and advertising have been waging an undeclared war and that this war will be in full-swing in the next five years. ‘They are fighting to keep their clients and we are fighting to protect our territory, which is called “content”.’

Yet the merger is inevitable, and it will involve losses. ‘My forecast is that what will drop out of PR will be what is called media relations. There simply isn’t any need for media relations anymore, because we own media. The advertising business will probably suffer more losses – only the creative departments will remain, and to some extent the copywriting departments.’

‘Many things will disappear from each of the three main communications industries so that a new industry can be born. I don’t know what it will be called. It could be named “social relations”.’

As you can tell from this quotation, Behar is an advocate of endism. He champions the approach that says the press release is dying. More contentiously, he once spoke to a crowd of public affairs practitioners in Brussels and was surprised that they seemed gloomy on hearing his prediction of the imminent death of lobbying.

Media relations belongs to the past, but not our future. By contrast, he argues, reputation management ‘is ever more important for the PR industry.’

More challengingly, ‘we, the PR consultants, have in essence turned from consultants into decision-makers, because now decisions have to be made instantaneously… Our industry is one of leadership, futuristic visionaries and believers.’

‘The power of the PR expert no longer lies in consultation. The expertise is now behind the keyboard.’

This book argues that we’re experiencing ‘the first true revolution in the PR business ever since its inception.’ Other experts from all corners of the globe are invited to give their opinions on whether this is a true revolution or a process of evolution. Opinion is divided, so let me cite the counter-argument as presented in this book by Philippe Borremans, once of IBM.

Do you consider the changes as revolutionary?

‘No, these changes have been under way for more than ten years. The whole “social media revolution” started with blogs in the early 2000s, and we’re now almost twenty years later. Rather, I would call it a very slow evolution on the part of the PR industry and its clients. The general public is adapting much faster than the industry.’

The author recognises the range of expert opinion he received on his question, but rejects any objections to his central argument. ‘I don’t believe that my thesis about the global PR revolution has any weak links that can be attacked.’

It’s frustrating that more people seem willing to write books than to read them (Behar mentions several of his own books in this text, but cites no other authors). He appears unaware that this revolution-evolution debate is already well established in the literature. Australian scholar Jim Macnamara (previously a successful public relations consultant) called his 2010 book on social media The 21st Century Media (R)evolution to reflect this very debate. Macamara is very much better read and thus more receptive to new ideas.

By accident, Behar and Macnamara seem agreed on one thing. Where the latter prefers ‘public communication’ to ‘public relations’, Behar alights on the same formula for describing the business resulting from the merger of advertising, public relations and digital.

Behar talks about total transparency (TT). This allows him to revive his definition of business ethics formulated back in 2001: ‘making a profit in a transparent way.’ He’s an optimist: ‘the rise of transparency caused by the social media revolution is rapidly building to a far better world.’ I too would have made this argument in 2009, but the rise of fake news, bots, trolling and social media-induced sleeplessness and anxiety make it hard to sustain in 2019.

Curiously, in his top ten list of drivers of the global PR revolution Behar cites education:  ‘we must bridge the gap between theory and practice; we must address the overwhelming prevalence of the latter over the former.’ I applaud this sentiment, so it’s all the more surprising that his book is all about the lived, not the learned, experience.

This is an optimistic book. But is this well-founded? One of his 100 experts, Stuart Bruce, sees the dangers in triumphalism.

Behar has a successful second career in public relations. But if he were starting out today, would this pattern necessarily repeat itself? He’s certainly adapted well to change (one of his ten success factors), but what about the luck of having been in the right place at the right time?

He’s generous with his wisdom in this book, but not all readers will share his cheerful optimism.