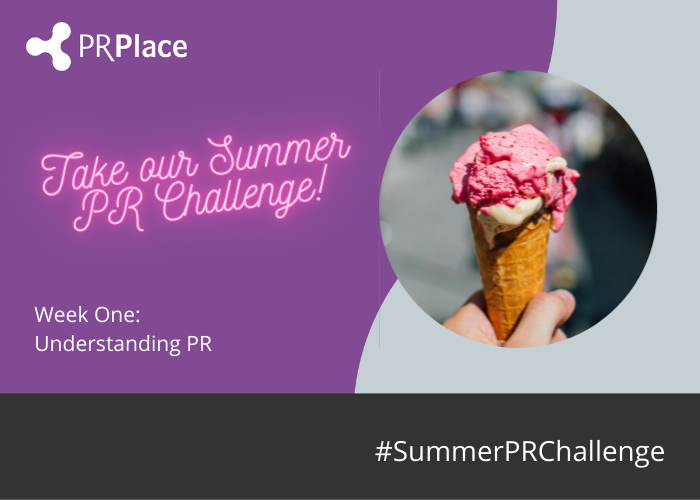 In our Summer PR Challenge, through August we’re giving you some ideas and some resources to help you get started – and get ahead – in public relations.

You may be a school leaver or graduate looking for work; you may be preparing to study in the autumn; you may already be in work – but looking to upskill. We hope to offer something for all of you.

This is a difficult time for job seekers; but the pandemic has also shown the value of public relations. Some sectors have been forced into hibernation, but all organisations have learned the importance of communicating with remote workforces, and that reputation never sleeps.

But what is public relations, and what skills and techniques does it involve? Our #summerPRchallenge guides you through the basics and encourages you to develop your own views.

Your starting challenge is to understand public relations as a promotional activity, as publicity. In this context, public relations helps get things known. The resulting awareness is considered a necessary starting point for behaviour change – whether it’s to get someone to try something, to buy something or to quit something,

Recently, my social media feeds were full of talk of Taylor Swift’s new album. Some of this may have involved genuine fans expressing their passion for her music, but the barrage of publicity through multiple channels suggests coordinated launch activity. In other words, planned public relations.

Challenge #1: Check your social media feeds and your favourite news sites. What examples can you find of coordinated promotional activity?

There was some criticism of the government’s decision to reintroduce tightened restrictions on some areas of the north of England. The announcement was made late last Friday – on Twitter – then widely reported in the national and regional news media. How well do you think this announcement was handled? What could have been done differently?

It’s a useful exercise to identify examples of public relations as publicity, and to be able to critique them.

This emphasis on publicity raises the question of stunts. Is there still a place for publicity stunts? Do they work? Are they ethical? Note how experienced practitioner Hamish Thompson emphasises the low cost and high impact of the succesful stunt. 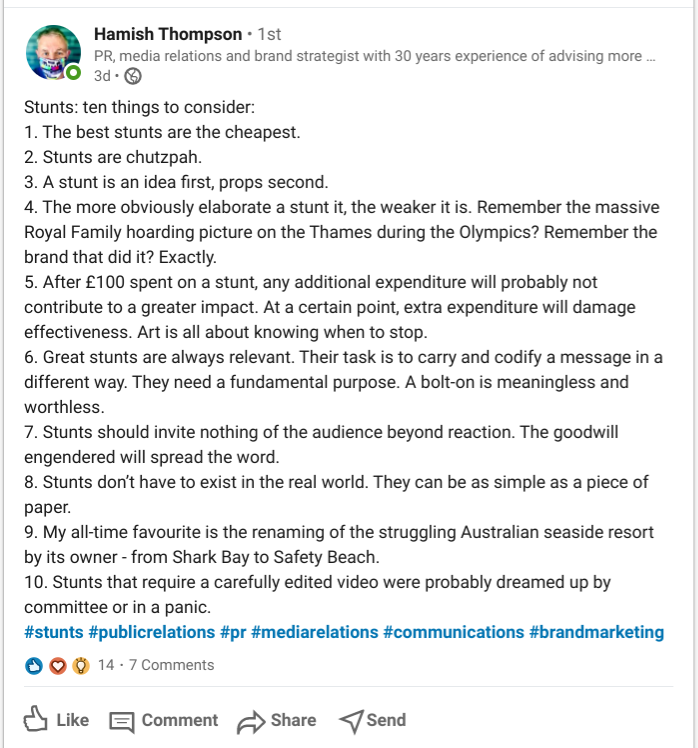 If we accept publicity as a useful starting point for understanding public relations (some academics place publicity firmly in its past), you now need to consider these two questions.

Yet one distinction remains. Most advertising practitioners work in agencies, whereas in public relations, most people work in-house for one organisation. Public relations agencies/consultancies are very visible on social media and widely reported in the trade press, which gives the impression that they are the heart-and-soul of the business. If this is the area you’d like to work in, then it’s easy to find and follow consultants and consultancies on social media. But it’s a good challenge for beginners to balance this out by developing contacts with in-house practitioners, who may be less visible on social media.

The answer is there’s more to public relations than publicity, but that takes us beyond an introductory discussion.

The term public relations is widely misunderstood. Many take it to mean press relations; others view it as a part of marketing (the last of the four Ps: product, price, place, promotion). Some take it to refer only to external relationships with the media and customers, and view internal communication, public affairs, investor relations etc as separate practices. That’s why many prefer to talk about corporate communication (embracing all publics, market and non-market); or marketing communication (the integrated approach to all market-focused activity).

If we accept press relations / media relations as a distinctive and important public relations activity, then what is its future given the decline in traditional media and the rise of Google and social media?

The rise of digital and social media has led to a blurring of the old distinction between paid media (advertising) and earned media (public relations). Many now cite the PESO (paid-earned-shared-owned) model and argue for a multi-channel approach in order to achieve greater authority (or reputation) for the brand or organisation.

Your challenge #2. If public relations seems too vague and ill-defined, then why not try replacing it with one word?

Here are some widely-used contenders:

Each has its advocates.

Are these words better than the one we started this article with: publicity?

The danger is that we repeat the trap many of us fell into in the last century, confusing means with ends. Our method (ie means) might have involved media relations. But that’s a process, not an end result (unless the desired outcome from media relations was simply to establish and maintain better relationships with journalists; usually it was to use the media publicity to achieve increased sales, say, or a boost to the share price).

The same can be said about communication: it’s a process, not a desired outcome. It describes what we do, but not why we do it.

So a fuller understanding of public relations requires you to explore what its purpose is. (In Week Four we’ll return to a discussion of how to count – and put a value on – public relations.)

Each week on Friday, we provide a digest of conversations from public relations practitioners in our #ThisWeekinPR feature. Scan this to gain a overview of topics being discussed, and the variety of work being done under the name of ‘public relations’. You can also use this feature to discover some people to follow on social media. Some of them share job vacancies and other opportunities online. You can learn from all of them.

Your challenge #3: Follow ten new people on social media who can help you gain a more sophisticated understanding of public relations.