University fees for undergraduates trebled in 2012. There has been more money in higher education, resulting in new buildings – and some spectacular pay rises for university bosses.

Here’s the problem. Rather than fees and money leading to better teaching, I fear the opposite has happened.

If you know that your ranking, your department and ultimately your job depends on student satisfaction, are you going to do anything to jeopardise this?

These are rhetorical questions because everyone knows what has happened. There has been widespread grade inflation. University lecturers have to direct all their efforts towards assignments (as if this were the end purpose of education).

Where is the space of innovation, for risk taking and experimentation?

By sharing my own examples of risky teaching, I hope to encourage other educators (and their students) to come forward with their own experiences. I don’t think we should be ashamed to discuss failure, as it’s a necessary part of a culture of innovation. But I’m very happy to allow you to share your successes.

My examples are of two classes that used a Twitter hashtag. One was broadly successful, the other much less so. You’re welcome to learn from my experience – and I’d love to hear yours.

It was late November 2012. The final class in the first semester for first year students. I wanted to combine a party atmosphere with lessons in communicating on social media. So we held a silent party, communicating via the hashtag #tweetnotspeak. 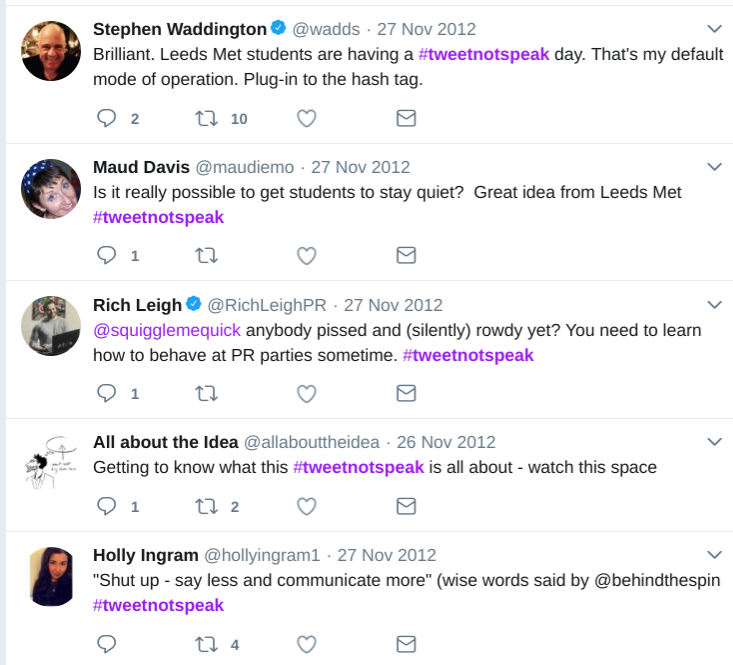 We had a class member taking photographs of the group with stickers over their mouths to tell the story visually. This stunt was only a partial success as we were also using our mouths to eat and drink.

The main success was that we opened up the classroom to visitors from outside, and there were some good exchanges with industry players. One agency in the city tweeted the offer of work experience placements, impressed as they were by the creativity on display.

The success came from including outsiders in our classroom. Could it happen again? Yes, but we gained easy attention by this being a much less common approach to education than it would be years later.

It was not a complete success, though. I recall one diligent class member, from one of the Gulf states, who was not on Twitter and who seemed bewildered by the unconventional experience.

In my defence, we’d created the event collaboratively over the previous few weeks, so it was not sprung on the class unannounced. But social media usage is not universal, and I should have worked harder to avoid anyone feeling excluded.

This class contributed to me winning a university teaching award, nominated by students.

Armed with this broadly positive experience, I try again from time to time. Here’s one that didn’t go to plan.

In 2015, then at a different university, I decided to involve a guest in our class using a Twitter chat format. This time, they were second years studying a digital module, so the medium was more suitable to the message.

The guest was well chosen. Rich Leigh is an innovator who has built up his own business, built and sold the prexamples.com site and who went on to write a well received book: Myths of PR.

Our Twitter chat took the form of a Q&A session using the #askPRpro hashtag (I’m impressed that years later I’m able to rediscover the thread by a Twitter search).

Surely this had all the makings of a successful class? What went wrong?

I’d not thought through the format. If you have twelve or more people asking questions of just one, then there’s a bottleneck in the event. Successful Twitter chats pre-release their questions and try to move the agenda on in order to manage what can be a chaotic clamour.

Ours was just chaos. All the students wanted to have their say but their questions got lost in the thread as Rich Leigh gamely tried to keep up and make sense of the noise.

I’d ignored the principle of good teaching that it’s the students who need to do the work. Instead, we created a lot of work for our guest, and left students with too little to do.

The idea wasn’t wrong, but I’d not thought through the format. That’s what can happen when you experiment.

I’ve picked those two examples because they are directly comparable. I also have some experience of speed blogging contests that worked, and those that didn’t.

Education needs some element of engagement: if it’s all pre-scripted and bullet pointed, why bother turning up to class?

To achieve engagement, I think you have to be willing to take some risks (even in public). The classroom should open up a subject and allow questions to be asked. There should be some answers too, even if they’re not always the ones you anticipated.