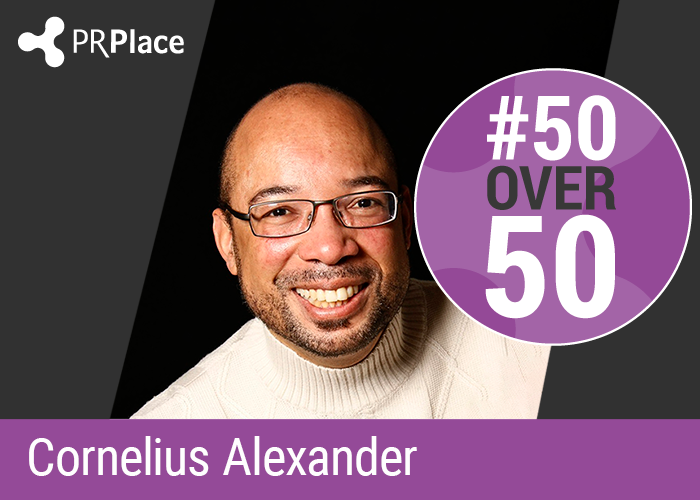 At the age of 48 Cornelius Alexander was told by a recruiter “If you don’t get a job in the next few months, you won’t work in PR again.” Well, how wrong that recruiter was as Cornelius is now running communication for the Office of the Immigration Services Commissioner.

We met when he studied the CIPR PR Diploma with us at PR Academy.

It is this sort of comment that helped to inspire our #50Over50 initiative because the diversity in PR agenda should be as much about age as anything else. Organisations and clients benefit.

As Cornelius said to me: “Organisations need a few silverbacks.” His point was that with age comes experience and with that experience comes the ability to keep it calm and in perspective.

If anyone gets the diversity agenda, it’s Cornelius. He sort of stumbled into when on a busman’s holiday attending a PR conference in Vancouver. He discovered that the Global Alliance was also having its conference there so he went along. Paul Mylrea who was the CIPR President-elect at the time was there – they had a connection from when Cornelius worked for the Mayor of London (Ken Livingstone at the time) and Paul was at Transport for London.

Cornelius asked a few questions about global PR initiatives and once back in London Paul got him involved in a new CIPR initiative and Cornelius later found himself chair of the new Diversity Working Group.

Next year that group will be ten years old and Cornelius is still involved. “It has been an interesting journey. At the start, everyone was saying ‘diversity – nice to have but we haven’t got time and resources to do anything about it’. Well, that’s all changed.

But the work isn’t done until background, race isn’t news. The question is simply – are they doing good work? Where somebody comes from isn’t here or there.

“Organisations set themselves targets for getting things done by 2020 – so it should be a landmark year. It will be interesting to see how much has changed in those ten years.

“Any team needs to be multi-layered. The days of saying ‘I can do it with a bunch of white guys who went to Oxbridge, so why wouldn’t I?’ are over.

With maturity comes an historical perspective on events.

Cornelius started out as a journalist in North London in the 80s. It was a fantastic time to be a journalist. His patch included what was dubbed the “loony left” borough of Brent, and Westminster under the control of Lady Porter at the time of the “homes for votes” scandal.

From there, Cornelius did the same as many of us who worked in journalism at the time and went into press office work because it was much better paid!

His first job was as a press officer at Scotland Yard and that started his communication career in the public sector. “Telling people what is being done in their name, with their money is an important part of democracy,” he says.

He had something of a baptism of fire. As part of his training, it was suggested that he do a Saturday shift to see how the Met monitored and dealt with marches and public order. A march was planned for that day but it wasn’t expected to be a big issue. However, that march turned into the Poll Tax riot. It was just Cornelius and one other press officer on duty and it turned out to be a much longer shift than the 10-4pm that was planned!

That story brought back memories for me too, I was working on my local paper at the same time and covered the Poll Tax protest in Salisbury, Wiltshire (I hesitate to call it a riot – this was Salisbury after all, although I did get hit by a flying egg!).

As Cornelius says, our marches today are polite by comparison.