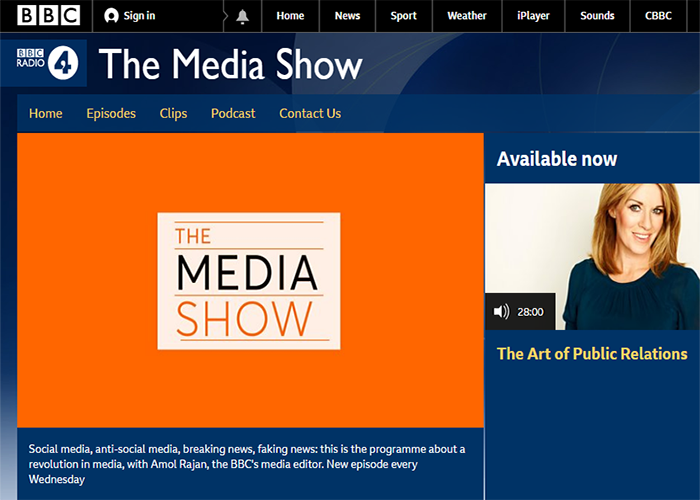 Last week, The Media Show on BBC Radio 4 was devoted to ‘the art of public relations’. This week, there has been a strong reaction from the CIPR and from the PRCA to the misleading representation of the industry.

For those who didn’t listen, or who don’t get what the fuss is about, here’s my analysis.

First, you need to understand how the media world operated in the twentieth century, which still informs the thinking of most of those aged 40 and above. That includes many editors and senior journalists as well as public relations practitioners and academics.

The twentieth century represented the peak age for broadcast media. Some of us can recall when there were only three broadcast television channels (BBC One, BBC Two and ITV; Channel 4 started in 1982). The late twentieth century was also a golden age for national newspapers, one of which even claimed to have swung the result of the 1992 general election in favour of John Major’s Conservative Party.

In that pre-internet world, journalists acted as powerful gatekeepers of what appeared in the public domain.

So, if you were a journalist, your dealings with public relations people revolved around their attempts to persuade you of the newsworthiness of PR-driven stories, or the playing down of the significance of potentially damaging stories.

You needed the access that PR people could provide to information, resources and senior executives, but you knew that there was a tension between your interpretation of the news and the ‘spin’ put on it by PR practitioners. This tension was often represented as a metaphor: journalists saw themselves as the people shedding light on issues and events while PR was seen as the ‘dark side’ in which propagandists spread a biased version of the news – or even downright lies.

In this manichean struggle between good and evil, there was a convenient figure who seemed to confirm all that was bad about PR.

The best-known practitioner at the end of the last century was the late Max Clifford, famous for concocting tabloid tales about his celebrity and entertainment industry clients (“Freddie Starr Ate My Hamster”) or for keeping their scandals and secrets out of the press.

Max Clifford seemed to confirm all that was bad about PR. He was manipulative, controlling (his conviction was for historic sex offences against women and girls), deceitful – and rich and powerful. He was frequently interviewed by journalists who described him as a ‘PR guru’, and the publicity helped reinforce his own image and enable him to further his own causes and charge high fees.

Max Clifford, let’s remember, was never representative of the wider public relations industry. He was not a PRCA or CIPR member subject to their codes of conduct, though he was proud to maintain his National Union of Journalists (NUJ) membership.

So in the late twentieth century, the restricted media landscape gave journalists a position of power as gatekeepers of information in the public domain. Journalists also have channels to shape the public consciousness and their view of public relations as manipulative media relations was confirmed by their experience of Max Clifford and of political ‘spin doctors’ such as New Labour’s Alastair Campbell.

That was then. Since the turn of the millennium public relations has continued to grow in terms of numbers employed while the media has lost its monopoly on news.

Only last week, we learned (from a national newspaper) that fewer and fewer White House media briefings are being given by President Trump’s spokesperson, while the president continues to lead public debate through his use of Twitter.

Here’s the blunt truth in this change. If public relations was as dependent on journalism as some like to imagine, then it would inevitably have followed the same decline in numbers and influence as has been experienced by the press and media in the internet age. When there’s no press, there’s no need for any press officers.

Surely, a curious journalist should have sought to explain this paradox? Or, to have taken note of the argument by John Lloyd and Laura Toogood of the Reuters Institute for the Study of Journalism in their 2014 book Journalism and PR: News, Media and Public Relations in the Digital Age.

Lloyd and Toogood’s thesis is that public relations has a more robust funding model in the digital age than does quality journalism.

This points to a second blunt truth. That we shouldn’t confuse means with ends. The meaning of media is – literally – means. A means for conveying ideas and messages.

The end result of public relations is not media relations, but public opinion. So it should be measured – and valued – by its ability to change attitudes and behaviour, and not by its ability to make stories appear in (or disappear from) the press.

The anger and frustration at the BBC Radio 4 programme is that it started from a twentieth century view of public relations as media publicity and invited on guests who were only too happy to bask in their reputation as master media managers, rather than those willing to challenge the premise and explain the bigger picture.

There’s one other thing you need to know. And that is the love-hate relationship journalists have with public relations.

Journalists are fascinated by an industry that seems to shadow their own activities and preoccupations. They love calling out its deceits and manipulations. But they also find the salaries, fees and career prospects very tempting. So there’s a one-way street between journalism and public relations that can largely be explained by economics. But there’s another explanation too.

Journalists are by training and instinct observers of events. They report what has happened. At some stage, there must come a desire to shape events. That’s what happened when Alastair Campbell left a newspaper job to champion the cause of New Labour. That’s what happens when reporters leave their jobs on local papers to work in local government or NHS comms. They are thinking beyond shaping headlines towards changing behaviours. Those working in the public and third sectors are driven by a belief that they can make a difference through communication.

Nor are those in the private sector blind to the public interest. They know that in the long term their organisations will only survive through the consent of a wide range of stakeholders including shareholders, governments, regulators, employees, trades unions, activists and local communities. Note that journalists are excluded from this list. So are customers, to emphasise that public relations is not exactly the same as marketing.

But the truth is often more complicated than the myth. Nor am I denying that public relations faces problems and is hard to distinguish from propaganda.

The issue of truth and lies is one that both industries share. Ethics should be a pressing concern for all who debate within the public sphere. Max Clifford was manipulative and deceitful, and he still casts a shadow over others working in public relations.

But let’s not forget that the Leveson Inquiry was into ‘the culture, practices and ethics of the British press’. Several journalists are now serving prison sentences as a result of the phone-hacking scandal. This has contributed to a loss of trust in journalism just when it’s been struggling with the loss of paying subscribers and advertising revenue, or questions about the viability of the licence fee that funds public service broadcasters led by the BBC.

If public relations practitioners were as blatant in their lies as some imagine, then surely at least as many would have been convicted (if only in the court of public opinion)?

That’s not to excuse bad practice. It’s to restate the facts and to emphasise that there’s more to public relations than media relations. In truth, there always was, but the distinction has become even greater with the emergence of digital and social media.

That’s why the Media Show was so frustrating to many in public relations.

Over the seasonal period, the BBC showed Absolutely Fabulous: The Movie. That presented public relations leeching off the worlds of fashion, celebrity, business and media. But at least it was affectionate and ridiculous. Surely no one could confuse that with the truth.