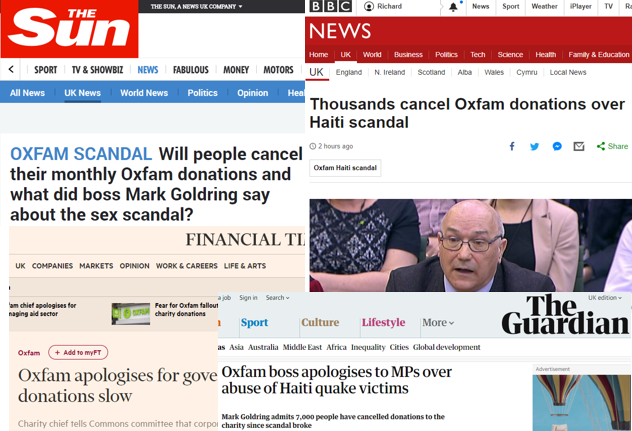 Every so often along comes a crisis that is set to be a gold-plated classic which breaks all the rules on managing reputational risk. It is not very often though that such a crisis is to be found in the charitable sector.

The current maelstrom surrounding Oxfam is a powerful reminder that no organisation is now immune from the need to prepare for a crisis that threatens its very survival. So how best to analyse what went wrong for one of the UK’s biggest charity names?

For any crisis there are key strategic and tactical decisions to be made if reputation is to be protected. The first strategic decision is to actually recognise that you are facing a potential crisis.

That may sound strange but an enormous number of decisions are taken every day by busy, pressured senior leadership teams. At yesterday’s House of Commons International Development Committee, Mark Goldring, the Chief Executive of Oxfam admitted to not even reading the report into the wrongdoing in Haiti that has led to the current crisis.

If you are seeking to spot that one decision or event that needs extra focus I would always suggest reaching for the British Standards Institute’s excellent BS 11200:2014 which defines a crisis as: “an abnormal and unstable situation that threatens the organisation’s strategic objectives, reputation or viability.” Or at its simplest look for the situation that if you get it wrong could threaten the organisation’s continued existence by significantly breaching the trust placed in it by key stakeholders.  Most crises arise out of “a gap between corporate practice and stakeholder expectations”.

Real crises also have ‘victims’ and how you treat those victims will determine how your organisation will be viewed and how well or otherwise you will survive the storm.

For Oxfam the victims were the young women provided as prostitutes to Oxfam employees in Haiti and women allegedly forced to trade sex for aid. Their best interests and the need to protect them did not seem to play any part in the decisions the Oxfam leadership team took when the scandal was first brought to their attention. Their plight has similarly played little part in what Oxfam has said or done since the story broke either.

Back in 2011 Oxfam took a short-term fix of managing out the executives concerned enabling them to in effect swiftly take up other similar positions in other similar organisations presumably with similar opportunities to exploit the people they are sent to help.

It is a classic mistake often made by organisations to see themselves as the victim and to act accordingly.  I suspect Oxfam made the huge error of thinking it was the victim of rogue members of staff threatening its good name when the real victims were exploited young women in need of its protection in the wake of a terrible natural disaster.

The second big error Oxfam made was not reporting what was indeed criminal activity to the relevant authorities.  Prostitution is illegal in Haiti so the police there should have been informed.

Given that there is a suspicion around the age of the women involved, Oxfam should have also reported the situation to the relevant law enforcement authorities in the UK where it is headquartered.  Apart from being the right thing to do this would also have allowed Oxfam to deflect criticism onto the alleged perpetrators of a crime rather than onto the charity’s own governance arrangements.

Any organisation can suffer the impact of one or two ‘bad apples’ but when the organisation fails to ensure such employees are dealt with appropriately the problem becomes a systemic one that calls into question the values of the organisation as a whole.

Once an organisation sets its strategic course in a crisis situation there are other tactical decisions to be made.  These are largely around the tone of the communications; the spokesperson; and channels used to reach key stakeholders.  Here again Oxfam and its chief spokesperson made errors.

The Times broke the story first on Twitter on Thursday, 8 February and then actually in the newspaper on the Friday.  Oxfam’s Chief Executive was on the BBC Radio Four programme the day after – February 10. But given that he and Oxfam had had at least a day to reflect the resulting interview once again put Oxfam at the centre rather than the victims. It was a reactive and uninspiring.

Us crisis communicators talk about the five ‘Cs’ of crisis messaging: Concern, Clarity, Control, Confidence and Competence. Basically, stakeholders want to hear sympathy for the victims and a credible plan to put right what has gone wrong. We did not really hear any of those.

To compound matters further Mr Goldring then gave a disastrous interview to the Guardian on Friday, February 16 when there was a chance the crisis could be if not exactly be over then at least move to a more stable phase (to paraphrase Alistair Campbell if a crisis crosses two weekends then the situation truly is grave.)

With more than an echo of BP’s Tony Hayward “I want my life back,” Oxfam’s Chief Executive Mr Goldring told the Guardian he had not slept for six nights saying: “The last six days have been the most intense and challenging of my life.”  Yet again identifying Oxfam as the victim he stated: “The intensity and the ferocity of the attack makes you wonder, what did we do? We murdered babies in their cots?”

I suspect commentators will for years to come be raking over the ashes of this particular crisis for lessons to be learnt. As for Mr Goldring I fear he may well soon be joining the likes of Tony Hayward and Gerald Ratner as examples of how to make a bad situation worse.  As for Oxfam, its reputation hangs by a very fine thread.