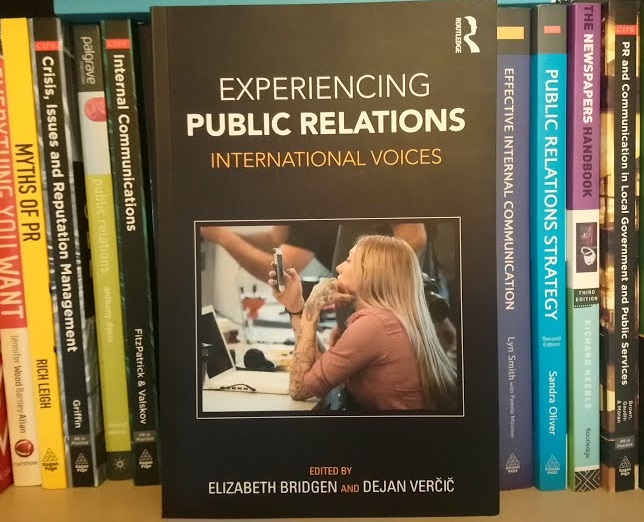 Here’s the premise: professional associations and textbooks assert that public relations is a strategic management function. Yet many people’s experience of the work is far removed from this ideal.

The editors write: ‘The vast majority of public relations practitioners are not strategists; they don’t hold managerial positions and they don’t belong to the dominant coalition.’

Just as sociologist Irving Goffman made a distinction between ‘frontstage’ and ‘backstage’ behaviour, so this book promises to explore behind the scenes and tell the messy truth about public relations work. This is a book about the backstage of public relations.

It emerged from discussions at a public relations academic conference, and the 15 chapters are like experiencing the varied styles and approaches of scholars presenting at a conference.

Spot the irony? A book that purports to be about the lived experience rather than the scholarly ideal reads like a roomful of researchers talking to each other.

But then, as the editors acknowledge, a book covering the lived experience of millions of practitioners around the world would be impossible to research and publish.

So, what we get are different perspectives on researching the question. Since any academic conference will have a mix of the boring and the brilliant (our experiences are necessarily subjective), then let me pick out my highlights.

Howard Nothhaft from Lund University shares a thrilling Masters-level class with us. He presents a fictitious scenario involving the drunk driving of the monarch of a European country leading to a crashed car in public view. There were no casualties, but how to handle the scandal and manage the constitutional crisis? How far should the apology go – or should the PR team stonewall on behalf of the royal family?

Their teacher found the case more problematic. What was the truth? The extent of the drunkenness was for the authorities to discover, and what about any unknown or undisclosed medical conditions? It would be unethical to reveal these (it would either be a speculation or a breach of confidentiality).

What follows is a historical analysis of truth and lies for a post-truth age. A quick review of 14 public relations textbooks found no index entries for ‘fact’. ‘It is hard to avoid the impression that textbook authors are treating the question of factuality like a can of worms.’

‘The professional judgement of PR practitioners ultimately is a judgement about what one can get away with in public and media. What is believed and what is not. How empty can a glass be for it to be declared, accurately and truthfully, half-full?’

He accepts that most academics will find this evasive, but points out that public relations would not be a large and growing industry with (some) very well paid advisers if it were only about the dissemination of simple facts.

Paul Willis describes his approach to consultancy management as ‘making it up as I went along’; Sarah Williams revisits her former workplace ‘tribe’ in the guise of an ethnographer to explore the meaning of professionalism; Philip Young looks at the representations of public relations in popular fiction (‘the lens of fiction is used to reveal truths about the nature of public relations’); Oyvind Ihlen explores public relations as a radical activity.

Elizabeth Bridgen (co-editor of this volume with Dejan Vercic) views public relations as ‘dirty work’, placing practitioners alongside gynaecological nurses and funeral directors (‘someone has to do it’).

It may not be physically dirty, but it can be considered morally or emotionally dirty work.

A review of the editorial coverage of public relations in industry publication PR Week leads her to conclude that ‘public relations (or aspects of it) could be understood as dirty work with a moral taint.’

In the epilogue, Jordi Xifra dispenses wisdom about what has gone before. He cites Sam Black complaining that it is a mistake to use the acronym PR instead of ‘public relations’. Xifra writes:

‘Using the PR acronym doesn’t contribute to solving the identity problem of the discipline’.

This has been a highly selective review, but it’s probably enough for you to draw your own conclusions. A book that sets out to reveal the backstage of public relations work is in effect an academic conference in print. You judge whether that sounds boring or brilliant.