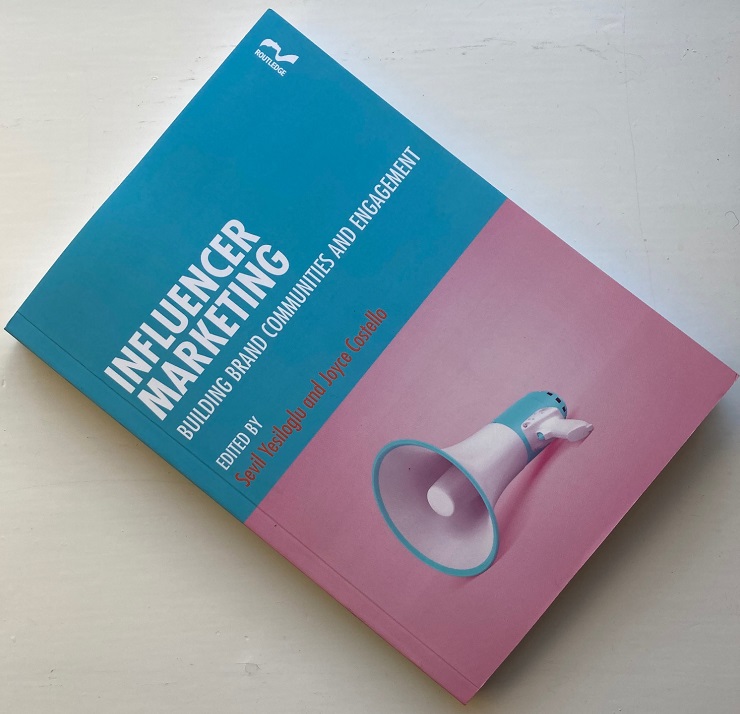 Is influencer marketing a new discipline? For most digital marketers, it’s less than 20 years old given the prominence of influencers on YouTube (born in 2005) and Instagram (born in 2010). Yet from a public relations perspective, influence is an age-old concept that embraces among others royal patronage, celebrity endorsement, expert opinion, media and analyst relations.

For the editors of this book – one of the first academic textbooks to explore this discipline – the difference appears to be between the enduring principles of influence and the practice widely known as influencer marketing.

The two editors were colleagues at Bournemouth University, but they and the many chapter authors bring a global perspective to what is often seen as a Western, individualistic practice.

This is an academic textbook, with most chapters contributed by scholars. Should practitioners take notice? There’s a very useful chapter on influencer marketing and the law contributed by a law lecturer; another on advertising regulations; and I recommend the chapter on identifying influencers for its clarity around ways to categorise influencers.

There are also useful insights into why young people are open to being sold to on social media: many are motivated by a fear of missing out (FOMO) while ‘parasocial relationship theory’ explains why ‘consumers, particularly adolescents, typically admire social media influences and consider them like their friends.’

This leads to the ethical problem. If people follow influencers because they believe them to be their friends, they’re less likely to be alert to the commercial motivation of the influencer. What looks like success for the marketer looks like manipulation of the consumer – though the chapter that addresses this does note the power of consumers to ‘punish’ influencers they consider to be overly commercial or for choosing inappropriate collaborations.

Given this power, can influencers help change the world for good? The fashion for environmental activism and the promotion of plant-based diets might suggest so. So might Joe Wicks’s family-oriented fitness workouts streamed on YouTube. But there is clearly a dark side to influencer marketing – and this is the focus of a whole section in this book.

The Fyre Festival showed not only the power of influencers, but also questioned the influencers’ credibility when they inadvertently endorsed what would eventually be known as a complete fiasco in the entertainment world.

This was an extreme example. Much more common is the blurring of the boundary between original and sponsored content. According to a study published here: ‘When we explored trustworthiness, the audience was significantly more likely to trust non-sponsored content… Nonetheless, some social media personalities are known for not always disclosing promoted brands and hiding behind the “I genuinely love it” slogan.’

Elsewhere, a warning is issued: ‘Marketers should focus on achieving “earned” endorsements by nurturing long-term relationships with endorsers, rather than ephemeral sponsorships.’ That sounds to me like a vote for public relations.

Scott Guthrie, a public relations consultant specialising in influencer marketing, offers his perspective on virtual influencers, tracing their lineage ‘as far back as Maria, the robot of Fritz Lang’s 1927 science-fiction drama film Metropolis.’ He asks ‘what does it really mean to be authentic at the start of the third decade of the twenty-first century?’

‘CGI influencers… are a mirror reflecting today’s society and questioning what it means to be human in a digitized world.’

If you feel at all queasy about the ethics of virtual influencers, who come complete with credible backstories, Guthrie suggests ‘they help the viewer explore the concept of authenticity’. After all the best-known virtual influencer Lil Miquela’s ‘comments and interactions rely on a well-written brand manual and a team of humans to write them.’

The suggestion cited here that every virtual human should be watermarked to indicate that it is virtual rather than human and to trace the owners to establish who is responsible for the content and the motivations behind it suggests that virtual influencers may come to be seen as more reliable and credible than the flawed humans they more perfectly reflect. In Lil Miquela’s case, she’s forever 19 and has no need to diet or grapple with body image worries. What’s more, she’s ‘more than a clothes horse. She promotes positive social change.’ And isn’t there something fake and affected about real celebrities (as she apparently suggested in a BBC interview!)?

This textbook is a welcome addition to an important area. The academic approach means that most chapter contributors provide their reading of the literature before discussing their research contribution. This leads to some repetition as the same theories are recycled many times.

The focus is on influencers, but there were no chapters dedicated specifically to community building or the concept of community, despite the promise of the book’s subtitle. For more on brand communities I recommend Richard Millington’s second book The Indispensable Community.

Influencer Marketing opens with an overheard conversation in a grocery store, in which a young boy tells his mother that he wants to grow up to become an influencer (rather than a firefighter or astronaut as prompted by the mother). What could be better than being on YouTube talking about all his favourite stuff?

One of this book’s conclusions is: ‘Aiming for a career as an influencer is entirely possible but requires the influencer to consider what is important to their audience.’ Lil Miquela may remain eternally 19 but that boy will grow up even as audiences focused around music, gaming, fashion and beauty will tend to stay forever young. Cheerful ‘hey guys’ greetings given to camera are already stretching it for twenty-something influencers and would sound insincere on the lips of anyone middle aged.

But then there’s more to influence than fashionable social media channels. 2020 gave us new examples from Clap for Our Carers to the fundraising efforts of centenarian Captain Tom Moore. Both used social media, of course, but also traditional media and real community networks. To borrow a concept cited above, online communities ‘help the viewer explore the concept of authenticity’ as useful preparation for life as a citizen and member of the wider community.