Not for organisations who prioritise employee engagement

Andy Hind is an independent communications consultant and experienced head of communications for the music and media sector. He is studying the CIPR Professional Diploma with PR Academy and this article was written for one of the assignments.

It appears that trust is in short supply.

The Edelman 2019 Trust Barometer paints a grim picture of a world experiencing a crisis of trust. Trust in business, government, media and non-government organisations is failing and there exists a pronounced class divide between the informed elite and the general public. There is a pervading sense of pessimism with only one in five people feeling that the current system works for them. Our globally adopted use of social media as a means of communication is increasingly viewed as a corrupt channel, with ‘fake news’ now a globally recognised term, so much so that Collins Dictionary declared it the 2017 ‘Word of the Year’. This is a world crying out for change and much like our climate, it appears ‘trust’ is in danger of irreparable harm.

But even in times of crisis, there exist opportunities.

The bright light for employers is the potential relationship they can foster with their employees.

Edelman’s research highlighted that in these uncertain times, 73% of respondents looked to their employer as a reliable and trustworthy source of information noting four key areas where businesses should focus their actions – lead change, empower employees, think locally and CEO leadership.

But is this really surprising and what does this mean for employers? What part does trust play in the working dynamic and is it worth investing in?

In David Horsager’s book, The Trust Edge he makes a compelling case for the importance of trust to business with his ‘eight pillars model’, in this he notes that trust is a ‘tangible, learnable and measurable skill’. Partha Dasgupta, Professor of Economics at Cambridge University sought to categorise trust more as a commodity, a definition that imparts a greater sense of economic value rather than an intangible ‘feeling’ associated with positive emotion. Applying the economic analogy, as a commodity, trust can be gained, lost and even manufactured.

The Edelman research certainly makes a case for trust, citing that three out of four of those surveyed in the UK stated that how an organisation treats its employees is one of the best indicators of its level of trustworthiness.

However, at first glance, the trust employees place in their employer may seem at odds with the wider findings; after all, trust in business overall has seen a decline. It appears that individually at least, we are more trusting of our own employer. Considering how much time we generally spend at work, perhaps there is logic to this.

A 2018 study commissioned by the Association of Accounting Technicians (AAT) calculated that on average we spend 3,507 complete days working and typically remain in a role for between four and seven years. Other global surveys have broadly showed the same trend noting longer careers as a driver. When you consider the only other single activity you spend more time doing is sleeping, is it really any surprise that we invest in this employer/employee relationship?

Employee trust as a driver of engagement

Employee trust is grounded in the research of employee engagement, a term first coined by William Kahn in 1990 and further defined through the academic work of William Macey and Benjamin Schneider in their 2008 paper The Meaning of Employee Engagement. Fast-forward a little over ten years, if you spend time in any human resource or communication team you will hear employee engagement proffered as the byword for corporate success. Indeed, increasingly it is a term embraced by the C-Suite as a driver of organisational performance. Figures from HR specialist Gartner, suggest 70% of business leaders now believe that employee engagement is critical to business success.

Academics and business leaders make a strong case for the correlation of an engaged workforce and success in business. A Google search for ‘employee engagement in business’ returns a staggering 204 million results. So, with this amount of research and literature, you would perhaps be forgiven for thinking that employee engagement is easy.

‘If it was easy, everyone would do it.’

So said Tom Hanks’ character Jim Duggan in the film A League of Their Own, but the fact remains that employee engagement is hard and organisations continually struggle to engage their employees. Those that do commit need to work even harder to maintain it, so are the results worth the effort?

This got me thinking about a previous company I had worked for where I headed up a large communications team in a mid-sized music business. I was privy to the findings of our annual staff engagement survey and each time the key themes were broadly as follows:

Our overall engagement scores were nothing special and despite diligently developing engagement plans, the results year on year broadly remained the same, much to the consternation of the management team. Why was this? Looking back, the organisation suffered from an unwillingness to commit to change for fear of not meeting expectations and being held to account for failure, preferring vague, ill defined improvement measures that invariably were cascaded down to individual team managers, but rarely championed by those at the top of the organisation.

That’s not to say that work was not being done behind the scenes. The key thing was much of it remained invisible to the employees, which in turn fed directly into the core concerns regarding a lack of transparency by management and lack of meaningful communication, which exacerbated the already powerful feeling that staff were not being listened too. In short, a loss of trust that anything was ever going to change.

We had inadvertently created a monster where instead of providing an open forum for building a better organisation, the annual survey became a lighting rod for negativity undermining what should have been a mechanism for engendering engagement and organisational trust. I see this now as a localised example of the class divide that the Edelman research noted, with staff playing the part of the mass public and management the informed elite. The unwillingness by management to commit to change, to share information and most of all, listen properly to employee concerns eroded employee trust that anything could ever change.

My experience is in no way unique; failure to listen is common within organisations as this article looking at 7 reasons why employee surveys fail highlights. If this sounds familiar to your organisation, consider not only the feedback mechanisms employed, but also the underlying commitment of the organisation to really listen to what has been said.

The topic of two way organisational listening and its fundamental importance to business success has been extensively researched by leading Australian academic Jim Macnamara in his research paper ‘Creating an ‘Architecture of Listening’ in Organizations. He identifies a clear need for organisations to create an architecture of listening, noting that the speaking to listening dynamic is typically 80/20 and is usually geared towards the organisation and its own ends, such as complaint resolution, social media monitoring or other such operational focused research. Of course, self-serving research does little to engender trust and opens up issues of the ethics of listening especially in this increasingly digital age where privacy concerns and dataveillance, defined as ‘the systematic creation and/or use of personal data for the investigation and monitoring of the actions or communications of one or more persons’, are increasingly common. However, the power of proactive, two way transformational listening as a building block of employee engagement and ultimately trust in the organisation cannot be understated.

The science behind trust

Can employers build better trust with their employees at a deeper, subconscious level?

A study looking at the Neuroscience of Trust believes so, citing the chemical oxytocin as a key player in our propensity to trust, apparently we are chemically wired to trust. Oxytocin, or the ‘love hormone’ is a key driver of social bonding and empathy and its release levels are closely linked to trust, engagement and ultimately better organisational performance. The study identified that organisations with high trust exhibited 76% more engagement and 50% higher productivity when considered against low trust companies. The study also identified eight effective management behaviours geared towards promoting trust that included: personal recognition, discretion on how work is done, broad communication and leaders who show vulnerability. These traits are widely recognised as desirable for successful leaders and indeed showed synergy with the findings from the Edelman Trust at Work recommendations and Horsager’s ‘eight pillars’ model.

The role of the leader

As a leader, do you inspire trust?

One of the key drivers of employee trust in an organisation is the relationship with the CEO. The Edelman research noted 76% of people felt that CEO’s should be actively leading change across societal issues rather than waiting for government intervention. A recent US example from May 2018 stemmed from the US administration’s decision to separate migrant children from their families if they were caught entering the US illegally. CEO’s from Apple, Uber amongst others spoke out about the practice and the Bank of America ultimately stopped funding of ‘private prisons’ in the wake of the crisis. Another notable instance involved Starbucks closing over 8000 US stores for an afternoon to undertake unconscious bias training after an employee had ejected two black men from a store while they waited for a meeting. Notwithstanding individual company motives and clear public relations considerations underpinning their decisions, these instances have been broadly held out as an example of corporate America taking a stand.

There are of course flip sides to this and trust can just as easily be destroyed, think Elon Musk’s ill advised tweet concerning Tesla’s supposed secured funding for its IPO or the Volkswagen emissions scandal. Trust in both companies in the aftermath was seriously damaged and has arguably still not recovered; Tesla stocks are well below their 2018 high and Volkswagen are still trying to recover ground and may have inadvertently killed the diesel market.

These are extreme examples but they act as stark reminders of just how influential leaders are in building or breaking trust through their actions, directions or indeed, the keypad of their smartphone.

Trust and the bottom line

There exists a clear and demonstrable link between the trust that an organisation fosters with its employees and its overall performance.

By viewing trust as a commodity it helps rationalise this as a tangible business asset, much like brand and goodwill but somehow more solid and dependable.

Trust is clearly important and there exists a prevailing climate for leaders to focus on building trust with its people to drive better organisational performance. The climate appears right to capitalise on the willingness of employees to place their trust in, and engage with, their organisations and, as leaders, we are ideally placed to shape this. Create the right atmosphere and culture, consider your organisational listening and be prepared to personally take a position on issues that matter to your employees. This need not be the biggest societal woes of our time, maybe it’s a local issue, but it should be something meaningful and impactful.

Trust maybe in short supply, but it is a valuable commodity for your business that you need to be trading in.

Andy wrote this article as part of his CIPR PR Diploma qualification. Want to get qualified too? Find out more. 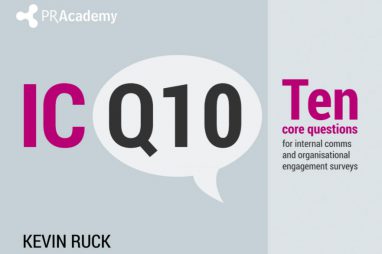 Kevin Ruck explains how his AVID framework can be used as the basis for ten core questions for internal communication audits.

'Successful colleagues that are active on social media are the brightest brand ambassadors, not just those specifically hired for representing a company in a positive light.' Guest author Olha Boiko explores internal brand advocacy.