Who do you serve? 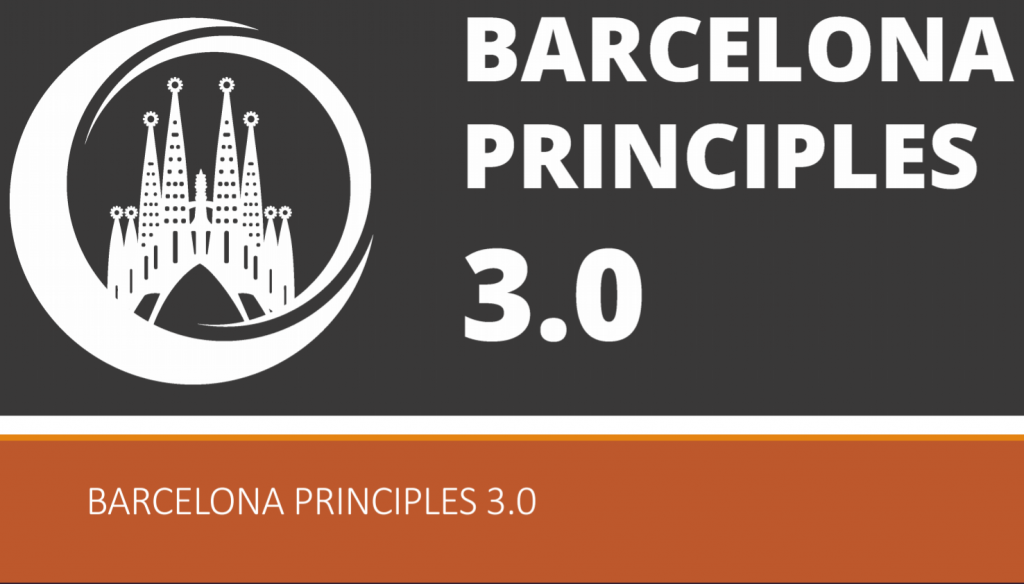 ‘No man can serve two masters: for either he
will hate the one, and love the other; or else
he will hold to the one, and despise the other,
Ye cannot serve God and mammon.’
Matthew 6:24 (King James Bible)

At first glance, the question of who public relations and communication serves is straightforward. There’s a paymaster, and it’s our professional duty to act at all times in their best interests.

Talk by academics of our responsibility to wider society – not just to our organisations – may have been winning the argument within the academy (see section below), but has not yet gained much of a hearing among practitioners.

So consider the latest iteration of AMEC’s Barcelona Principles published this month. Ostensibly, these are a statement of guiding principles to inform better measurement. But to do this, they now take a cradle-to-grave approach – from how we set goals to the long-term impact of our work.

The Barcelona Principles are guiding principles for public relations and communication, full stop.

I’ve highlighted the new third principle: that outcomes and impact should be identified for stakeholders, society and the organisation. It’s a given that we should attempt to measure our impact on our organisations – that we should be able to demonstrate the value we deliver. It also seems straightforward that in order to do this we should show the impact of communication on various stakeholders, many of whom are autonomous agents whom we seek to influence.

Successful relationships go two ways, remember. So measuring our impact on stakeholders is not simply a question of whether they acted in ways that served the interests of our organisation. That’s a one-sided view of a relationship. We also have to measure how well the organisation served their needs. Nor can we be the sole judge of this.

Much more contentious, though, is the new instruction to measure the impact the organisation and its communication has on society. That we should look beyond profit.

There’s still an undercurrent in business that follows the economist Milton Friedman in rejecting a stakeholder view of organisations in favour of a much more straightforward profit motive. From this perspective, the sole duty of managers and directors in profit-making businesses is to make money for the owners (ie shareholders).

Milton Friedman is long dead, and we have since seen the rise of a stakeholder view of organisations. We’ve also seen the emergence of concepts like the triple bottom line (‘people, planet, profits’) and the talk of corporate social responsibility (CSR), now more commonly termed environmental, social and governance (ESG).

If measuring impact on stakeholders is less straightforward than measures such as share price, market capitalisation or ‘shareholder value’, imagine the complexity of measuring the impact  of organisations on society. You can set some measurable goals, such as around net zero carbon emissions. But that’s just another output measure. It still doesn’t tell you what impact you’re having: you may be causing less harm, but are you doing any good? If the organisation did not exist, it would produce zero carbon emissions, so that measure alone is hardly an argument for its continued existence.

You may be a model employer providing opportunities for older workers. But does that mean as a consequence that you offer fewer chances to young people? Who’s to arbitrate between different groups in society? Who’s to make the case for as-yet-unborn future generations?

It’s hard enough to arbitrate between paying employees more and returning greater dividends to shareholders. In an ideal world, the one should lead to the other, leaving everyone happy: employees, trades unions, managers, shareholders. But 2020 is a good time to remind you we don’t live in that ideal world. Leaders face tough choices.

Focusing on your impact on society is easily said. It’s a good badge to wear. But if you’re to wear this badge into your meeting with the senior management team, you should prepare for some probing questions. Not least, the challenge that you can’t serve two masters.

You’ll need to have thought through the logic of your arguments. You need to talk the language of leaders and address value, even while discussing intangible assets like social capital, relationships and reputation. You need to look beyond short-term measures to focus on long-term concerns. Take legitimacy.

For decades, big tobacco companies argued that they were legitimate businesses (cigarettes were restricted, like alcohol, but not banned like some classified drugs). They could point, as a social good, to the money they returned to the exchequer through taxes and to the people they employed. They used sponsorships of sports, the arts and education to signal the upsides to their existence. They obfuscated over the science – or sometimes even sponsored research into the effects of tobacco as a sign that they took public health seriously.

But slowly, over decades, the rules were tightened and public attitudes shifted. While cigarette manufacturing remained legal, society began to withdraw the licence to operate. Tobacco was legal, but no longer socially acceptable.

Businesses and organisations need to look to their impact on society for fear of being the next tobacco. Is alcohol next? Or sugar? And what about car manufacturers, airlines and oil companies? Get ready for some major adjustment between big business and society.

I’ve framed this as a business discussion as it simplifies the argument. But it does not change the principle.

Public and not-for-profit organisations also need to watch their legitimacy and to show their positive impact on society. Schools and hospital trusts can be placed into special measures; ultimately, they can lose their licence to operate. And with well over 150,000 registered charities in the UK competing for attention and funding, the third sector is arguably the most fiercely competitive space of all. That a charity as large and famous as Oxfam has narrowly survived an existential crisis should be a warning to others. And that was before the inevitable funding crisis caused by the closure of charity shops on the high street.

Outputs and impact. Short-term and long-term. The value of intangible assets namely relationships and reputation. Legitimacy.

These are concepts and concerns facing public relations and corporate communication leaders. Nor have I directly addressed the climate concerns that seemed set to be the big talking point this year (following Greta Thunberg’s lead) before attention turned to the pandemic. But if business depends on societal legitimacy, then society depends on a sustainable environment, so you can’t easily disentangle social from environmental issues.

These concepts may not be front of mind for most public relations practitioners. The CIPR’s State of the Profession 2020 report suggests that while survey respondents talked about their strategic role, their activities and concerns remain largely tactical.

So, for help with these concepts, you may need to turn to academic literature. To provide some signposts, here’s a brutally simplified narrative to explain public relations academic thinking.

Public relations practice is over a century old, but the academic discipline is newer. Practice predates scholarship.

So early public relations scholars, in the middle of the twentieth century, attempted to codify an emerging profession. Their primary concern was to demonstrate the value public relations could provide to organisations through US textbooks such as Cutlip, Center and Broom’s Effective Public Relations (first published in 1952 and still in print though multiple editions) and Grunig and Hunt’s Managing Public Relations (its one and only edition was published in 1984). The titles of these books give a clue as to their purpose.

Public relations scholars have already been placing society at the centre of their thinking for several decades.

This presaged the socio-cultural turn in public relations scholarship which is now more mainstream than the instrumental or managerial school. In other words, public relations scholars have already been placing society at the centre of their thinking for several decades. There may be no ready textbook that gives you, the practitioner, all the answers you need. But you can be sure someone will have preceded you and framed the questions you should be asking.

To take one example, activism is often seen as a force to be resisted from a corporate perspective. If you’re an oil company, Greenpeace is an implacable opponent. Academics have subverted this thinking and called for public relations to be a form of internal activism.

My narrative is necessarily over-simplified and selective. I can hear the objections now.

One I listen to is that there is no such divide between the organisational focus and the societal view. Anne Gregory is capable of writing an ‘instrumental’ book like Planning and Managing Public Relations Campaigns; she’s also capable of writing Strategic Public Relations Leadership, which takes a much more elevated view of the role of public relations and looks at ethics as well as measurement.

And this brings me back to you, assuming you’re working in public relations. You too have to cover your back by proving your value month by month; and by planning and delivering campaigns through outputs. But you also need to address questions of ethics, take a rounded view of stakeholder relationships and be concerned about long-term societal legitimacy.

In other words, and as AMEC instructs us, you need to measure your impact on organisations, on stakeholders – and on society.