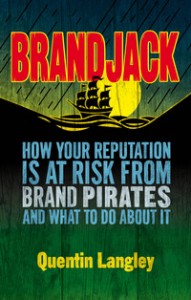 There are two easy ways to write about public relations.

Easiest of all is the practitioner retelling their ‘war stories’ with no awareness of wider intellectual or academic debates.

Only slightly harder is the academic approach: a cautious, formulaic and barely readable repetition of others’ opinions packaged as a worthy textbook.

Then there’s the hardest way: a book written from real-world experience, in plain English, but aware of broader arguments and trends. Langley has succeeded and I’m impressed.

I’d not expected to like this book. Partly this was because Steve Earl and Stephen Waddington got there first with Brand Vandals. Partly it was because the word ‘brand’ is so overused. But Langley has anticipated my objection:

Where I see ‘brand’ as an overused term, others see nothing to admire in ‘public relations’. Langley points out that some of its biggest users, NGOs, ‘deny that they engage in PR at all… They talk about having media teams, campaigning teams, advocacy teams, and the rest, but think that “PR” is something the big bad corporates do.’

This introduces us to this book’s approach, placing case studies at the centre. So we have the memorable heavyweight contest between Nestle and Greenpeace over palm oil. A knockout in the third round by Greenpeace following its brandjacking of KitKat (‘give the orangutan a break’).

To be classified as a brandjack, something needs to be both a crisis and, specifically, one that plays out significantly in digital media.

Langley identifies and illustrates nine categories of brandjack: self-, ethics-, customer revolt-, staff, impersonation-, fake-, aggregation-, unanticipated response- and cheeky-brandjack. His case studies are from the years 2001 to 2012. While they’re mostly familiar examples, the author identifies what the protagonists did right and wrong in each case.

So the Airbnb #ransackgate case from July 2011 is explored. When someone’s blogged complaints that their house had been robbed and vandalised went viral, how did the startup respond to this threat to its business model and reputation?

After an initially slow response, Airbnb treated this as a serious issue (there was some suspicion it may have been bogus) and set up a 24-hour helpline and a $50,000 insurance policy for hosts.

The lesson is that people are always initially more sympathetic to the individual than to the corporation. Langley suggests that after its shaky start, Airbnb recovered by putting forward its CEO as a human face, an advantage in this case since the blogger remained anonymous throughout. Airbnb solved the problem for the future, and was able to move on having acknowledged ‘we have really screwed things up’.

The final chapter pulls together some lessons for organisations operating in an age of transparency. ‘To make a transparency strategy work, you need to engage with your staff first.’ It sounds easy.

For years, organisations have sought to maintain the idea that their reputation can be manipulated by strict control of who is allowed to speak and the messages they deliver. If that ever worked, it doesn’t work now.

Langley ends with his 11 steps for managing brandjacking. Six are steps to take before a crisis hits; five are actions to take during one.

It may a less radical approach than the self-inflicted brandbombing recommended in Brand Vandals, but the steps are sensible and practical – and based on experience.