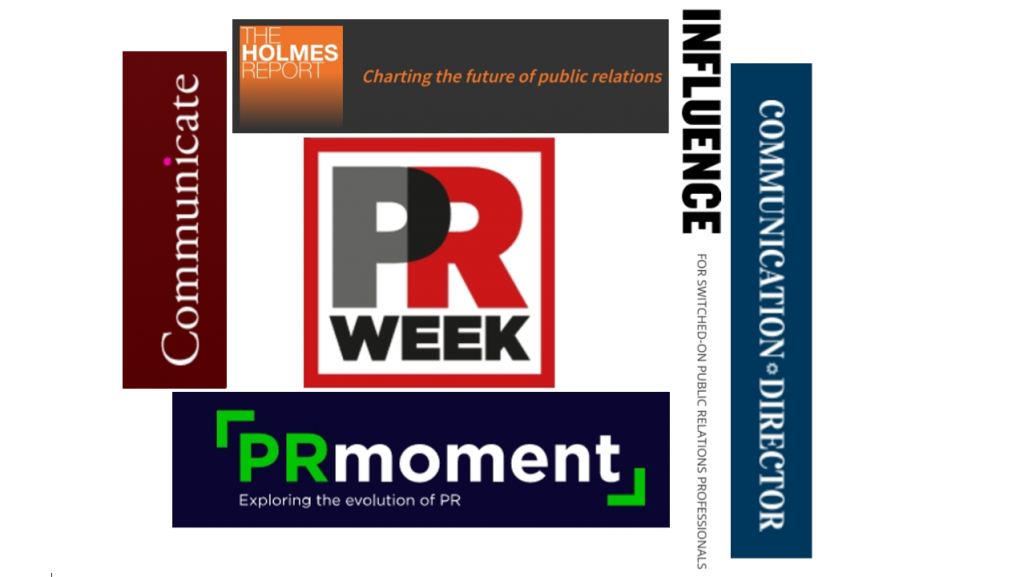 This is not the place to rehearse the trade or profession debate, but it’s a useful frame for understanding the ways in which public relations is presented in the media. This is also a good place to chart the shift from print to online sources of information. What and who can we trust?

Michael Heseltine’s Haymarket launched PR Week in 1984 as a stablemate of Campaign magazine, in existence since 1968. This explains its emphasis to this day. Campaign is focused on marketing, advertising and media and PR Week sees public relations as a form of weak advertising in which agencies (sometimes called ‘shops’) win clients and deliver campaigns (some subsequently collecting PR Week awards).

For most of its life PR Week has been a classic trade publication, delivered free to registered subscribers, funded by advertising. Yet changes in the media landscape mean that PR Week is no longer a weekly publication, nor is it free. It went monthly in 2013 though retaining its well-recognised name. Today, the print edition is delivered bi-monthly, though most subscribers receive its news and commentary online.

PR Week content is paywall protected, with limited access to non subscribers. An individual subscription costs £67 for three months (£252 a year by direct debit). There’s a discounted rate for PRCA members whereby PR Week is bundled with the PRCA membership fee. Previously, PR Week had been free with CIPR membership, but when the CIPR withdrew from this arrangement the PRCA made its own agreement with Haymarket.

PR Week does have some strong assets as befits its long history as the leading trade publication covering public relations. Its annual awards are still coveted, and its annual league table of agency rankings is an important piece of industry research. Above all, its editor in chief Danny Rogers (@dannyrogers2001) is a well-respected commentator who has been well placed to observe the blurring of lines between advertising and public relations (he has also edited Campaign magazine). His 2015 book Campaigns that Shook the World provides a narrative of how public relations has evolved over the past few decades through detailed case studies.

PR Week also has a strong brand internationally, with regional editions covering the US, Asia and Middle East. It’s rare for British publishers to succeed in the US, so PR Week deserves credit for becoming established across the Atlantic.

As the premier trade publication covering public relations, it has spawned imitators and competitors. PRmoment and Holmes Report are led and staffed by people who learnt their trade at PR Week.

Unlike PR Week, PRmoment has no print legacy. It began in 2009 as a website and now competes with PR Week as an event and awards organiser, and shares with PR Week a similar preoccupation with public relations agencies and the people who work for them.

It is also something of a British export success story, with a PRmoment India website. Creative Moment is another spin-off that started in 2018 that recognises the overlaps between advertising, branding and public relations and the opportunity for those seeking to position themselves as the lead creative agency.

PRmoment publisher and Creative Moment co-creator Ben Smith has a business development background within public relations, and his podcast interviews with prominent consultants are detailed and insightful.

The editorial emphasis is on features and opinion articles, leaving news coverage to PR Week and Holmes Report.

The website is free; those who register their email addresses are offered email updates from the site and this is a free service (the publisher gains the ability to promote events and conferences to subscribers).

This is yet another successful British export. Founder Paul Holmes (@paulholmespr) has a background in newspapers in the north of England and was a former news editor at PR Week. He has run his own publishing business for the past 20 years, and previous titles have included Inside PR and Reputation Management magazine. The Holmes Report has been published since 2000.

This tight team rivals PR Week for news scoops and is unmatched for its analysis of global industry trends.

Most Holmes Report content is free to view but some longer analysis pieces (‘longreads’) are only available to subscribers who pay $199 a year.

Having ended its longstanding partnership with PR Week, and having only achieved sporadic success with its own member publications in the past, the CIPR changed up a gear by commissioning Influence Magazine, a quarterly glossy sent to members. First published in Q1 2016, this print publication has won a succession of publishing awards.

Edited by Rob Smith (@rijsmith) it is produced independently of the CIPR with the oversight of a strong editorial team. It’s a well-written and handsomely produced feature-led publication that adds value to CIPR membership.

What it isn’t is a professional journal. This probably shows admirable restraint by the CIPR in not expecting any direct editorial voice in the publication, nor in requiring necessary-but-dull directory information to appear. But it does mean there is still a gap for a publication that reflects the wider profession and those who work in it: their achievements (awards, honours and qualifications) and obituaries of notable individuals. Nor does it celebrate new members by adding them to a print directory (there was some dismay when the print directory ceased publication, and the CIPR’s website problems – which we’re assured are soon to be resolved – mean that online searches for members are not easy to perform, even for registered members).

Nor does the publication serve to bring new research, new ideas and new publications to the attention of members. There are rarely any book reviews. It’s written by journalists, and there’s little voice for academics and researchers, despite Dr Jon White being a member of the editorial team.

As discussed above, we’re already well served in public relations for trade publications focused on the commercial consultancy sector. What we don’t have is a publication focused on the profession. If anyone is to champion the notion of profession over trade, surely it should fall to the CIPR, the chartered professional body.

Influence magazine is published quarterly and posted to CIPR members.

Supplementing the quarterly print magazine, and free for members and non-members is Influence online. Curated by Influence magazine editor Rob Smith, this makes selected magazine features more widely available alongside curated and commissioned content in the form of blog posts and features.

Occasionally these posts are thinly-veiled advertisements for the CIPR training programme, but for the most part this is a site that champions genuine thought leadership within public relations.

The PRCA is not a publisher beyond its website and social media feeds. But it’s a supporter of a number of existing trade publications. I’ve mentioned the relationship with PR Week. In addition, the PRCA works closely with PRmoment and its international counterpart ICCO works closely with The Holmes Report.

If the trade publications highlighted above all focus on the commercial consultancy sector, there are several publications targeted at in-house communicators.

Published by Andrew Thomas, this Cravenhill Publishing title describes itself as ‘a trade magazine dedicated to the UK corporate communications community.’

The print magazine is available to subscribers (introductory offer of six issues for £50) with some content appearing for free on the website.

Launched in 2005, this is a print magazine with ten issues a year targeted at in-house communicators.

A one year subscription to the print magazine and to content behind the paywall costs £300.

The official magazine of the European Association of Communication Directors, is a quarterly print publicatication published by Quadriga Publishing in Berlin. Topics include brand and reputation, crisis communication, CSR and sustainability, leadership, stakeholder relations and strategic communications.

Its editor in chief David Phillips (e: david.phillips@communication-director.com) is not to be confused with David Phillips, author of Online Public Relations.

So far we have covered trade and professional media that are either commercially-operated or supported by professional bodies or membership associations. But the old model of subscription-based or controlled-circulation print publications is giving way to a more varied diet of free online information and opinion. Just consider that range of free content available on individual blogs and LinkedIn posts. Yet how do you distinguish high quality information from less reliable sources? How can you trust the results of a Google search?

This is where curated approaches add value. PR Place Insights attempts this with the #ThisWeekinPR and #bestPRblogs links each Friday morning. Influence online does this with its curated selected of original and re-published articles. But one other source of reliable content merits a mention here.

Media database vendor Vuelio hosts industry news and commentary as well as sponsoring its annual blogging awards – now known as the Online Influence awards. It’s a useful site for charting the evolution of so-called influencer marketing, as well as a good example of business-to-business content marketing.

So who can you trust among public relations bloggers? According to this year’s awards, the top UK PR blogger is Stephen Waddington.

Google – and artificial intelligence – is good and getting better. But we still need people to make informed judgements over the content they receive. As the title of the CIPR’s report into AI put it, ‘Humans still needed.’

Despite the proliferation of free content online, can I propose another way to summarise this article? Media still needed. Not every appointment is news. Not every client win is news. Not every opinion is equally well informed. It takes caution and it takes judgement to navigate the online world, as the web’s founder Sir Tim Berners-Lee has reminded us only this week. That’s why we need journalists – and academics too – to act as sensemakers. There’s no lack of content. Sometimes all that’s missing is insight.