Do we have to talk to the media in a crisis?

Tony Jaques is a well-known academic and commentator on the subject of crisis communication.  I subscribe to his regular blog posts and always read them with interest.  His latest missive on the media during a crisis raised again the question we often face from a senior management team feeling the heat of this kind of scrutiny: do we really need to talk to the media?

First off in today’s 24/7, 365 days a year media hungry for conflict and controversy we need to be ready for our organisation’s crisis to be played out in a very public way.  If we are to exert any kind of control over the direction of a crisis narrative, we at least need to be present in it.

I have often used a simple diagram I first saw used by media trainer, Brad Phillips, to point out what happens if we are not.  Take a circle and divide it into three sections.  Think then of a classic TV or radio news package about an organisation in crisis.  Roughly one third of the circle is the reporter setting up the piece, one third is some sort of representative of those who have been adversely impacted by the crisis (the victims) and the last third is reserved for the organisation.

What happens if you don’t fill the last third?  Many news organisations will then go off to find someone else who will be critical of what the organisation is doing.  If you are lucky the reporter may try to fill in what he or she thinks you will say.  That may be a guess.  Or they might, if you have gone down this route, read out part of a prepared statement you have sent them.  As a viewer rather than a participant we all know how awful that can sound.

In his blog post many of the examples Tony Jaques was referring to of media engagement during a crisis that perhaps should not have happened – such as Prince Andrew’s disastrous interview on BBC2’s Newsnight with Emily Maitlis – were not this type of media event.  Rather they were individuals seeking to repair the damage of a crisis by using the media.  Incidentally, one of the phrases that a journalist can utter that should make you tread very carefully is “Wouldn’t you like to tell your side of the story?”

The problem here is that you must have convincing answers to the long list of questions that by now have had plenty of time to fester.  This type of interview so late in the day with very little media engagement beforehand is a tough one to pull off.  So much better to have been there from the start.

If the senior management team has accepted your argument that the media must be engaged with then you may next face the issue of being asked to wait until more information is available or better still the organisation has “fixed” the crisis.  But when will everything be known and when will the crisis be “fixed”?

Senior management teams are on the whole used to operating in a certain way.  They identify a problem or opportunity.  Call for research to be done.  Evaluate the options and then make a decision.  In a crisis there will be very little time for any of this, so the challenge becomes how to communicate when you know very little.

Crisis communication is about making sure the organisation itself is the first and most credible port of call when it comes to information about what is happening.  Even if it comes to restating the facts then having the organisation doing this with minutes or maybe hours and giving a commitment to come back when more is known will go a long way.

When it comes to fixing the crisis: as Andrew Griffin says in his book Crisis, Issues and Reputation Management “The order of priorities in a crisis is not ‘do it, then explain it’; it is ‘explain it as you are doing it.’”  Failure to do so creates a vacuum and the assumption may be made that the organisation is paralysed and is not in control of the situation.

The next challenge is getting the tone of voice right.  Here the so-called 5 Cs of crisis communication come in useful:

I have mentioned spokespeople a lot in the above and choosing the right person to articulate the organisation’s crisis narrative to the media is a big decision.  Going straight to the top and fielding your Chief Executive from the beginning runs the risk of escalating the perception of the crisis.  But to not put the Chief Executive up risks your audiences feeling you are not taking the crisis seriously enough.  Tony Hayward, Chief Executive of BP during the Deepwater Horizon crisis was probably over-used.  It may well have been exhaustion behind that notorious “I want my life back” quote.

With the News International phone hacking scandal, the feeling was that Rupert Murdoch should have been leading from the front.  As it was it was too late by the time he put his head above the parapet.  The fielding of the Chief Executive is one of the strategic decisions we will be called upon to advise on and unfortunately there is no right answer to every crisis especially once we factor in how good or otherwise a media performer our senior leader may be.  Certainly, preparation and practice are key.  A range of spokespeople is also a good idea if you are in for the long haul.

When it comes to dealing with the media in a crisis the best preparation is to have put in the work beforehand of building good relationships with the press.  Ensuring the media understand your organisation and what it seeks to do may not prevent the feeding frenzy a crisis leads to, but it may make it a bit less painful and at least provide a basis to get your story across.

You can hear more about handling the media in a crisis at our next PR Academy Crisis Hub Webinar at 1.00pm on Thursday, June 23rd when Chris Tucker will be joined to take your questions by broadcaster and journalist Simon Read. 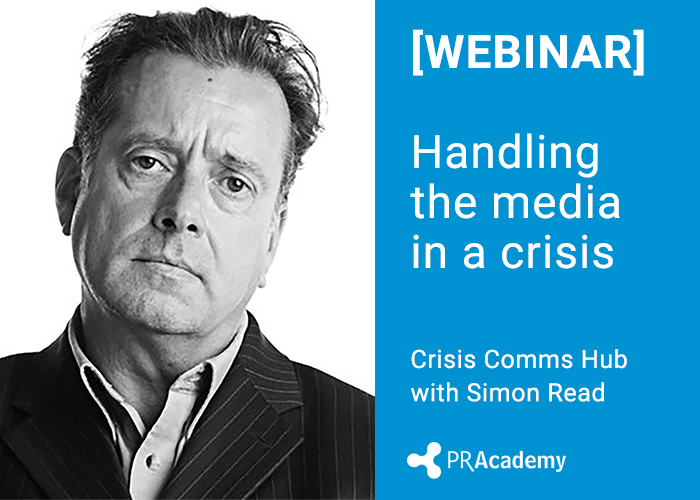 Register for our next Crisis Communication Hub webinar:
Topic: Handling the media in a crisis
Guest: Simon Read – Journalist, writer & broadcaster
When: 23 June, 1pm (BST)
SAVE MY SPOT 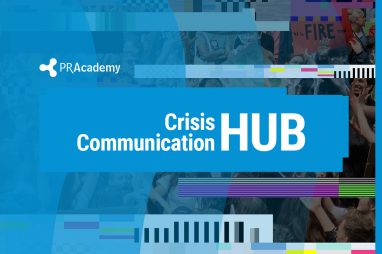 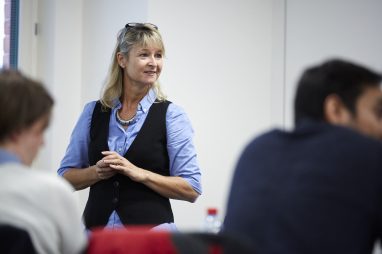 Learn about the different levels and impacts of crises, the building and maintaining of effective plans and the purpose and importance of training. 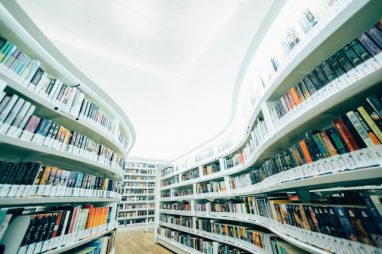