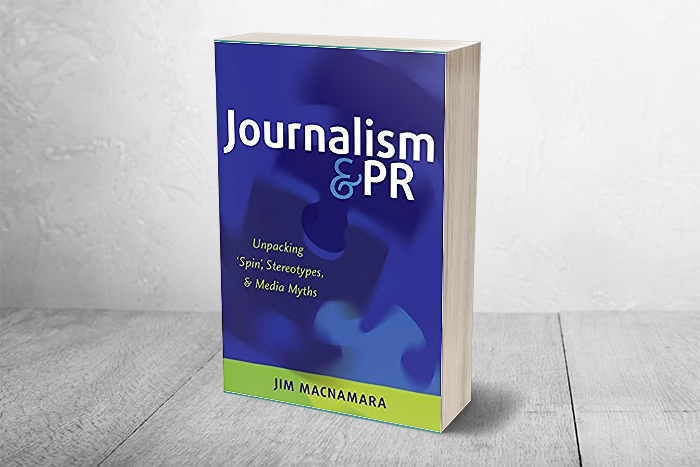 This book will not help you become a more effective media relations manager. That’s not its intention.

It has been written to fill a gap in the academic literature: media studies texts have a blind spot when it comes to PR. Jim Macnamara argues that Denis McQuail’s classic Mass Communication Theory fails to mention PR even though it devotes sections to the influence of advertisers and special interest groups.

Meanwhile, journalism textbooks ‘also remain surprisingly silent on PR. Some do not mention PR at all.’ Those that do usually adopt the negative tone of equating PR with spin.

This book acts as a scholarly literature review to fill this gap; it is also based on primary research conducted amongst practitioners in Australia, UK, US and one developing country. This is where the author – an Australian professor – is so useful. He is an academic’s academic who has reviewed what others have written and provides a clear guide to the arguments.

He even draws on his experience as a public relations consultant in Australia as a case study. He once organised for Microsoft co-founder Bill Gates to speak to the media at short notice (1,200 people attended the event breaking the Press Club record). Macnamara comments that busy executives like Bill Gates rarely travel specifically to meet the media and it takes a media-savvy PR person to prioritise and facilitate interviews and appearances.

‘PR staff were front and centre of most arrangements and played a major part not only in Microsoft’s success but also in helping many journalists gain access for interview – and even in helping set up a meeting with the Prime Minister.’

Media relations – like public relations – should be a two-way street. ‘Generalized claims that PR negatively impacts and undermines journalism need to be questioned and subjected to test against empirical evidence.’

That’s not to deny the existence of a dark side. Macnamara discusses his firsthand experience of witnessing brown envelopes containing ‘travel expenses’ being handed to journalists attending media briefings in Indonesia (‘bigger and better media coverage could be obtained by paying larger transportation allowances’.)

Macanamara writes: ‘I have seen the good and bad of PR from the inside, as well as from the vantage point of an outside observer’.

He reviews international studies showing the influence of PR sources on reported news from the 1920s onwards, arguing that the influence of PR on journalism predates the more recent reduction in journalist staff levels. From this century, he cites the Cardiff University study from 2008 suggesting that ‘more than half of the content of leading British newspapers and broadcast networks was influenced by PR in some way.’

He cites plenty of studies into the negative perception of PR by journalists, and other research showing ‘a high degree of ambivalence among journalists about PR, possibly based on confusion, or a mixture of confusion, guilt and ignorance.’

‘Journalists view themselves as superior to PR practitioners in most respects, including in terms of ethics, social conscience, media knowledge, writing skills and even in personal morals.’ In other words, they are ‘self-righteous’.

By contrast, the PR practitioners interviewed acknowledged the importance of journalism to society. PR people understand the media and recognise the value of an independent media over ‘owned’ media channels because of the power of third party endorsement.

The author offers an academic frame through which to view this:

‘Media sociology informs us that media are situated and operate in a society, not separately outside it, and journalists need to navigate PR as an inevitable and unavoidable (sic) part of the societies in which they work. Furthermore, like all structures, PR can be enabling as well as disabling.’

Based on this research, the author categorises the media-facing PR person into five types:

Macnamara is our most prolific and impressive scholar. But his wide sweep does lead to errors: he turns Kevin Moloney American and Lee Salter female, for example.

This is a useful – important even – addition to the literature and it complements a similarly named book from a journalistic perspective that was published soon afterwards: John Lloyd and Laura Toogood’s Reuters Institute study Journalism and PR: News Media and Public Relations in the Digital Age published by I. B. Taurus.

The authors of both these books agree that public relations has welcomed the advent of digital and social media with more enthusiasm than most journalists and that there’s a new grey area around branded content or brand journalism. The boundaries are blurring between journalism and PR.

Among the proposals for the future are a rethinking of public relations to concern itself much more with the interests of the public. ‘Accordingly, public relations should not be aligned with, let alone be part of, the ‘dominant coalition’ in organization management… A more neutral or externalized position and disposition seems necessary, such as those adopted by legal counsel, auditors and ombuds. If those professional roles seem too lofty for PR, then the model of the diplomat is within easy reach for inspiration.’