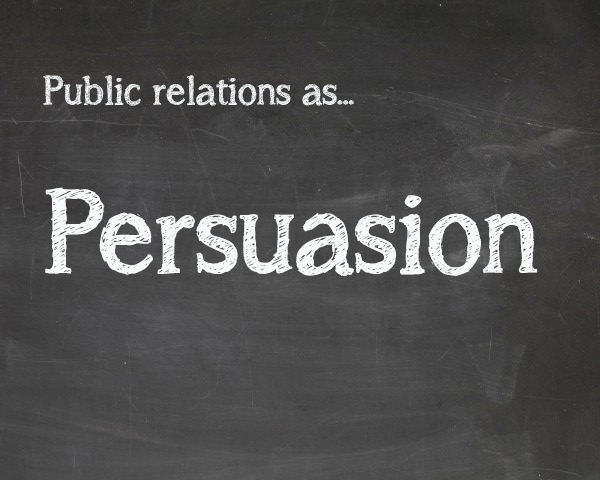 For me PR Place is a much needed coming together of public relations practice and theory. All too often the two seem estranged. Nowhere is this more apparent than in the relationship between persuasion and public relations.

For British authors Trevor Morris and Simon Goldsworthy the two are the same:

“Public Relations is the planned persuasion of people to behave in ways that further its sponsor’s objectives.”

For others, persuasion is an anathema and it is perceived to be on the slippery slope that skids through publicity and ends up with propaganda.

One of the founding fathers of public relations as an academic subject, James Grunig, argued strongly against persuasion which he sees as being one-way, ‘push’ communications. For Grunig ethical and socially responsible PR can only come out of a two-way ‘symmetrical’ dialogue between the organisation and its stakeholders.

But is he correct? Is it wrong to try to persuade people to stop smoking, eat healthily or buy a certain brand? I know how most of our clients would answer.

As public relations becomes ever more scientific in its practice, especially with the advent of big data and the interest in the links between psychology and communication, it is time to re-evaluate persuasion: how it works and how a study of it can make our practice more effective.

One of the most famous persuasion models of public relations that helps us understand the persuasion process better is the Elaboration Likelihood Model (ELM) developed by Petty and Cacioppo in 1986. This model suggests that there are two routes to persuasion – the central and the peripheral. The correct one for the chosen target audience depends on a number of factors such as the audience’s motivation to follow the argument; ability to understand it; and the opportunity to engage.

The central route implies the audience has the motivation, ability and opportunity to carefully evaluate a communication approach based on rational arguments. The peripheral route by contrast suggests a better response can be elicited by the use of cues and symbols.

The ELM model provides insights into how people today are open to persuasion in a world of info-besity.

We can surmise that many of our audiences perceive themselves to be drowning in a sea of data. In addition, the traditional sources of authority that helped them sift what is relevant and true are now in crisis: think of declining trust in government, corporates and even NGOs let alone the rise of fake news.

Audiences lack the time to filter information and they do not know who to trust to help them do it. So, we can conclude the central route to persuasion used by many organisations which would be to state the facts of their case is not going to have the sway such an approach perhaps had in the past.
By contrast we can see how the peripheral approach to persuasion is possibly more suited to today’s world. Catchy visuals, smart web design, the use of celebrities, hashtags and the viral video are more likely to have the cut-through we need.

This need not necessarily be about dumbing down debate but rather taking it one step further to get quickly to the heart of the matter in an engaging way. After all I have heard more than one journalist remark it is easier to write for The Times than the Sun.

Many writers suggest we return to the works of Aristotle who was writing in the 4th Century BC if we want to sharpen up our persuasive skills.

Rhetoric to the rescue

This is a school of thought that sees PR through a rhetorical prism. We are perhaps more used to hearing rhetoric used as a derogatory term but for theorists such as Robert Heath, PR is about the ethical deployment of rhetoric in a search for shared meaning. It is about a two-way communication of ideas where each side presents their case until mutual understanding is attained. But how best to do this in today’s world?

The rhetorical tradition puts much emphasis on what is called Ethos – or the character of what we would now call the spokesperson. Ron Smith in his book Strategic Planning for Public Relations suggests that a credible spokesperson should exhibit the three Cs of effective communications: Credibility, Charisma and Control. This is the thinking that guides the selection of the correct spokesperson in a crisis situation. Look for the person who can be seen as being in charge of the situation and who can put things right but who also can demonstrate compassion for the victims.

Rhetorical thinking suggests that it is important to decide how similar to the audience the spokesperson needs to be. Credible speakers should be like the audience – homophily – unless the subject concerns different experiences or expertise in which case they should be disimilar – heterophily.

The rise of the influence of popular YouTubers such as DanTDM and Logan Paul demonstrates the importance of homophily amongst younger audiences. We can also see this thinking at work in the recent elevation of Dana Loesch, an attractive mother of two, as the face of the National Rifle Association in the US as it fights against possible gun controls in the wake of a series of school massacres.

Logos, the second plank of this rhetorical tradition, is according to Smith to use an appeal to reason. As we have seen from the ELM model this would be to take a central route to persuasion which as we have seen above can be difficult with some of today’s audiences. Smith gives some alternative ways to deploy logic and reason.

For example, we may use analogies, using familiar situations that are analogous to the issue we are seeking to highlight. One example of this is the highly successful campaign around the detection of strokes. The campaign uses the analogy of a fire raging through the brain to illustrate how a stroke, if not diagnosed and treated rapidly, can quickly take out successive cognitive abilities such as speech and movement.

If Logos implies reason then Pathos, the third and final plank of this approach, suggests a more emotional appeal. Here we would be following the more peripheral route – if we remember the ELM model – to persuasion.

Smith divides emotional appeals into positive and negative types. Positive appeals involve the deployment of values such as love (which includes compassion and sympathy), virtue, humour and even sex. We can think of many campaigns that deploy such ‘warm’ appeals from puppy dogs advertising toilet tissue to the jolly Father Christmas in the seasonal Coca Cola advertising campaign.

When it comes to the influence of psychology in recent thinking on persuasion two theories instantly spring to my mind. The Theory of Reasoned Action, developed originally by Fishbein and Ajzen in 1967, suggests individuals carry out a complicated process of evaluation of a given communication message weighing up different influences. The recipient will consider, for example, the opinions of friends and family; their existing beliefs and attitudes towards the message subject; and to what extent they believe they can or should comply.

This suggests successful persuasion requires the alteration of one or more of these factors. For example, the introduction of new, more relevant beliefs to replace those already held; attempts to highlight supportive opinions of those the recipient may respect and listen to, celebrity endorsement or peer pressure, for example (changing the ‘subjective norm’); and finally, a self-efficacy message component to convince the recipient of an obvious and easily attained positive result for them as an individual. This approach requires us to research extensively before carrying out our communication programme. To change our target audience’s beliefs, attitudes and values we first need to know what they are.

The other theory from psychology that has proved its worth time and time again in modern thinking around persuasion and communication is that of Cognitive Dissonance which was developed by Leon Festinger in 1957. The theory of Cognitive Dissonance chiefly highlights the human need for cognitive consistency or balance. Dissonance occurs when a person holds two clearly incongruent thoughts that they cannot resolve – the world is a wonderful place but evil people can kill thousands of innocent people in a single day.

We can see how some turn to religion to resolve the big questions such as these, and, to use Festinger’s approach, reduce the pain and uncertainty caused by such dissonance. Indeed cognitive dissonance suggests a degree of self-persuasion is necessary as recipients are actively encouraged by successful communication to reduce dissonance.

Cognitive Dissonance suggests that behaviour can influence beliefs rather than the other way round. Experimenters were surprised to discover that paying students less to endorse a monotonous task to others was more effective than paying them more. The theorists suggested that earning less made the participants more enthusiastic as they sought to justify the time and effort they had expended which could not be justified by the paltry fee they had been paid.

Similarly, by encouraging people to publicly advocate a position with which they disagree we may find them over time changing their opinion. Or by pushing message recipients into publicly committing to an action we actually encourage them to follow through. This is the type of thinking that underlies the work of Dr Robert Cialdini which in turn led to the rise of ‘nudge theory.’

In one well-known experiment ‘no shows’ in doctors’ surgeries were slashed by simply getting the doctor’s receptionist to request that the individual repeat back or write down the time they had been given for their appointment.

In conclusion there really is a science of persuasion and understanding better how this process works can improve our chances of deploying communication techniques to bring about behavioural change.

Effective persuasion can also be seen as two-way as to work it requires a detailed understanding of our audiences and stakeholders and a need to engage with their perception of the situation.

Many of the criticisms aimed at persuasion rest on the idea that our audiences are passive recipients of persuasive messages and lack the resources to challenge what they are being told. Does that sound much like today’s audiences? Perhaps the rhetorical tradition’s idea of a battle for ideas is a more apt metaphor and public relations as advocacy need not be a concept we should be ashamed of any more. 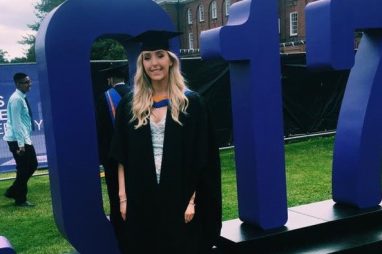 A PR student’s guide to dissertations

A supervisor and a student offer their advice on how to approach an undergraduate dissertation in public relations. 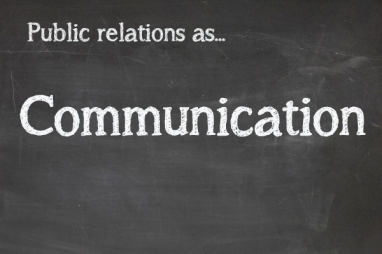 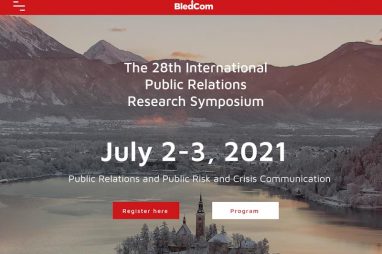 Dealing with a communicative virus

Thomas Stoeckle summarises the themes and discussions at this year's virtual BledCom conference.