Gamechanger: the rules of digital PR

In hindsight, everything did change around the time of the millennium. It wasn’t the much-feared millennium bug, but rather a combination of factors affecting technology, media and society.

Google was born in 1998. The early years of this century then saw the emergence of social media and the arrival of smartphones.

This has changed the media landscape and reduced the power of mass media advertising (a trend identified by Al Ries and Laura Ries in their 2002 book: The Fall of Advertising and the Rise of PR.)

Yet this did not usher in a triumphant age of public relations. Instead, a new industry emerged from the dominance of Google and the shift from traditional to social media. This new search marketing industry saw an opportunity to knock public relations off its perch while earning larger fees through mastery of little-understood digital techniques.

The scramble was on: could public relations people upskill before becoming obsolete?

Meanwhile, something surprising was happening in the booming world of search marketing: Panda, Penguin, Pigeon and Hummingbird. No, these aren’t characters from a new Pixar movie – they’re the names of some of the most significant Google algorithm updates over the last few years.

The ‘black hat’ link-building techniques previously adopted by a minority of SEO experts to manipulate Google, no longer work. Those trying to game the system paid heavily and were banned from the search engines. As a result, SEOs and digital marketers needed to develop strong outreach campaigns aimed at gaining high-quality links from relevant websites (including online media sites).

In other words, the SEO industry needed to acquire public relations skills.

Clearly, there’s a sweet spot in the middle for those who have updated their skills in ‘traditional PR’ (understood to involve media relations) and who can work with digital and technical experts in order to optimise websites, to measure campaigns and to prove a return on investment (ROI).

There’s also great demand from the many people working in digital marketing and tasked with outreach, link building or content marketing to learn about the when and how of pitching ideas and developing mutually beneficial relationships (and not just spamming inboxes with one-way sales pitches).

Our new free PR Place Guide to Digital PR explains how public relations is adapting to the digital media landscape and provides a primer of essential search marketing terms and concepts. Download the guide using the form below.

For more sophisticated lessons in how to develop a strategic approach to digital PR, PR Academy is among the first to offer the new CIPR Specialist Diploma in Digital Communications, starting in October. 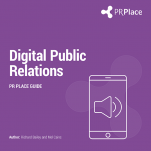 Thank you for downloading our guide. We hope you find it helpful and enjoyable. We are adding new ones all the time, so check back regularly.